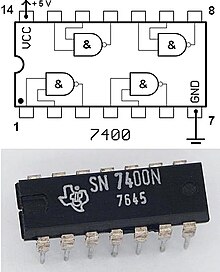 In digital electronics, a NAND gate (NOT-AND) is a logic gate which produces an output which is false only if all its inputs are true; thus its output is complement to that of an AND gate. A LOW (0) output results only if all the inputs to the gate are HIGH (1); if any input is LOW (0), a HIGH (1) output results. A NAND gate is made using transistors and junction diodes. By De Morgan's laws, a two-input NAND gate's logic may be expressed as A • B=A+B, making a NAND gate equivalent to inverters followed by an OR gate.

One way of expressing A NAND B is

signifies AND and the bar signifies the negation of the expression under it: in essence, simply

NAND gates with two or more inputs are available as integrated circuits in transistor-transistor logic, CMOS, and other logic families.

There are three symbols for NAND gates: the MIL/ ANSI symbol, the IEC symbol and the deprecated DIN symbol sometimes found on old schematics. For more information see logic gate symbols. The ANSI symbol for the NAND gate is a standard AND gate with an inversion bubble connected.

NAND gates are basic logic gates, and as such they are recognised in TTL and CMOS ICs. 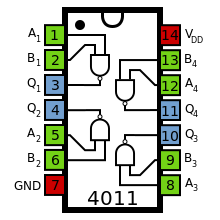 Diagram of the NAND gates in a CMOS type 4011 integrated circuit.

These devices are available from most semiconductor manufacturers such as Fairchild Semiconductor, Philips or Texas Instruments. These are usually available in both through-hole DIL and SOIC format. Datasheets are readily available in most datasheet databases.

The NAND gate has the property of functional completeness, which it shares with the NOR gate. That is, any other logic function (AND, OR, etc.) can be implemented using only NAND gates. [1] An entire processor can be created using NAND gates alone. In TTL ICs using multiple-emitter transistors, it also requires fewer transistors than a NOR gate.

As NOR gates are also functionally complete, if no specific NAND gates are available, one can be made from NOR gates using NOR logic. [1]