From Wikipedia, the free encyclopedia
(Redirected from Mustelids)
Family of mammals

The Mustelidae ( /mʌˈstɛlɪdiː/; [2] from Latin mustela, weasel) are a family of carnivorous mammals, including weasels, badgers, otters, ferrets, martens, minks and wolverines, among others. Mustelids ( /ˈmʌstɪlɪdz/ [3]) are a diverse group and form the largest family in the suborder Caniformia of the order Carnivora. They comprise about 66 to 70 species in nine subfamilies. [4]

Mustelids vary greatly in size and behaviour. The smaller variants of the least weasel can be under 20 cm (8 in) in length, while the giant otter of Amazonian South America can measure up to 1.7 m (5 ft 7 in) and sea otters can exceed 45 kg (99 lb) in weight. Wolverines can crush bones as thick as the femur of a moose to get at the marrow, and have been seen attempting to drive bears away from their kills. The sea otter uses rocks to break open shellfish to eat. Martens are largely arboreal, while European badgers dig extensive tunnel networks, called setts. Only one mustelid has been domesticated; the ferret. Tayra are also kept as pets (although they require a Dangerous Wild Animals licence in the UK), or as working animals for hunting or vermin control. Others have been important in the fur trade—the mink is often raised for its fur.

Being one of the most species-rich families in the order Carnivora, the family Mustelidae also is one of the oldest. Mustelid-like forms first appeared about 40 million years ago (Mya), roughly coinciding with the appearance of rodents. The common ancestor of modern mustelids appeared about 18 Mya. [4]

Within a large range of variation, the mustelids exhibit some common characteristics. They are typically small animals with elongated bodies, short legs, short skulls, short, round ears, and thick fur. [5] Most mustelids are solitary, nocturnal animals, and are active year-round. [6]

Most mustelid reproduction involves embryonic diapause. [8] The embryo does not immediately implant in the uterus, but remains dormant for some time. No development takes place as long as the embryo remains unattached to the uterine lining. As a result, the normal gestation period is extended, sometimes up to a year. This allows the young to be born under favorable environmental conditions. Reproduction has a large energy cost, so it is to a female's benefit to have available food and mild weather. The young are more likely to survive if birth occurs after previous offspring have been weaned.

Mustelids are predominantly carnivorous, although some eat vegetable matter at times. While not all mustelids share an identical dentition, they all possess teeth adapted for eating flesh, including the presence of shearing carnassials. One characteristic trait is a meat-shearing upper-back molar that is rotated 90°, towards the inside of the mouth. [9] [10] With variation between species, the most common dental formula is 3.1.3.13.1.3.2. [6] 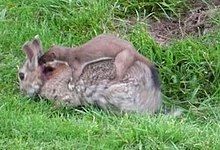 The fisher, tayra, and martens are partially arboreal, while badgers are fossorial. A number of mustelids have aquatic lifestyles, ranging from semiaquatic minks and river otters to the fully aquatic sea otter, which is one of the few nonprimate mammals known to use tools while foraging. It uses "anvil" stones to crack open the shellfish that form a significant part of its diet. It is a " keystone species", keeping its prey populations in balance so some do not outcompete the others and destroy the kelp in which they live.

The black-footed ferret is entirely dependent on another keystone species, the prairie dog. A family of four ferrets eats 250 prairie dogs in a year; this requires a stable population of prairie dogs from an area of some 500 acres (2.0 km2).

Skunks were formerly included as a subfamily of the mustelids, but are now regarded as a separate family (Mephitidae). [11] Mongooses bear a striking resemblance to many mustelids, but belong to a distinctly different suborder—the Feliformia (all those carnivores sharing more recent origins with the cats) and not the Caniformia (those sharing more recent origins with the dogs). Because mongooses and mustelids occupy similar ecological niches, convergent evolution has led to similarity in form and behavior. [12] 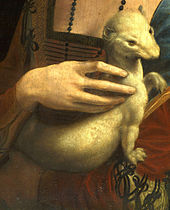 Several mustelids, including the mink, the sable (a type of marten), and the stoat (ermine), possess furs that are considered beautiful and valuable, so have been hunted since prehistoric times. From the early Middle Ages, the trade in furs was of great economic importance for northern and eastern European nations with large native populations of fur-bearing mustelids, and was a major economic impetus behind Russian expansion into Siberia and French and English expansion in North America. In recent centuries fur farming, notably of mink, has also become widespread and provides the majority of the fur brought to market.

One species, the sea mink (Neogale macrodon) of New England and Canada, was driven to extinction by fur trappers. Its appearance and habits are almost unknown today because no complete specimens can be found and no systematic contemporary studies were conducted.

The sea otter, which has the densest fur of any animal, [13] narrowly escaped the fate of the sea mink. The discovery of large populations in the North Pacific was the major economic driving force behind Russian expansion into Kamchatka, the Aleutian Islands, and Alaska, as well as a cause for conflict with Japan and foreign hunters in the Kuril Islands. Together with widespread hunting in California and British Columbia, the species was brought to the brink of extinction until an international moratorium came into effect in 1911.

Today, some mustelids are threatened for other reasons. Sea otters are vulnerable to oil spills and the indirect effects of overfishing; the black-footed ferret, a relative of the European polecat, suffers from the loss of American prairie; and wolverine populations are slowly declining because of habitat destruction and persecution. The rare European mink (Mustela lutreola) is one of the most endangered mustelid species. [14]

The ferret, a domesticated European polecat, is a fairly common pet.

The oldest known mustelid from North America is Corumictis wolsani from the early and late Oligocene (early and late Arikareean, Ar1–Ar3) of Oregon. [1] Middle Oligocene Mustelictis from Europe might be a mustelid, as well. [1] Other early fossils of the mustelids were dated at the end of the Oligocene to the beginning of the Miocene. Which of these forms are Mustelidae ancestors and which should be considered the first mustelids is unclear. [15]

The fossil record indicates that mustelids appeared in the late Oligocene period (33 Mya) in Eurasia and migrated to every continent except Antarctica and Australia (all the continents that were connected during or since the early Miocene). They reached the Americas via the Bering land bridge.

Fossil mustelids Extinct genera of the family Mustelidae include:

Multigene phylogenies constructed by Koepfli et al. (2008) [21] and Law et al. (2018) [4] found that Mustelidae comprises eight living subfamilies. The early mustelids appear to have undergone two rapid bursts of diversification in Eurasia, with the resulting species spreading to other continents only later. [21]