Mummies are commonly featured in horror genres as undead creatures wrapped in bandages. Similar undead include skeletons and zombies. 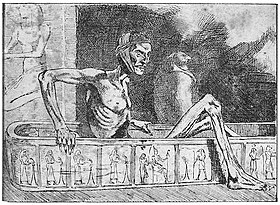 An illustration by Martin van Maële of the mummy from " Lot No. 249" an 1892 Gothic horror short story by British writer Arthur Conan Doyle.

The mummy genre has its origins in the 19th century when Egypt was being colonized by France and, subsequently, by Victorian Britain. The first living mummies in fiction were mostly female, and they were presented in a romantic and sexual light, often as love interests for the protagonist; this metaphorically represented the sexualized Orientalism and the colonial romanticization of the East. Notable examples of this trend include The Mummy's Foot by Théophile Gautier, The Jewel of Seven Stars by Bram Stoker, The Ring of Thoth by Arthur Conan Doyle, She: A History of Adventure and Smith and the Pharaohs by H. Rider Haggard, My New Year's Eve Among the Mummies by Grant Allen, The Unseen Man's Story by Julian Hawthorne, and Iras: A Mystery by H. D. Everett; the latter actually has the protagonist marry a mummy which takes on the form of a beautiful woman. [1] [2] [3]

Starting from the 1930s, the "romantic mummy" was supplanted by the "monster mummy", pioneered by Boris Karloff in the 1932 movie The Mummy; mummies thus joined the pantheon of 19th century Gothic monsters, alongside Count Dracula and Frankenstein's monster. [1]

However, the end of the 20th century saw the revival of interest in the "romantic mummy" archetype, starting with the 1989 novel The Mummy, or Ramses the Damned by Anne Rice, which involved a sexual relationship between a benevolent male mummy and a female archaeologist. [1] The trend intensified throughout the late 1990s, the 2000s, and the 2010s: modern works of fiction featuring romanticized living mummies include the 1997 horror fiction novella Don't Tell Mummy by Tom B. Stone, [4] the Inca Mummy Girl episode of the TV series Buffy the Vampire Slayer, the 2006 fantasy novel Freaks: Alive on the Inside by Annette Curtis Klause, and the 2011 video game The Next Big Thing by Pendulo Studios. [5]

During the 20th century, horror films and other mass media popularized the notion of a curse associated with mummies (see Curse of the pharaohs). The 1922 discovery of Tutankhamun's tomb by archaeologist Howard Carter brought mummies into the mainstream.