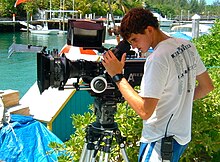 Many states provide financial incentives for film and television production.

Movie production incentives are tax benefits offered on a state-by-state basis throughout the United States to encourage in-state film production. Since the 1990s, states have offered increasingly competitive incentives to lure productions away from other states. The structure, type, and size of the incentives vary from state to state. Many include tax credits and exemptions, and other incentive packages include cash grants, fee-free locations, or other perks.

Proponents of these programs point to increased economic activity and job creation as justification for the credits. Others argue that the cost of the incentives outweighs the benefits and say that the money goes primarily to out-of-state talent rather than in-state cast and crew members.

Studies show that tax incentives for movie productions have low overall economic effects, with low rates of return for states that offer the incentives. [1] [2] [3] [4] [5]

Overall economic losses to the US due to runaway productions are difficult to measure, as the perceived economic benefit of film production could include benefits from tourism in the short and long-term, local job creation, and any number of other benefits. Most methods of measuring such economic benefit apply a multiplier to production costs in order to account for the lost opportunities from taxes not collected, jobs not created, and other revenues that are lost when a film is made outside of the US. A 1999 study by The Monitor Group estimated that in 1998 $10.3 billion was lost to the US economy due to runaway productions. [8]

Also in the 1990s, U.S. states saw the opportunity to launch their own production incentives as an effort to capture some of the perceived economic benefits of film and TV production. Louisiana was the first state to do so in 2001, and in 2002 passed legislation to further increase the scope its incentives. Over the next three years Louisiana experienced an increase in film and television productions some of which were nominated for Emmy Awards. The perceived success of Louisiana's incentive program did not go unnoticed by other states, and by 2009 the number of states which offered incentives was 44, up from 5 in 2002. [9] Critics have suggested that the increase in states offering incentives mirrors a race to the bottom or an arms race because states continue to increase the scope of their incentive packages to compete on a national level to not only maximize their individual benefits but also to stay ahead of their competitors. [9]

*GA - Georgia has transferable tax credits, meaning that production can sell tax credit to the state's taxpayers. Rates run at 20% on certified expenditures, including nonresident compensation, with an added 10% if the production holds end credit/exceptional GA promotional material. Basically, most productions are qualified for 30% total rate. Not applying to payments made to loan-outs, there is an individual compensation cap of $500k, which is also the minimum spend number. Unlike MA, there is no required final certification process, but the state offers a “verification review” at $55/hour per state auditor. This insulates purchasers of certified credits from recapture. [30]

*HI - This tropical state offers refundable tax credits where production receives a cash refund after filing tax return. This state's rates are 20% on certified production expenditures with a 5% extra credit for production in counties outside of Honolulu County. $15M is the tax credit cap per production with a minimum spend number of $200k. Many expenditures involving, and subject to, Hawaii tax are eligible. This includes the cost of flights and shipping equipment to and from Hawaii. [30]

*IA - As of November 24, 2009, Iowa has suspended new registration for incentives pending a criminal investigation into the handling of past film tax credits.

*LA - The state of Louisiana has redeemable tax credit where production can exchange tax credit for cash at an excellent rate of 88% of the tax credits earned after paying for the transfer fees. With a 25% base rate on certified production expenditures, there is a 5% increase to the base rate if over 60% of production takes place outside of metro New Orleans. These area-oriented rules should be thoroughly researched before addressing redeemable tax credits. Louisiana has a $150M annual reservation cap, which can possibly allocate from future years (if exhausted). Additionally, there is a $180M annual cap on tax credits held with the state. These events can unfortunately delay the monetization of credits. [30]

*ME - Maine's wage rebate is effectively a cash rebate and is considered as such in this table.

*NM - In New Mexico, the type of incentive is refundable tax credit, so production obtains a cash refund after submitting tax return. This states rates include: 25% on certified production expenditures for film;30% certified production expenditures for television;30% regarding resident BTL crewmembers when working in a qualified production facility;and 15% on nonresident BTL crewmember compensation (when meeting many conditions, like a high level of production activity). The annual claims cap in NM is $50M, and the minimum spend number is $500k for TV/features while the minimum for music videos/soundtracks is $50K. [30]

*OH - This Midwestern state offers production companies refundable tax credit which can be traded for a cash refund after filing tax return. Rates run at $30M on certified production expenditures with an annual cap of $40M. This yearly program cap is reserved by application. The minimum spend number for Ohio is $300K and, like most states, loan-outs must be registered with the state. [30]

*PA - Pennsylvania has transferable tax credit where production can sell tax credit to PA taxpayers. Rates are 25% on certified production expenditures and 5% credit added to those expenditures if using a qualified facility and meeting other requirements. The annual cap is reserved by application, set at $65m, with a $15m aggregate ATL compensation cap. The minimum spend number for PA is 60% of the PA expenditure budget. [30]

Proponents of production incentives for the film industry point to increases in job creation, small business and infrastructure development, the generation of tax revenue, and increased tourism as positive byproducts of the incentives. [31] Supporters also maintain that MPIs are a net benefit to the states because they attract productions that would have gone elsewhere.

The immediate effect of a tax incentive is the direct production spend for the region in hotel rooms for visiting cast and crew, lumber for sets, food for catering, fuel for trucks and generators, to the secondary expenditures of crew members who go to local restaurants for dinner, the dry cleaners for their laundry, and the need for everyday sundry items from toothpaste to shampoo. These expenses average in the millions of dollars on a typical Studio feature which usually carries approximately a 100 traveling crew members and employs another 100 crew locally. [32]

Second, if the area did not previously have an existing infrastructure, the production provides hands-on training for local employees to learn the stock in trade of filmmaking and helps to develop the experienced crew base that will make the area more valuable in reducing the number of crew a production will need to import the next time around. [33]

Film tourism has become a significant multiplier of the initial investment by the region in providing increased tourism marketing opportunities at a fraction of the media buy necessary through taking advantage of the extensive marketing efforts by a studio. [34] [35] The impacts of film tourism have been met with skepticism, as examples of the phenomenon tend to be anecdotal and a reliable method for measurement is hard to come by. [36] Academic study of film tourism points to key elements that are needed for film tourism: iconic locations (like the baseball field in "Field of Dreams"), commercial success and on-location filming in the places where the underlying story is set. [37] Most films produced in leading incentive states do not meet these criteria.

Those who oppose movie production incentives offer arguments that refute those made by supporters of the programs.

Critics propose that unilateral or multilateral moratoriums [40] and federal intervention be used to solve these economic inefficiencies. [9] For example, in a 2009 article, entertainment attorney Schuyler M. Moore proposed a federal tax credit combined with complete federal preemption of all state-level tax credits in order to halt the states' race into insolvency. [41]

Some states have attempted to evaluate the economic impact of their movie production incentives to establish whether the benefits outweigh the costs.

In 2008, the Connecticut Department of Economic and Community Development released a report on the economic impacts of the state's film production tax incentive program. [42] The report concludes the tax incentive program has a "modest" impact on the state's economy, returning $1.07 of real gross state product (RSGP) for every dollar spent (or tax revenue dollar foregone). The report also finds that the program in FY2007 stimulated $55.1 million in film production spending, generated $20.72 million in new RGSP, and created 395 full-time equivalent (FTE) jobs. [42]

An analyst at the Federal Reserve Bank of Boston reached a different conclusion when reviewing the tax incentive program in 2009, finding that the program does not pay for itself and that the economic benefits are short-lived and easily lost if the program is discontinued. [43]

In the face of 2011 budget shortfalls, Connecticut state legislators are considering ending the tax incentive program to balance the budget. [44]

In January 2011, the Massachusetts Department of Revenue released its third annual report detailing the impact of the state's film tax incentive program, specifically focusing on the productions and tax credits of 2009. [18]

The report's key findings for 2009 showed:

At a 2011 legislative hearing on the film tax credit program, policy analysts from Massachusetts think tanks criticized the film tax incentive program. [45] Critics have also complained that much of the tax credit money goes to cover the pay of celebrity actors. [46] Debate within state government over the value of the tax credits in the face of budget shortfalls led Governor Deval Patrick to attempt to cap the tax credit in 2010. Although this effort was not successful, some point to it as a reason for a decline in film productions in Massachusetts in recent years. [47]

A September 2010 report by the Michigan Senate Fiscal Agency detailed the economics underlying the state's incentive programs. [48] In particular it found that:

Supporters of the film tax credit in Rhode Island are urging state officials to maintain the program, pointing to a study showing the program created more than 4,000 jobs in the state between 2006 and 2009. [50] Critics of the program say the ubiquity of incentives in most states have diminished Rhode Island's competitive advantage and that the funds would be better spent elsewhere. [50]