From Wikipedia
https://en.wikipedia.org/wiki/Mount_Eerie
American indie rock/folk band
This article is about the band. For the album, see Mount Eerie (album). For other uses, see Mount Erie (disambiguation).

Mount Eerie is the musical project of American songwriter and producer Phil Elverum. Elverum (also of The Microphones) is the principal member of the band, but has collaborated with many other musicians on his records and in live performances. Most of Mount Eerie's releases have been issued on Elverum's label P.W. Elverum & Sun, Ltd., and feature highly detailed packaging with his own artwork. 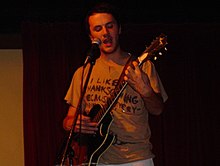 Following the release of the Microphones' Mount Eerie album, Elverum announced that he would no longer use the Microphones moniker, opting instead to record under the name Mount Eerie, after the area in Anacortes, Washington called Mount Erie. In an interview with CITR-FM's Discorder in September 2003, Elverum gave his reasons for this change: "Mount Eerie is a new project. The Microphones was completed, or at least at a good stopping point. I did it because I am ready for new things. I am new." [1] Around this time, Elverum also changed the spelling of his own surname (previously, Elvrum). [2]

Elverum returned to his hometown of Anacortes after spending several years living in Olympia, Washington whilst recording for K Records, and established his own label and imprint, P.W. Elverum & Sun, Ltd. The first official Mount Eerie studio album in Phil's eyes was No Flashlight, released in August 2005. The original pressing featured an extremely large fold-out sleeve with extensive footnotes and explanations. Following pressings of the album feature more simple packaging with the original liner notes and poster absent. 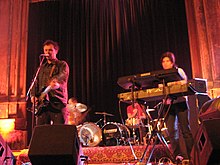 Elverum has continued to tour and record prolifically in recent years, to considerable critical acclaim. [4] Noteworthy releases have included Mount Eerie pts. 6 & 7 (a hardcover coffee-table book of Elverum's photography, packaged with a 10" record), Lost Wisdom (recorded with Julie Doiron and Frederick Squire), and Wind's Poem (a black metal-influenced album, recorded with Nicholas Krgovich). In 2012, Elverum released two albums, Clear Moon and Ocean Roar. He was also chosen to perform at Jeff Mangum's All Tomorrow's Parties festival in Minehead, England. [5] An admirer of Neutral Milk Hotel, he stated it was an "honor to be chosen." [6] In 2013, Elverum was a part of the Primavera Sound line-up. [7] A new Mount Eerie album entitled Sauna was released on February 2, 2015. [8]

In January 2017, the song "Real Death" was released from the forthcoming album A Crow Looked at Me. [9] A second single, "Ravens", was released on February 15. [10] On March 24, A Crow Looked at Me was released to high critical praise. Exclaim!'s Alex Hudson scored the album a 9 out of 10, calling the record an "emotionally nuanced meditation on death that is both heartbreaking and hopeful."

January 2018, the album Now Only was announced along with the release of the album track "Distortion". A press release indicated that the album was written in 2017 shortly following the death of Geneviève Castrée, Phil's wife. The album was officially released on March 16, 2018, to positive reviews, with The Atlantic describing the album as a progression from A Crow Looked at Me: "not an experience of total sadness, featuring flashes of irony, hope, and love". [11]

After touring North America in the summer of 2017, Elverum played songs from A Crow Looked at Me across Europe and Australasia. [12] [13] The second of these shows became (after), a live recording eventually released in September 2018 and was well received by Pitchfork who noted "the most striking thing about (after) is that, even after so many performances, these songs sound as raw as they did when Elverum first committed them to paper and tape". [14] On September 25, 2019, Elverum announced a sequel to his 2008 collaboration with Julie Doiron, Lost Wisdom, entitled Lost Wisdom Pt. 2. It was released on November 8, 2019. Two singles were released. [15] [16] On January 28, 2020, Elverum announced a North American tour in support of the album. [17] That same week as the announcement Elverum toured through Canada with singer Angel Olsen. [17] The tour was set to take place in April of that year with Julie Doiron accompanying him, however was cancelled and rescheduled to October 2020 due to the COVID-19 pandemic. [17] [18] Elverum also announced a show with Angel Olsen at Brooklyn's Prospect Park Bandshell on July 22. [18]

In 2020, Elverum appeared on a charity compilation album entitled The Song Is Coming from Inside the House. All proceeds from the album will go to Groundswell's Rapid Response Fund, a charity intended to help "provide fast funding to grassroots organizations led by women of color, trans people of color, and low-income women and trans people in critical". [19] [20] Elverum was also featured on the 20th anniversary reissue Mirah's debut album, You Think It’s Like This but Really It’s Like This; performing an "Of Pressure" cover. [21]

Elverum's music under the Mount Eerie moniker expresses a close relationship to nature and the Pacific Northwest, in particular the minute details. [22] [23] Early Mount Eerie albums often discussed how "the distinction between wild and not wild is an illusion". [24] In a 2014 interview, Elverum discussed how his choice for moniker coming from a mountain in Anacortes was a way of infusing a sense of regional connection between the music and the place. [25]

His lyrical matter has been seen by some to be more introspective than his work before the name change. [25] Brady Baker of Spectrum Culture called Mount Eerie "a solid foundation for an ever-expanding lyrical labyrinth that centers on his introspective philosophy." [26] Eric Hill of Exclaim! believed the opposite, writing that Elverum's work under the Mount Eerie title is more "universal and, at times, hermetic." [23]

Elverum also believed that the songs under Mount Eerie were more universal describing them as "this one long chain, about the idea of singing from the point of view of this dark looming mountain shape, while Microphones songs, historically, have been more personally narrative, maybe more human." [27] After the death of Elverum's wife, Geneviève Castrée, in 2016 his lyrics became more direct and plainspoken. [28]

Musically, Elverum has experimented with "black metal, lo-fi krautrock, fuzzy post-rock textures and Auto-Tune experimentation". [29] My Bloody Valentine, George Gurdjieff and black metal have all been cited by Elverum as influences on the project. [30]

EPs and other albums