The mouflon (Ovis gmelini) is a wild sheep native to Cyprus, the Caspian region from eastern Turkey, Armenia, Azerbaijan, and Iran. [1] It is thought to be the ancestor of all modern domestic sheep breeds. [2] [3]

Ovis gmelini was the scientific name proposed by Edward Blyth in 1841 for wild sheep in the Middle East. [4] In the 19th and 20th centuries, several wild sheep were described that are considered mouflon subspecies today: [5]

Five mouflon subspecies of are distinguished by MSW3: [8]

The European mouflon was once thought to be a subspecies of the mouflon, but is now considered to be a feral descendant of the domestic sheep (Ovis aries), as Ovis aries musimon. [9]

Relation to other sheep

Based on comparison of mitochondrial cytochrome b gene sequences, three groups of sheep ( Ovis) have been identified: Pachyceriforms of Siberia ( snow sheep) and North America ( bighorn and Dall sheep), Argaliforms ( argali) of Central Asia, and Moufloniforms ( urial, mouflon, and domestic sheep) of Eurasia. [10] However, a comparison of the mitochondrial DNA control region (CR) found that two subspecies of urial, Ovis vignei (or orientalis) arkal and O. v./o. bochariensis, grouped with two different clades of argali (Ovis ammon). [3]

The ancestral sheep is presumed to have had 60 chromosomes, as in goats (Capra). Mouflon and domestic sheep have 54 chromosomes, with three pairs (1+3, 2+8, 5+11) of ancestral acrocentric chromosomes joined to form bi-armed chromosomes. This is in contrast to the argali and urial, which have 56 and 58 chromosomes respectively. If the urial is as closely related to the mouflons as mitochondrial DNA indicates, then two chromosomes would need to have split during its evolution away from the mouflon (sub)species. [10] 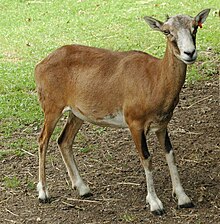 Mouflon have reddish to dark brown, short-haired coats with dark back stripes and black ventral areas and light-colored saddle patches. The males are horned; some females are horned, while others are polled. The horns of mature rams are curved almost one full revolution (up to 85 cm). Mouflon have shoulder heights of around 0.9 m and body weights of 50 kg (males) and 35 kg (females). [11]

The mouflon occurs in the Lesser Caucasus in southeastern Turkey, Armenia and Azerbaijan, as well as in Iran's western Alborz region and the Zagros Mountains spanning across eastern Iraq and western Iran. [1] It was possibly introduced to Cyprus during the Neolithic period. [12]

Mouflon rams have a strict dominance hierarchy. Before mating season or "rut", which is from late autumn to early winter, rams try to create a dominance hierarchy to determine access to ewes (female mouflon) for mating. Mouflon rams fight one another to obtain dominance and win an opportunity to mate with females. Mouflons reach sexual maturity at the age of 2 to 4 years. Young rams need to obtain dominance before they get a chance to mate, which takes another 3 years for them to start mating. Mouflon ewes also go through a similar hierarchy process in terms of social status in the first 2 years, but can breed even at low status. Pregnancy in females lasts 5 months, in which they produce one to two offspring.[ citation needed]

A mouflon was cloned successfully in early 2001, and lived at least seven months, making it the first clone of an endangered mammal to survive beyond infancy. [13] [14] [15] This demonstrated that a common species (in this case, a domestic sheep) can successfully become a surrogate for the birth of an exotic animal such as the mouflon. If cloning of the mouflon can proceed successfully, it has the potential to reduce strain on the number of living specimens.

The mouflon is protected in Armenia and Azerbaijan. In Turkey and Iran, hunting is only allowed with a special license. The population in Cyprus is listed as a strictly protected species in the Habitats Directive of the European Union and has been listed in CITES Appendix I since November 2019. [1]

The wild sheep of Corsica were locally called mufro (male) and mufra (female). The French naturalist Buffon (1707–1788) rendered this in French as moufflon. The male mouflon is denominated in Corsica Mufro, and the female Mufra, from which the word Moufflon was formed; in Sardinia, the male is called Murvoni, and the female Murva, though it is not unusual to hear the peasants style both indiscriminately Mufion, which is a palpable corruption of the Greek Ophion. [16]