From Wikipedia, the free encyclopedia
Rock formation in the western United States

Type locality for the Morrison Formation above the town of Morrison, Colorado.

The Morrison Formation is a distinctive sequence of Upper Jurassic sedimentary rock found in the western United States which has been the most fertile source of dinosaur fossils in North America. It is composed of mudstone, sandstone, siltstone, and limestone and is light gray, greenish gray, or red. Most of the fossils occur in the green siltstone beds and lower sandstones, relics of the rivers and floodplains of the Jurassic period.

It is centered in Wyoming and Colorado, with outcrops in Montana, North Dakota, South Dakota, Nebraska, Kansas, the panhandles of Oklahoma and Texas, New Mexico, Arizona, Utah, and Idaho. Equivalent rocks under different names are found in Canada. [2] It covers an area of 1.5 million square kilometers (600,000 square miles), although only a tiny fraction is exposed and accessible to geologists and paleontologists. Over 75% is still buried under the prairie to the east, and much of its western paleogeographic extent was eroded during exhumation of the Rocky Mountains.

It was named after Morrison, Colorado, where some of the first fossils in the formation were discovered by Arthur Lakes in 1877. That same year, it became the center of the Bone Wars, a fossil-collecting rivalry between early paleontologists Othniel Charles Marsh and Edward Drinker Cope. In Colorado, New Mexico, and Utah, the Morrison Formation was a major source of uranium ore.

According to radiometric dating, the Morrison Formation dates from 156.3 ± 2 million years old ( Ma) at its base, [3] to 146.8 ± 1 million years old at the top, [4] which places it in the earliest Kimmeridgian, and early Tithonian stages of the late Jurassic. This is similar in age to the Solnhofen Limestone Formation in Germany and the Tendaguru Formation in Tanzania. The age and much of the fauna is similar to the Lourinhã Formation in Portugal. [5] Throughout the western United States, it variously overlies the Middle Jurassic Summerville, Sundance, Bell Ranch, Wanakah, and Stump Formations.

At the time, the supercontinent of Laurasia had recently split into the continents of North America and Eurasia, although they were still connected by land bridges. North America moved north and was passing through the subtropical regions.

The Morrison Basin, which stretched from New Mexico in the south to Alberta and Saskatchewan in the north, was formed during the Nevadan orogeny, a precursor event to later orogenic episodes that created the Rocky Mountains started pushing up to the west. The deposits from their east-facing drainage basins, carried by streams and rivers from the Elko Highlands (along the borders of present-day Nevada and Utah) and deposited in swampy lowlands, lakes, river channels and floodplains, became the Morrison Formation. [6]

In the north, the Sundance Sea, an extension of the Arctic Ocean, stretched through Canada down to the United States. Coal is found in the Morrison Formation of Montana, which means that the northern part of the formation, along the shores of the sea, was wet and swampy, with more vegetation. Aeolian, or wind-deposited sandstones, are found in the southwestern part, which indicates it was much more arid—a desert, with sand dunes.

Type locality of the Salt Wash Member near White Wash, Grand County, Utah. The Morrison Formation is underlain by the brick-red Summerville Formation.

The Jurassic-Cretaceous boundary is seen where the red and purple beds of the Morrison Formation abruptly contact the drab, gray bed of the overlying Cedar Mountain Formation. The contact is the K1 unconformity. Jessie's Twist, southwest of Green River City, Utah.

The Morrison Formation is subdivided into several members, the occurrence of which are varied across the geographic extent of the Morrison. Members are (in alphabetical order): [7] [8] 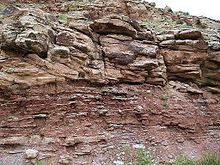 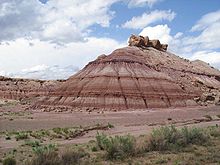 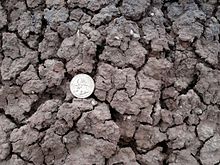 Other informal or disused designations of the Morrison include the Stockett Bed in Montana, an unofficial sub-unit which contains bituminous coal; [26] the outdated terms Casamero, Chavez, and Prewitt Sandstone for the Brushy Basin, Recapture, and Westwater Canyon, respectively; [27] [28] and the Bullington Member, which has been discarded entirely.

Main article: List of Paleobiota of the Morrison Formation 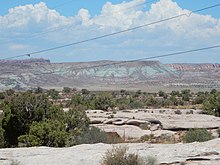 Though many of the Morrison Formation fossils are fragmentary, they are sufficient to provide a good picture of the flora and fauna in the Morrison Basin during the Kimmeridgian. Overall, the climate was dry, similar to a savanna but, since there were no angiosperms ( grasses, flowers, and some trees), the flora was quite different. Conifers, the dominant plants of the time, were to be found with ginkgos, cycads, tree ferns, and horsetail rushes. Much of the fossilized vegetation was riparian, living along the river flood plains. Along the rivers, there were fish, frogs, salamanders, lizards, crocodiles, turtles, pterosaurs, crayfish, clams, and mammaliforms. 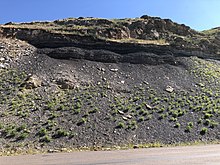 The dinosaurs were most likely riparian, as well. [6] Hundreds of dinosaur fossils have been discovered, such as Allosaurus, Ceratosaurus, Torvosaurus, Saurophaganax, Camptosaurus, Ornitholestes, several stegosaurs comprising at least two species of Stegosaurus and the slightly older Hesperosaurus, and the early ankylosaurs, Mymoorapelta and Gargoyleosaurus, most notably a very broad range of sauropods (the giants of the Mesozoic era). [29] Since at least some of these species are known to have nested in the area (Camptosaurus embryoes have been discovered), there are indications that it was a good environment for dinosaurs and not just home to migratory, seasonal populations. However, the large body mass of the sauropods has been interpreted as an adaptation to migration in times of drought. [6]

Sauropods that have been discovered include Diplodocus (most famously, the first nearly complete specimen of D. carnegii, which is now exhibited at the Carnegie Museum of Natural History, in Pittsburgh, Pennsylvania), Camarasaurus (the most commonly found sauropod), Brachiosaurus, Apatosaurus, Brontosaurus, Barosaurus, the uncommon Haplocanthosaurus and Supersaurus. The very diversity of the sauropods has raised some questions about how they could all co-exist. While their body shapes are very similar (long neck, long tail, huge elephant-like body), they are assumed to have had very different feeding strategies, in order for all to have existed in the same time frame and similar environment. 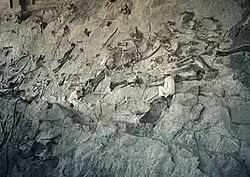 Locations where significant Morrison Formation fossil discoveries have been made include: 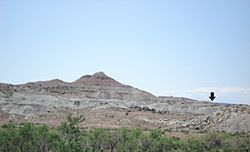 Fruita Paleontological Resource Area. One of the sites is denoted by the arrow.

The Morrison Formation contains uranium deposits, including the Jackpile uranium body discovered near Grants, New Mexico in 1951. [12] The ore deposits in the rich Grants mineral belt are concentrated in sandstone beds of the Westwater Canyon Member and the Jackpile Member. Mines in this belt produced 340,000,000 pounds (150,000,000 kg) of U3O8 between 1948 and 2002. The uranium was precipitated by plant debris and humate that acted as reducing agents. [32]