From Wikipedia
(Redirected from Monophyletic)
https://en.wikipedia.org/wiki/Monophyletic
Property of a group of including all taxa descendant from a common ancestral species
See also: Crown group

A phylogenetic tree: both blue and red groups are monophyletic. The green group is paraphyletic because it is missing a monophyletic group (the blue group) that shares a common ancestor—the lowest green vertical stem. 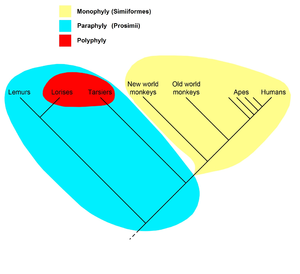 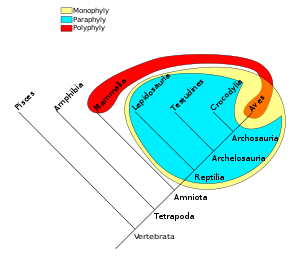 In cladistics for a group of organisms, monophyly is the condition of being a clade—that is, a group of taxa composed only of a common ancestor (or more precisely an ancestral population) and all of its lineal descendants. Monophyletic groups are typically characterised by shared derived characteristics ( synapomorphies), which distinguish organisms in the clade from other organisms. An equivalent term is holophyly. [1]

These definitions have taken some time to be accepted. When the cladistics school of thought became mainstream in the 1960s, several alternative definitions were in use. Indeed, taxonomists sometimes used terms without defining them, leading to confusion in the early literature, [2] a confusion which persists. [3]

The first diagram shows a phylogenetic tree with two monophyletic groups. The several groups and subgroups are particularly situated as branches of the tree to indicate ordered lineal relationships between all the organisms shown. Further, any group may (or may not) be considered a taxon by modern systematics, depending upon the selection of its members in relation to their common ancestor(s); see second and third diagrams.

The term monophyly, or monophyletic, derives from the two Ancient Greek words μόνος (mónos), meaning "alone, only, unique", and φῦλον (phûlon), meaning "genus, species", [4] [5] and refers to the fact that a monophyletic group includes organisms (e.g., genera, species) consisting of all the descendants of a unique common ancestor.

Conversely, the term polyphyly, or polyphyletic, builds on the ancient Greek prefix πολύς (polús), meaning "many, a lot of", [4] [5] and refers to the fact that a polyphyletic group includes organisms arising from multiple ancestral sources.

By comparison, the term paraphyly, or paraphyletic, uses the ancient Greek prefix παρά (pará), meaning "beside, near", [4] [5] and refers to the situation in which one or several monophyletic subgroups are left apart from all other descendants of a unique common ancestor. That is, a paraphyletic group is nearly monophyletic, hence the prefix pará.

On the broadest scale, definitions fall into two groups.