From Wikipedia, the free encyclopedia
Genus of reptiles 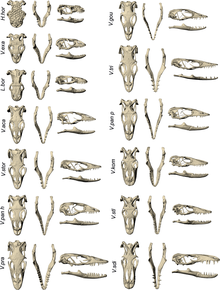 Monitor lizards are lizards in the genus Varanus, the only extant genus in the family Varanidae. They are native to Africa, Asia, and Oceania, and one species is also found in the Americas as an invasive species. About 80 species are recognized.

Monitor lizards have long necks, powerful tails and claws, and well-developed limbs. The adult length of extant species ranges from 20 cm (7.9 in) in some species, to over 3 m (10 ft) in the case of the Komodo dragon, though the extinct varanid known as megalania (Varanus priscus) may have been capable of reaching lengths more than 7 m (23 ft). Most monitor species are terrestrial, but arboreal and semiaquatic monitors are also known. While most monitor lizards are carnivorous, eating eggs, smaller reptiles, fish, birds, insects, and small mammals, some also eat fruit and vegetation, depending on where they live. [1]

The various species cover a vast area, occurring through Africa, the Indian subcontinent, to China, the Ryukyu Islands in southern Japan, south to Southeast Asia to Thailand, Malaysia, Brunei, Indonesia, the Philippines, New Guinea, Australia, and islands of the Indian Ocean and the South China Sea. The West African Nile monitor (Varanus stellatus) is now found in South Florida. [2] Monitor lizards also occurred widely in Europe in the Neogene, with the last known remains in the region dating to the Middle Pleistocene. [3]

Most monitor lizards are almost entirely carnivorous, [4] consuming prey as varied as insects, crustaceans, arachnids, myriapods, mollusks, fish, amphibians, reptiles, birds, and mammals. Most species feed on invertebrates as juveniles and shift to feeding on vertebrates as adults. Deer make up about 50% of the diet of adults of the largest species, Varanus komodoensis. [5] In contrast, three arboreal species from the Philippines, Varanus bitatawa, Varanus mabitang, and Varanus olivaceus, are primarily fruit eaters. [6] [7] [8] Although normally solitary, groups as large as 25 individual monitor lizards are common in ecosystems that have limited water resources.[ citation needed]

The genus Varanus is considered unique among animals in that its members are relatively morphologically conservative, yet show a very large size range. [9] Finer morphological features such as the shape of the skull and limbs do vary, though, and are strongly related to the ecology of each species. [10] [11]

Monitor lizards maintain large territories and employ active-pursuit hunting techniques that are reminiscent of similar-sized mammals. [12] The active nature of monitor lizards has led to numerous studies on the metabolic capacities of these lizards. The general consensus is that monitor lizards have the highest standard metabolic rates of all extant reptiles. [13]

Like snakes, monitor lizards have highly forked tongues that act as part of the "smell" sense, where the tips of the tongue carry molecules from the environment to sensory organs in the skull. The forked apparatus allows for these lizards to sense boundaries in the molecules they collect, almost smelling in "stereo". [14]

Monitor lizards have a high aerobic scope [13] [15] that is afforded, in part, by their heart anatomy. Whereas most reptiles are considered to have three-chambered hearts, the hearts of monitor lizards – as with those of boas and pythons – have a well developed ventricular septum that completely separates the pulmonary and systemic sides of the circulatory system during systole. [16] This allows monitor lizards to create mammalian-equivalent pressure differentials between the pulmonary and systemic circuits, [16] which in turn ensure that oxygenated blood is quickly distributed to the body without also flooding the lungs with high-pressure blood.

Anatomical and molecular studies indicate that all varanids (and possibly all lizards) are partially venomous. [17] [18] The venom of monitor lizards is diverse and complex, as a result of the diverse ecological niches monitor lizards occupy. [19] Monitor lizards are oviparous, [13] laying from seven to 38 eggs, [20] which they often cover with soil or protect in a hollow tree stump. Some monitor lizards, including the Komodo dragon, are capable of parthenogenesis. [21] 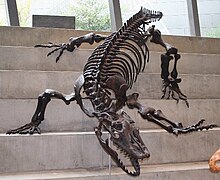 Varanus is the only living member of the family Varanidae. Varanidae last shared a common ancestor with their closest living relatives, earless "monitors", during the Late Cretaceous. The oldest known members of Varanidae are known from the Late Cretaceous of Mongolia. During the Eocene, the varanid Saniwa occurred in North America. The closest known relative of Varanus is Archaeovaranus from the Eocene of China, suggesting that the genus Varanus is of Asian origin. The oldest fossils of Varanus date to the early Miocene. [22]

Many of the species within the various subgenera also form species complexes with each other:

In English, they are known as "monitors" or "monitor lizards". The earlier term "monitory lizard" became rare by about 1920. [32] The name may have been suggested by the occasional habit of varanids to stand on their two hind legs and to appear to "monitor", [31] or perhaps from their supposed habit of "warning persons of the approach of venomous animals". [33] But all of these explanations for the name "monitor" postdate Linnaeus giving the scientific name Lacerta monitor to the Nile monitor in 1758, which may have been based on a mistaken idea by Linnaeus that the German word Waran (borrowed from Arabic) was connected to warnen (to warn), leading him to incorrectly Latinize it as monitor ('warner', 'adviser'). [34]

Austronesian languages spoken across Southeast Asia, where varanids are common, have a large number of slightly related local names for them. They are usually known as biawak ( Malay, including Indonesian standard variety), bayawak ( Filipino), binjawak or minjawak or nyambik ( Javanese), or variations thereof. [35] Other names include hokai ( Solomon Islands); bwo, puo, or soa ( Maluku); halo ( Cebu); galuf or kaluf ( Micronesia and the Caroline Islands); batua or butaan ( Luzon); alu ( Bali); hora or ghora ( Komodo group of islands); phut ( Burmese); and guibang ( Manobo). [36] [37]

In West Africa, the nile monitor is known by several names in Yoruba, including awọ́nríwọ́n, awọ̀n, and àlégbà.

Due to confusion with the large New World lizards of the family Iguanidae, the lizards became known as " goannas" in Australia. Similarly, in South African English, they are referred to as leguaans, or likkewaans, from the Dutch term for the Iguanidae, leguanen.

Some species of monitors can count; studies feeding rock monitors varying numbers of snails showed that they can distinguish numbers up to six. [38] [39] Nile monitors have been observed to cooperate when foraging; one animal lures the female crocodile away from her nest, while the other opens the nest to feed on the eggs. The decoy then returns to also feed on the eggs. [38] [39] Komodo dragons at the National Zoo in Washington, DC, recognize their keepers and seem to have distinct personalities. [39] Two species of tree monitor in British zoos have been observed shredding leaves, apparently as a form of play. [40] 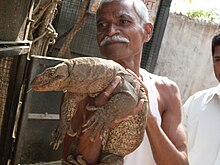 Monitor lizards are poached in some South- and Southeast Asian countries as their organs and fat is used in some traditional medicines, although there is no scientific evidence as to their effectiveness. [41] [42]

Monitor lizard meat, particularly the tongue and liver, is eaten in parts of India and Malaysia, and is supposed to be an aphrodisiac. [43] [44]

In parts of Pakistan and southern India, as well in Northeastern India particularly Assam the different parts of monitor lizards are traditionally used for treating rheumatic pain, skin infections, hemorrhoids, and the oil is used as an aphrodisiac lubricant (sande ka tel). [45]

Consuming raw blood and flesh of monitor lizards has been reported to cause eosinophilic meningoencephalitis, as some monitors are hosts for the parasite Angiostrongylus cantonensis. [43]

"Large-scale exploitation" of monitor lizards is undertaken for their skins, which are described as being "of considerable utility" in the leather industry. [45] In Papua New Guinea, monitor lizard leather is used for membranes in traditional drums (called kundu), and these lizards are referred to as kundu palai or "drum lizard" in Tok Pisin, the main Papuan trade language. Monitor lizard skins are prized in making the resonant part of serjas (Bodo folk sarangis) and dotaras (native strummed string instruments of Assam, Bengal and other eastern states). The leather is also used in making a Carnatic music percussion instrument called the kanjira.

The meat of monitor lizards is eaten by some tribes in India, [46] Nepal, [47] the Philippines, Australia, South Africa and West Africa as a supplemental meat source.[ citation needed] Both meat and eggs are also eaten in Southeast Asian countries such as Vietnam and Thailand as a delicacy. [48]

According to IUCN Red List of threatened species, most of the monitor lizards species fall in the categories of least concern, but the population is decreasing globally. All but five species of monitor lizards are classified by the Convention on International Trade in Endangered Species of Wild Fauna and Flora under Appendix II, which is loosely defined as species that are not necessarily threatened with extinction but may become so unless trade in such species is subject to strict regulation to avoid use incompatible with the survival of the species in the wild. The remaining five species – V. bengalensis, V. flavescens, V. griseus, V. komodoensis, and V. nebulosus – are classified under CITES Appendix I, which outlaws international commercial trade in the species. [49]

The yellow monitor (V. flavescens) is protected in all countries in its range except Bhutan, Nepal, India, Pakistan, and Bangladesh. [50]

In Tamil Nadu and all other parts of South India, catching or killing of monitor lizards is banned under the Protected Species Act.

Species marked with † are extinct 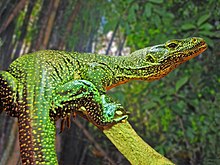 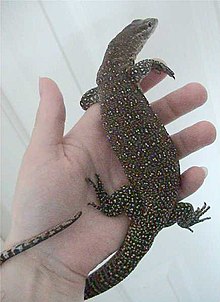 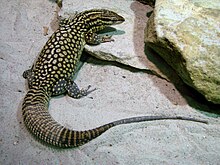 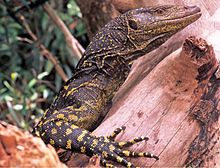 White-throated monitor ( V. a. albigularis) on the Kalahari savannah