From Wikipedia
https://en.wikipedia.org/wiki/Mogilev
City in Mogilev Region, Belarus
This article is about the city in Belarus. For the city in Ukraine, see Mohyliv-Podilskyi.

Mogilev ( Russian: Могилёв, romanized: Mogiljov, [məɡʲɪˈlʲɵf]), Mahilow ( Belarusian: Магілёў, [maɣʲiˈlʲou̯]) or Molev ( Yiddish: מאָלעוו, [mɔˈlɛv]) is a city in eastern Belarus, on the Dnieper River, about 76 kilometres (47 miles) from the border with Russia's Smolensk Oblast and 105 km (65 miles) from the border with Russia's Bryansk Oblast. As of 2011 [update], its population was 360,918, [1] up from an estimated 106,000 in 1956. It is the administrative centre of the Mogilev Region and the third largest city in Belarus. 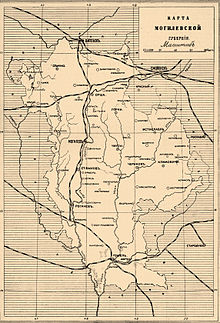 Wehrmacht propaganda photograph of the Jewish women in Mogilev, July 1941. Mogilev Jews were murdered by Police Battalion 322 of Police Regiment Centre in October 1941. [2]

The city was first mentioned in historical records in 1267. From the 14th century, it was part of the Grand Duchy of Lithuania, and since the Union of Lublin (1569), part of the Polish–Lithuanian Commonwealth, where it became known as Mohylew. In the 16th-17th centuries, the city flourished as one of the main nodes of the east–west and north–south trading routes.

In 1577, Polish King Stefan Batory granted it city rights under Magdeburg law. In 1654, the townsmen negotiated a treaty of surrender to the Russians peacefully, if the Jews were to be expelled and their property divided up among Mogilev's inhabitants. Tsar Aleksei Mikhailovitch agreed. However, instead of expelling the Jews, the Russian troops massacred them after they had led them to the outskirts of the town. [3] The city was set afire by Charles XII's forces in 1708, during the Great Northern War. [4] After the First Partition of Poland in 1772, Mogilev became part of the Russian Empire and became the centre of the Mogilev Governorate. In 1938 it was decided Mogilev was to become the capital of Belarus because Minsk was too close to the then-Polish-Soviet border.

In the years 1915–1917, during World War I, the Stavka, the headquarters of the Russian Imperial Army, was based in the city [5] and the Tsar, Nicholas II, spent long periods there as Commander-in-Chief. [6]

Following the Russian Revolution, in 1918, the city was briefly occupied by Germany and placed under their short-lived Belarusian People's Republic. In 1919, Mogilev was captured by the forces of Soviet Russia and incorporated into the Byelorussian SSR. Up to World War II and the Holocaust, like many other cities in Europe, Mogilev had a significant Jewish population: according to the Russian census of 1897, out of the total population of 41,100, 21,500 were Jews (i.e. over 50 percent). [7] In 1938 the leadership of Soviet Belarus decided to move the capital of the country from Minsk to Mogilev. Due to that, the now- Mogilev City Council building was built in 1938–1940 with the aim of being the government building. It was designed to resemble the Minsk Government building.

During Operation Barbarossa, the city was conquered by Wehrmacht forces on 26 July 1941 and remained under German occupation until 28 June 1944. [8] Mogilev became the official residence of High SS and police leader (HSSPF) Erich von dem Bach. During that period, the Jews of Mogilev were ghettoized and systematically murdered by Ordnungspolizei and SS personnel. [9] Heinrich Himmler personally witnessed the executions of 279 Jews on 23 October 1941. Later that month, a number of mentally disabled patients were poisoned with car exhaust fumes as an experiment; the method of killing was thereafter applied in several Nazi extermination camps. Initial plans for establishing a death camp in Mogilev were abandoned in favour of Maly Trostenets.

In 1944, with the Mogilev offensive, the devastated city was liberated by the Red Army and returned to Soviet control. Mogilev then was the site of a labour camp for German POW soldiers.

Since Belarus gained its independence in 1991, Mogilev has remained one of its principal cities.

It remains the see of the Eparchy (Eastern diocese) of Mogilev and Mstsislaw in the Belarusian Exarchate of the Russian Orthodox Church.

After World War II, a huge metallurgy centre with several major steel mills was built. Also, several major factories of cranes, cars, tractors and a chemical plant were established. By the 1950s, tanning was Mogilev's principal industry, and it was a major trading centre for cereal, leather, salt, sugar, fish, timber and flint: the city has been home to a major inland port on the Dnieper river since and an airport since. Since the fall of the Soviet Union and the establishment of Belarus as an independent country, Mogilev has become one of that country's main economic and industrial centres. [10]

The town's most notable landmark is the late 17th-century town hall, named the Ratuša, that was built during the times of the Polish–Lithuanian Commonwealth. The grand tower of the town hall sustained serious damage during the Great Northern War and the Great Patriotic War. It was eventually demolished in 1957 and rebuilt in its pre-war form in 2008.

Another important landmark of Mogilev is the six-pillared St. Stanisław's Cathedral, built in the Baroque style between 1738 and 1752 and distinguished by its frescoes.

The convent of St. Nicholas preserves its magnificent cathedral of 1668, as well as the original iconostasis, bell tower, walls, and gates. It is currently under consideration to become a UNESCO World Heritage site. [11]

Minor landmarks include the archiepiscopal palace and memorial arch, both dating from the 1780s, and the enormous theater in a blend of the Neo-Renaissance and Russian Revival styles.

At Polykovichi, an urban part of Mogilev, there is a 350 metre tall guyed TV mast, one of the tallest structures in Belarus.

City and regional maps of Mogilev