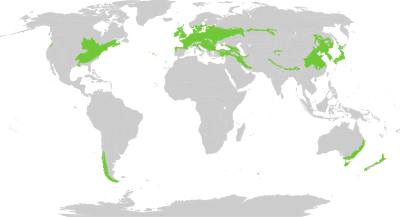 These forests are richest and most distinctive in central China and eastern North America, with some other globally distinctive ecoregions in the Caucasus, the Himalayas, Southern Europe, Australasia, Southwestern South America and the Russian Far East. [1] [2] [3]

The typical structure of these forests includes four layers. [1]

In the Northern hemisphere, characteristic dominant broadleaf trees in this biome include oaks ( Quercus spp.), beeches ( Fagus spp.), maples ( Acer spp.), or birches ( Betula spp.). [1] The term "mixed forest" comes from the inclusion of coniferous trees as a canopy component of some of these forests. Typical coniferous trees include pines ( Pinus spp.), firs ( Abies spp.), and spruces ( Picea spp.). In some areas of this biome, the conifers may be a more important canopy species than the broadleaf species. In the Southern Hemisphere, endemic genera such as Nothofagus and Eucalyptus occupy this biome, and most coniferous trees (members of the Araucariaceae and Podocarpaceae) occur in mixtures with broadleaf species, and are classed as broadleaf and mixed forests.

Temperate broadleaf and mixed forests occur in areas with distinct warm and cool seasons that give them moderate annual average temperatures — 3 to 23 °C (37 to 73 °F). These forests occur in relatively warm and rainy climates, sometimes also with a distinct dry season. A dry season occurs in the winter in East Asia and in summer on the wet fringe of the Mediterranean climate zones. Other areas, such as central eastern North America, have a fairly even distribution of rainfall; annual rainfall is typically over 600 mm (24 in) and often over 1,500 mm (59 in), though it can go as low as 300 mm (12 in) in some parts of the Middle East and close to 6,000 mm (240 in) in the mountains of New Zealand and the Azores. Temperatures are typically moderate except in parts of Asia such as Ussuriland, where temperate forests can occur despite very harsh conditions with very cold winters.

The climates are typically humid for much of the year, usually appearing in the humid subtropical climate without summer being extremely hot and winter very mild, and in the humid continental climate zones to the south of tundra and the generally subarctic taiga. In the Köppen climate classification they are represented respectively by Cfa, Dfa/Dfb southern range and Cfb, [4] [5] and more rarely, Csb, BSk and Csa.