From Wikipedia
(Redirected from Minimal surfaces)
https://en.wikipedia.org/wiki/Minimal_surfaces
Surface that locally minimizes its area
Not to be confused with minimal rational surface or minimal algebraic surface.

In mathematics, a minimal surface is a surface that locally minimizes its area. This is equivalent to having zero mean curvature (see definitions below). 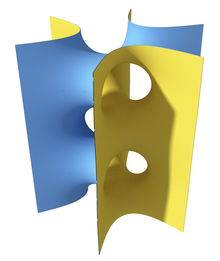 Saddle tower minimal surface. While any small change of the surface increases its area, there exist other surfaces with the same boundary with a smaller total area.

Minimal surfaces can be defined in several equivalent ways in R3. The fact that they are equivalent serves to demonstrate how minimal surface theory lies at the crossroads of several mathematical disciplines, especially differential geometry, calculus of variations, potential theory, complex analysis and mathematical physics. [1]

Local least area definition: A surface M ⊂ R3 is minimal if and only if every point p ∈ M has a neighbourhood, bounded by a simple closed curve, which has the least area among all surfaces having the same boundary.

This property is local: there might exist regions in a minimal surface, together with other surfaces of smaller area which have the same boundary. This property establishes a connection with soap films; a soap film deformed to have a wire frame as boundary will minimize area.

Variational definition: A surface M ⊂ R3 is minimal if and only if it is a critical point of the area functional for all compactly supported variations.

This definition makes minimal surfaces a 2-dimensional analogue to geodesics, which are analogously defined as critical points of the length functional. 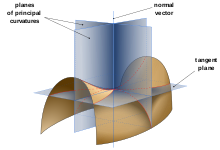 Mean curvature definition: A surface M ⊂ R3 is minimal if and only if its mean curvature is equal to zero at all points.

A direct implication of this definition is that every point on the surface is a saddle point with equal and opposite principal curvatures. Additionally, this makes minimal surfaces into the static solutions of mean curvature flow. By the Young–Laplace equation, the mean curvature of a soap film is proportional to the difference in pressure between the sides. If the soap film does not enclose a region, then this will make its mean curvature zero. By contrast, a spherical soap bubble encloses a region which has a different pressure from the exterior region, and as such does not have zero mean curvature.

Differential equation definition: A surface M ⊂ R3 is minimal if and only if it can be locally expressed as the graph of a solution of

The partial differential equation in this definition was originally found in 1762 by Lagrange, [2] and Jean Baptiste Meusnier discovered in 1776 that it implied a vanishing mean curvature. [3]

Energy definition: A conformal immersion X: M → R3 is minimal if and only if it is a critical point of the Dirichlet energy for all compactly supported variations, or equivalently if any point p ∈ M has a neighbourhood with least energy relative to its boundary.

Harmonic definition: If X = (x1, x2, x3): M → R3 is an isometric immersion of a Riemann surface into 3-space, then X is said to be minimal whenever xi is a harmonic function on M for each i.

A direct implication of this definition and the maximum principle for harmonic functions is that there are no compact complete minimal surfaces in R3.

Gauss map definition: A surface M ⊂ R3 is minimal if and only if its stereographically projected Gauss map g: M → C ∪ {∞} is meromorphic with respect to the underlying Riemann surface structure, and M is not a piece of a sphere.

This definition uses that the mean curvature is half of the trace of the shape operator, which is linked to the derivatives of the Gauss map. If the projected Gauss map obeys the Cauchy–Riemann equations then either the trace vanishes or every point of M is umbilic, in which case it is a piece of a sphere.

Minimal surface theory originates with Lagrange who in 1762 considered the variational problem of finding the surface z = z(x, y) of least area stretched across a given closed contour. He derived the Euler–Lagrange equation for the solution

He did not succeed in finding any solution beyond the plane. In 1776 Jean Baptiste Marie Meusnier discovered that the helicoid and catenoid satisfy the equation and that the differential expression corresponds to twice the mean curvature of the surface, concluding that surfaces with zero mean curvature are area-minimizing.

By expanding Lagrange's equation to

Gaspard Monge and Legendre in 1795 derived representation formulas for the solution surfaces. While these were successfully used by Heinrich Scherk in 1830 to derive his surfaces, they were generally regarded as practically unusable. Catalan proved in 1842/43 that the helicoid is the only ruled minimal surface.

Progress had been fairly slow until the middle of the century when the Björling problem was solved using complex methods. The "first golden age" of minimal surfaces began. Schwarz found the solution of the Plateau problem for a regular quadrilateral in 1865 and for a general quadrilateral in 1867 (allowing the construction of his periodic surface families) using complex methods. Weierstrass and Enneper developed more useful representation formulas, firmly linking minimal surfaces to complex analysis and harmonic functions. Other important contributions came from Beltrami, Bonnet, Darboux, Lie, Riemann, Serret and Weingarten.

Another revival began in the 1980s. One cause was the discovery in 1982 by Celso Costa of a surface that disproved the conjecture that the plane, the catenoid, and the helicoid are the only complete embedded minimal surfaces in R3 of finite topological type. This not only stimulated new work on using the old parametric methods, but also demonstrated the importance of computer graphics to visualise the studied surfaces and numerical methods to solve the "period problem" (when using the conjugate surface method to determine surface patches that can be assembled into a larger symmetric surface, certain parameters need to be numerically matched to produce an embedded surface). Another cause was the verification by H. Karcher that the triply periodic minimal surfaces originally described empirically by Alan Schoen in 1970 actually exist. This has led to a rich menagerie of surface families and methods of deriving new surfaces from old, for example by adding handles or distorting them.

Classical examples of minimal surfaces include:

Surfaces from the 19th century golden age include:

Generalisations and links to other fields

Minimal surfaces can be defined in other manifolds than R3, such as hyperbolic space, higher-dimensional spaces or Riemannian manifolds.

The definition of minimal surfaces can be generalized/extended to cover constant-mean-curvature surfaces: surfaces with a constant mean curvature, which need not equal zero.

In discrete differential geometry discrete minimal surfaces are studied: simplicial complexes of triangles that minimize their area under small perturbations of their vertex positions. [4] Such discretizations are often used to approximate minimal surfaces numerically, even if no closed form expressions are known.

Minimal surfaces have become an area of intense scientific study, especially in the areas of molecular engineering and materials science, due to their anticipated applications in self-assembly of complex materials.[ citation needed] The endoplasmic reticulum, an important structure in cell biology, is proposed to be under evolutionary pressure to conform to a nontrivial minimal surface. [6]

In the fields of general relativity and Lorentzian geometry, certain extensions and modifications of the notion of minimal surface, known as apparent horizons, are significant. [7] In contrast to the event horizon, they represent a curvature-based approach to understanding black hole boundaries. 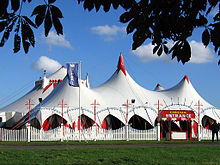 Structures with minimal surfaces can be used as tents.

Minimal surfaces are part of the generative design toolbox used by modern designers. In architecture there has been much interest in tensile structures, which are closely related to minimal surfaces. A famous example is the Olympiapark in Münich by Frei Otto, inspired by soap surfaces.