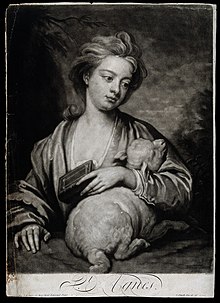 Saint Agnes, mezzotint by John Smith after Godfrey Kneller, usually thought to be a portrait of his daughter, Catherine Voss, by his mistress. [1]

Mezzotint is a monochrome printmaking process of the intaglio family. [2] It was the first printing process that yielded half-tones without using line- or dot-based techniques like hatching, cross-hatching or stipple. Mezzotint achieves tonality by roughening a metal plate with thousands of little dots made by a metal tool with small teeth, called a "rocker". In printing, the tiny pits in the plate retain the ink when the face of the plate is wiped clean. This technique can achieve a high level of quality and richness in the print.

Mezzotint is often combined with other intaglio techniques, usually etching and engraving. The process was especially widely used in England from the eighteenth century, to reproduce portraits and other paintings. It was somewhat in competition with the other main tonal technique of the day, aquatint. Since the mid-nineteenth century it has been relatively little used, as lithography and other techniques produced comparable results more easily. Interest in learning and using the technique grew exponentially in 1990 upon the publication of the book The Mezzotint: History and Technique by artist Carol Wax. The Wax book was responsible for a substantial upsurge in the number of artists creating mezzotints in the United States and worldwide. Sir Frank Short (1857–1945) was an important pioneer of the mezzotint revival in the United Kingdom along with Peter Ilsted (1864–1933) in Denmark. Today's practitioners of the mezzotint process include Craig McPherson (b. 1948), Frederick Mershimer (b. 1958) and Carol Wax (b. 1953). The Wax book is in the process of a revised edition due for publication late in 2022. 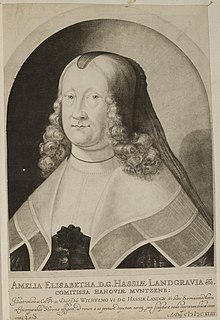 The mezzotint printmaking method was invented by the German amateur artist Ludwig von Siegen (1609– c. 1680). His earliest mezzotint print dates to 1642 and is a portrait of Countess Amalie Elisabeth of Hanau-Münzenberg. This was made by working from light to dark. The rocker seems to have been invented by Prince Rupert of the Rhine, a famous cavalry commander in the English Civil War, who was the next to use the process, and took it to England. Sir Peter Lely saw the potential for using it to publicise his portraits, and encouraged a number of Dutch printmakers to come to England. Godfrey Kneller worked closely with John Smith, who is said to have lived in his house for a period; he created about 500 mezzotints, some 300 copies of portrait paintings.

British mezzotint collecting was a great craze from about 1760 to the Great Crash of 1929, also spreading to America. The main area of collecting was British portraits; hit oil paintings from the Royal Academy Summer Exhibition were routinely, and profitably, reproduced in mezzotint throughout this period, and other mezzotinters reproduced older portraits of historical figures, or if necessary, made them up. The favourite period to collect was roughly from 1750 to 1820, the great period of the British portrait. There were two basic styles of collection: some concentrated on making a complete collection of material within a certain scope, while others aimed at perfect condition and quality (which declines in mezzotints after a relatively small number of impressions are taken from a plate), and in collecting the many " proof states" which artists and printers had obligingly provided for them from early on. Leading collectors included William Eaton, 2nd Baron Cheylesmore and the Irishman John Chaloner Smith. [3]

The first mezzotints by Ludwig von Siegen were made using the light to dark method. The metal plate was tooled to create indentations and parts of the image that were to stay light in tone were kept smooth. This method was referred to as the ‘Additive method’; that is, adding areas of indentations to the plate for the areas of the print that were to appear darker in tone. This technique meant that it was possible to create the image directly by only roughening a blank plate selectively, where the darker parts of the image are to be. By varying the degree of smoothing, mid-tones between black and white can be created, hence the name mezzo-tinto which is Italian for " half-tone" or "half-painted".

This became the most common method. The whole surface (usually) of a metal, usually copper, plate is roughened evenly, manually with a rocker, or mechanically. If the plate were printed at this point it would show as solid black. The image is then created by selectively burnishing areas of the surface of the metal plate with metal tools; the smoothed parts will print lighter than those areas not smoothed by the burnishing tool. Areas smoothed completely flat will not hold ink at all; such areas will print "white," that is, the color of the paper without ink. This is called working from "dark to light", or the "subtractive" method.

Printing the finished plate is the same for either method, and follows the normal way for an intaglio plate; the whole surface is inked, the ink is then wiped off the surface to leave ink only in the pits of the still rough areas below the original surface of the plate. The plate is put through a high-pressure printing press next to a sheet of paper, and the process repeated.

Because the pits in the plate are not deep, only a small number of top-quality impressions (copies) can be printed before the quality of the tone starts to degrade as the pressure of the press begins to smooth them out. Perhaps only one or two hundred really good impressions can be taken.[ citation needed]

Plates can be mechanically roughened; one way is to rub fine metal filings over the surface with a piece of glass; the finer the filings, the smaller the grain of the surface. Special roughening tools called 'rockers' have been in use since at least the eighteenth century. The method commonly in use today is to use a steel rocker approximately five inches wide, which has between 45 and 120 teeth per inch on the face of a blade in the shape of a shallow arc, with a wooden handle projecting upwards in a T-shape. Rocked steadily from side to side at the correct angle, the rocker will proceed forward creating burrs in the surface of the copper. The plate is then moved – either rotated by a set number of degrees or through 90 degrees according to preference – and then rocked in another pass. This is repeated until the plate is roughened evenly and will print a completely solid tone of black.

Mezzotint is known for the luxurious quality of its tones: first, because an evenly, finely roughened surface holds a lot of ink, allowing deep solid colors to be printed; secondly because the process of smoothing the plate with burin, burnisher and scraper allows fine gradations in tone to be developed. The scraper is a triangular ended tool, and the burnisher has a smooth round end – not unlike many spoon handles.