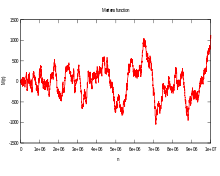 In number theory, the Mertens function is defined for all positive integers n as

is the Möbius function. The function is named in honour of Franz Mertens. This definition can be extended to positive real numbers as follows:

The Mertens function slowly grows in positive and negative directions both on average and in peak value, oscillating in an apparently chaotic manner passing through zero when n has the values

Because the Möbius function only takes the values −1, 0, and +1, the Mertens function moves slowly, and there is no x such that |M(x)| > x. The Mertens conjecture went further, stating that there would be no x where the absolute value of the Mertens function exceeds the square root of x. The Mertens conjecture was proven false in 1985 by Andrew Odlyzko and Herman te Riele. However, the Riemann hypothesis is equivalent to a weaker conjecture on the growth of M(x), namely M(x) = O(x1/2 + ε). Since high values for M(x) grow at least as fast as

, this puts a rather tight bound on its rate of growth. Here, O refers to big O notation.

The true rate of growth of M(x) is not known. An unpublished conjecture of Steve Gonek states that

Probabilistic evidence towards this conjecture is given by Nathan Ng. [1] In particular, Ng gives a conditional proof that the function

has a limiting distribution

. That is, for all bounded Lipschitz continuous functions

on the reals we have that

Using the Euler product, one finds that

is the Riemann zeta function, and the product is taken over primes. Then, using this Dirichlet series with Perron's formula, one obtains

Conversely, one has the Mellin transform

Assuming that the Riemann zeta function has no multiple non-trivial zeros, one has the "exact formula" by the residue theorem:

where H(x) is the Heaviside step function, B are Bernoulli numbers, and all derivatives with respect to t are evaluated at t = 0.

where the first sum on the right-hand side is taken over the non-trivial zeros of the Riemann zeta function, and (g, h) are related by the Fourier transform, such that

As a sum over Farey sequences

Another formula for the Mertens function is

is the Farey sequence of order n.

This formula is used in the proof of the Franel–Landau theorem. [2]

This formulation[ citation needed] expanding the Mertens function suggests asymptotic bounds obtained by considering the Piltz divisor problem, which generalizes the Dirichlet divisor problem of computing asymptotic estimates for the summatory function of the divisor function.

The Mertens function for all integer values up to x may be computed in O(x log log x) time. Combinatorial algorithms can compute isolated values of M(x) in O(x2/3(log log x)1/3) time, and faster non-combinatorial methods are also known. [5]

Ng notes that the Riemann hypothesis (RH) is equivalent to

for some positive constant

. Other upper bounds have been obtained by Maier, Montgomery, and Soundarajan assuming the RH including

Other explicit upper bounds are given by Kotnik as