From Wikipedia
https://en.wikipedia.org/wiki/Melody
Linear succession of musical tones in the foreground of a work of music
This article is about melody in music. For other senses of this word, see Melody (disambiguation).
"Melodic" redirects here. For other uses, see Melodic (disambiguation).
"Foreground (music)" redirects here. For more specific musical uses, see Structural level. 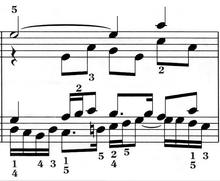 A bar from J. S. Bach's Fugue No. 17 in A-flat, BWV 862, from The Well-Tempered Clavier (Part I), an example of counterpoint. The two voices (melodies) on each staff can be distinguished by the direction of the stems and beams.
Voice 1
Voice 2
Voice 3
Voice 4

A melody (from Greek μελῳδία, melōidía, "singing, chanting"), [1] also tune, voice or line, is a linear succession of musical tones that the listener perceives as a single entity. In its most literal sense, a melody is a combination of pitch and rhythm, while more figuratively, the term can include other musical elements such as tonal color. It is the foreground to the background accompaniment. A line or part need not be a foreground melody.

Melodies often consist of one or more musical phrases or motifs, and are usually repeated throughout a composition in various forms. Melodies may also be described by their melodic motion or the pitches or the intervals between pitches (predominantly conjunct or disjunct or with further restrictions), pitch range, tension and release, continuity and coherence, cadence, and shape.

The true goal of music—its proper enterprise—is melody. All the parts of harmony have as their ultimate purpose only beautiful melody. Therefore, the question of which is the more significant, melody or harmony, is futile. Beyond doubt, the means is subordinate to the end.

Melody is to music what a scent is to the senses: it jogs our memory. It gives face to form, and identity and character to the process and proceedings. It is not only a musical subject, but a manifestation of the musically subjective. It carries and radiates personality with as much clarity and poignancy as harmony and rhythm combined. As such a powerful tool of communication, melody serves not only as protagonist in its own drama, but as messenger from the author to the audience.

Given the many and varied elements and styles of melody "many extant explanations [of melody] confine us to specific stylistic models, and they are too exclusive." [4] Paul Narveson claimed in 1984 that more than three-quarters of melodic topics had not been explored thoroughly. [5]

The melodies existing in most European music written before the 20th century, and popular music throughout the 20th century, featured "fixed and easily discernible frequency patterns", recurring "events, often periodic, at all structural levels" and "recurrence of durations and patterns of durations". [4]

Melodies in the 20th century "utilized a greater variety of pitch resources than ha[d] been the custom in any other historical period of Western music." While the diatonic scale was still used, the chromatic scale became "widely employed." [4] Composers also allotted a structural role to "the qualitative dimensions" that previously had been "almost exclusively reserved for pitch and rhythm". Kliewer states, "The essential elements of any melody are duration, pitch, and quality ( timbre), texture, and loudness. [4] Though the same melody may be recognizable when played with a wide variety of timbres and dynamics, the latter may still be an "element of linear ordering." [4]

Different musical styles use melody in different ways. For example: