From Wikipedia
https://en.wikipedia.org/wiki/Median_(geometry)
Not to be confused with Geometric median. 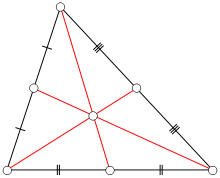 The triangle medians and the centroid.

In geometry, a median of a triangle is a line segment joining a vertex to the midpoint of the opposite side, thus bisecting that side. Every triangle has exactly three medians, one from each vertex, and they all intersect each other at the triangle's centroid. In the case of isosceles and equilateral triangles, a median bisects any angle at a vertex whose two adjacent sides are equal in length.

The concept of a median extends to tetrahedra.

Relation to center of mass

Each median of a triangle passes through the triangle's centroid, which is the center of mass of an infinitely thin object of uniform density coinciding with the triangle. [1] Thus the object would balance on the intersection point of the medians. The centroid is twice as close along any median to the side that the median intersects as it is to the vertex it emanates from. 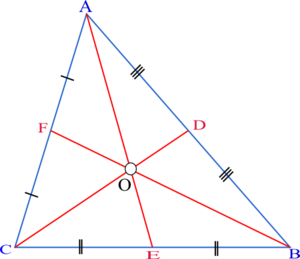 Consider a triangle ABC. Let D be the midpoint of

, E be the midpoint of

, F be the midpoint of

, and O be the centroid (most commonly denoted G).

represents the area of triangle

; these hold because in each case the two triangles have bases of equal length and share a common altitude from the (extended) base, and a triangle's area equals one-half its base times its height.

. Using the same method, one can show that

The medians of any triangle dissect it into six equal area smaller triangles as in the figure above where three adjacent pairs of triangles meet at the midpoints D, E and F. If the two triangles in each such pair are rotated about their common midpoint until they meet so as to share a common side, then the three new triangles formed by the union of each pair are congruent.

The lengths of the medians can be obtained from Apollonius' theorem as:

where a, b and c are the sides of the triangle with respective medians ma, mb, and mc from their midpoints.

Thus we have the relationships: [5]

Let ABC be a triangle, let G be its centroid, and let D, E, and F be the midpoints of BC, CA, and AB, respectively. For any point P in the plane of ABC then

The centroid divides each median into parts in the ratio 2:1, with the centroid being twice as close to the midpoint of a side as it is to the opposite vertex.

For any triangle with sides

The medians of a right triangle with hypotenuse c satisfy 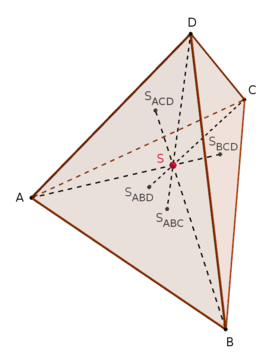 medians of a tetrahedron