The MayerÔÇôVietoris sequence holds for a variety of cohomology and homology theories, including simplicial homology and singular cohomology. In general, the sequence holds for those theories satisfying the EilenbergÔÇôSteenrod axioms, and it has variations for both reduced and relative (co)homology. Because the (co)homology of most spaces cannot be computed directly from their definitions, one uses tools such as the MayerÔÇôVietoris sequence in the hope of obtaining partial information. Many spaces encountered in topology are constructed by piecing together very simple patches. Carefully choosing the two covering subspaces so that, together with their intersection, they have simpler (co)homology than that of the whole space may allow a complete deduction of the (co)homology of the space. In that respect, the MayerÔÇôVietoris sequence is analogous to the SeifertÔÇôvan Kampen theorem for the fundamental group, and a precise relation exists for homology of dimension one.

Leopold Vietoris on his 110th birthday

The most natural and convenient way to express the relation involves the algebraic concept of exact sequences: sequences of objects (in this case groups) and morphisms (in this case group homomorphisms) between them such that the image of one morphism equals the kernel of the next. In general, this does not allow (co)homology groups of a space to be completely computed. However, because many important spaces encountered in topology are topological manifolds, simplicial complexes, or CW complexes, which are constructed by piecing together very simple patches, a theorem such as that of Mayer and Vietoris is potentially of broad and deep applicability.

Mayer was introduced to topology by his colleague Vietoris when attending his lectures in 1926 and 1927 at a local university in Vienna. [1] He was told about the conjectured result and a way to its solution, and solved the question for the Betti numbers in 1929. [2] He applied his results to the torus considered as the union of two cylinders. [3] [4] Vietoris later proved the full result for the homology groups in 1930 but did not express it as an exact sequence. [5] The concept of an exact sequence only appeared in print in the 1952 book Foundations of Algebraic Topology by Samuel Eilenberg and Norman Steenrod [6] where the results of Mayer and Vietoris were expressed in the modern form. [7]

Let X be a topological space and A, B be two subspaces whose interiors cover X. (The interiors of A and B need not be disjoint.) The MayerÔÇôVietoris sequence in singular homology for the triad (X, A, B) is a long exact sequence relating the singular homology groups (with coefficient group the integers Z) of the spaces X, A, B, and the intersection AÔłęB. [8] There is an unreduced and a reduced version.

For unreduced homology, the MayerÔÇôVietoris sequence states that the following sequence is exact: [9] 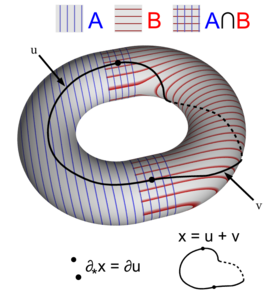 Illustration of the boundary map Ôłé∗ on the torus where the 1-cycle x = u + v is the sum of two 1-chains whose boundary lies in the intersection of A and B.

The boundary maps Ôłé∗ lowering the dimension may be defined as follows. [10] An element in Hn(X) is the homology class of an n-cycle x which, by barycentric subdivision for example, can be written as the sum of two n-chains u and v whose images lie wholly in A and B, respectively. Thus Ôłéx = Ôłé(u + v) = 0 so that Ôłéu = ÔłĺÔłév. This implies that the images of both these boundary (n Ôłĺ 1)-cycles are contained in the intersection AÔłęB. Then Ôłé∗([x]) can be defined to be the class of Ôłéu in Hn−1(AÔłęB). Choosing another decomposition x = uÔÇ▓ + vÔÇ▓ does not affect [Ôłéu], since Ôłéu + Ôłév = Ôłéx = ÔłéuÔÇ▓ + ÔłévÔÇ▓, which implies Ôłéu − ÔłéuÔÇ▓ = Ôłé(vÔÇ▓ − v), and therefore Ôłéu and ÔłéuÔÇ▓ lie in the same homology class; nor does choosing a different representative xÔÇ▓, since then ÔłéxÔÇ▓ = Ôłéx = 0. Notice that the maps in the MayerÔÇôVietoris sequence depend on choosing an order for A and B. In particular, the boundary map changes sign if A and B are swapped.

For reduced homology there is also a MayerÔÇôVietoris sequence, under the assumption that A and B have non-empty intersection. [11] The sequence is identical for positive dimensions and ends as:

Analogy with the SeifertÔÇôvan Kampen theorem

There is an analogy between the MayerÔÇôVietoris sequence (especially for homology groups of dimension 1) and the SeifertÔÇôvan Kampen theorem. [10] [12] Whenever

is path-connected, the reduced MayerÔÇôVietoris sequence yields the isomorphism

This is precisely the abelianized statement of the SeifertÔÇôvan Kampen theorem. Compare with the fact that

is the abelianization of the fundamental group 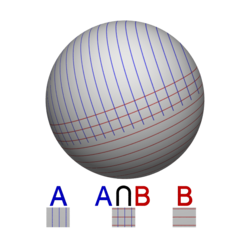 The decomposition for X = S2

To completely compute the homology of the k-sphere X = Sk, let A and B be two hemispheres of X with intersection homotopy equivalent to a (k − 1)-dimensional equatorial sphere. Since the k-dimensional hemispheres are homeomorphic to k-discs, which are contractible, the homology groups for A and B are trivial. The MayerÔÇôVietoris sequence for reduced homology groups then yields

Exactness immediately implies that the map Ôłé* is an isomorphism. Using the reduced homology of the 0-sphere (two points) as a base case, it follows [14]

where ╬┤ is the Kronecker delta. Such a complete understanding of the homology groups for spheres is in stark contrast with current knowledge of homotopy groups of spheres, especially for the case n > k about which little is known. [15] 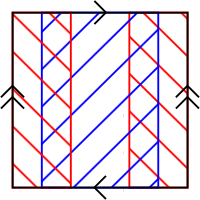 The Klein bottle ( fundamental polygon with appropriate edge identifications) decomposed as two M├Âbius strips A (in blue) and B (in red).

A slightly more difficult application of the MayerÔÇôVietoris sequence is the calculation of the homology groups of the Klein bottle X. One uses the decomposition of X as the union of two M├Âbius strips A and B glued along their boundary circle (see illustration on the right). Then A, B and their intersection AÔłęB are homotopy equivalent to circles, so the nontrivial part of the sequence yields [16]

and the trivial part implies vanishing homology for dimensions greater than 2. The central map ╬▒ sends 1 to (2, −2) since the boundary circle of a M├Âbius band wraps twice around the core circle. In particular ╬▒ is injective so homology of dimension 2 also vanishes. Finally, choosing (1, 0) and (1, −1) as a basis for Z2, it follows

This decomposition of the wedge sum X of two 2-spheres K and L yields all the homology groups of X.

Let X be the wedge sum of two spaces K and L, and suppose furthermore that the identified basepoint is a deformation retract of open neighborhoods U ÔŐć K and V ÔŐć L. Letting A = K Ôł¬ V and B = U Ôł¬ L it follows that A Ôł¬ B = X and A Ôłę B = U Ôł¬ V, which is contractible by construction. The reduced version of the sequence then yields (by exactness) [17]

for all dimensions n. The illustration on the right shows X as the sum of two 2-spheres K and L. For this specific case, using the result from above for 2-spheres, one has

This decomposition of the suspension X of the 0-sphere Y yields all the homology groups of X.

If X is the suspension SY of a space Y, let A and B be the complements in X of the top and bottom 'vertices' of the double cone, respectively. Then X is the union AÔł¬B, with A and B contractible. Also, the intersection AÔłęB is homotopy equivalent to Y. Hence the MayerÔÇôVietoris sequence yields, for all n, [18]

A relative form of the MayerÔÇôVietoris sequence also exists. If Y ÔŐé X and is the union of C ÔŐé A and D ÔŐé B, then the exact sequence is: [19]

The homology groups are natural in the sense that if

is a continuous map, then there is a canonical pushforward map of homology groups

The MayerÔÇôVietoris sequence is also natural in the sense that if

then the connecting morphism of the MayerÔÇôVietoris sequence,

The MayerÔÇôVietoris long exact sequence for singular cohomology groups with coefficient group G is dual to the homological version. It is the following: [22]

where the dimension preserving maps are restriction maps induced from inclusions, and the (co-)boundary maps are defined in a similar fashion to the homological version. There is also a relative formulation.

As an important special case when G is the group of real numbers R and the underlying topological space has the additional structure of a smooth manifold, the MayerÔÇôVietoris sequence for de Rham cohomology is

where {U, V} is an open cover of X, ¤ü denotes the restriction map, and ╬ö is the difference. The map

is defined similarly as the map

from above. It can be briefly described as follows. For a cohomology class [¤ë] represented by closed form ¤ë in UÔłęV, express ¤ë as a difference of forms

via a partition of unity subordinate to the open cover {U, V}, for example. The exterior derivative d¤ëU and d¤ëV agree on UÔłęV and therefore together define an n + 1 form ¤â on X. One then has d∗([¤ë]) = [¤â].

For de Rham cohomology with compact supports, there exists a "flipped" version of the above sequence:

is the signed inclusion map

extends a form with compact support to a form on

where ╬▒(x) = (x, Ôłĺx), ╬▓(x, y) = x + y, and Cn(A + B) is the chain group consisting of sums of chains in A and chains in B. [9] It is a fact that the singular n-simplices of X whose images are contained in either A or B generate all of the homology group Hn(X). [24] In other words, Hn(A + B) is isomorphic to Hn(X). This gives the MayerÔÇôVietoris sequence for singular homology.

From a formal point of view, the MayerÔÇôVietoris sequence can be derived from the EilenbergÔÇôSteenrod axioms for homology theories using the long exact sequence in homology. [26]