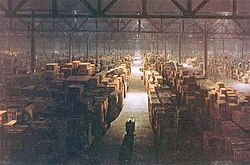 The government warehouse in Raiders of the Lost Ark (1981) was painted on glass by Michael Pangrazio at Industrial Light & Magic, and combined with live-action footage of a government worker, pushing his cargo up the center aisle.

A matte painting is a painted representation of a landscape, set, or distant location that allows filmmakers to create the illusion of an environment that is not present at the filming location. Historically, matte painters and film technicians have used various techniques to combine a matte-painted image with live-action footage ( compositing). At its best, depending on the skill levels of the artists and technicians, the effect is "seamless" and creates environments that would otherwise be impossible or expensive to film. In the scenes, the painting part is static while movements are integrated on it.

Traditionally, matte paintings were made by artists using paints or pastels on large sheets of glass for integrating with the live-action footage. [1] The first known matte painting shot was made in 1907 by Norman Dawn (ASC), who improvised the crumbling California Missions by painting them on glass for the movie Missions of California. [2] Notable traditional matte-painting shots include Dorothy's approach to the Emerald City in The Wizard of Oz, Charles Foster Kane's Xanadu in Citizen Kane, and the seemingly bottomless tractor-beam set of Star Wars Episode IV: A New Hope. The documentary The Making of Star Wars mentioned the technique used for the tractor beam scene as being a glass painting. [3]

By the mid-1980s, advancements in computer graphics programs allowed matte painters to work in the digital realm. The first digital matte shot was created by painter Chris Evans in 1985 for Young Sherlock Holmes for a scene featuring a computer-graphics (CG) animation of a knight leaping from a stained-glass window. Evans first painted the window in acrylics, then scanned the painting into LucasFilm's Pixar system for further digital manipulation. The computer animation (another first) blended perfectly with the digital matte, which could not have been accomplished using a traditional matte painting. [4]

Throughout the 1990s, traditional matte paintings were still in use, but more often in conjunction with digital compositing. Die Hard 2 (1990) was the first film to use digitally composited live-action footage with a traditional glass matte painting that had been photographed and scanned into a computer. It was for the last scene, which took place on an airport runway. [5] By the end of the decade, the time of hand-painted matte paintings was drawing to a close, although as late as 1997 some traditional paintings were still being made, notably Chris Evans’ painting of the RMS Carpathia rescue ship in James Cameron’s Titanic. [6]