From Wikipedia
https://en.wikipedia.org/wiki/Mathematics_and_fiber_arts
Ideas from Mathematics have been used as inspiration for fiber arts 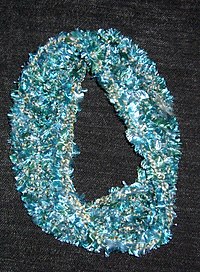 A Möbius strip scarf made from crochet.

Ideas from mathematics have been used as inspiration for fiber arts including quilt making, knitting, cross-stitch, crochet, embroidery and weaving. A wide range of mathematical concepts have been used as inspiration including topology, graph theory, number theory and algebra. Some techniques such as counted-thread embroidery are naturally geometrical; other kinds of textile provide a ready means for the colorful physical expression of mathematical concepts.

The IEEE Spectrum has organized a number of competitions on quilt block design, and several books have been published on the subject. Notable quiltmakers include Diana Venters and Elaine Ellison, who have written a book on the subject Mathematical Quilts: No Sewing Required. Examples of mathematical ideas used in the book as the basis of a quilt include the golden rectangle, conic sections, Leonardo da Vinci's Claw, the Koch curve, the Clifford torus, San Gaku, Mascheroni's cardioid, Pythagorean triples, spidrons, and the six trigonometric functions. [1] 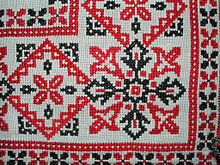 Knitted mathematical objects include the Platonic solids, Klein bottles and Boy's surface. The Lorenz manifold and the hyperbolic plane have been crafted using crochet. [2] [3] Knitted and crocheted tori have also been constructed depicting toroidal embeddings of the complete graph K7 and of the Heawood graph. [4] The crocheting of hyperbolic planes has been popularized by the Institute For Figuring; a book by Daina Taimina on the subject, Crocheting Adventures with Hyperbolic Planes, won the 2009 Bookseller/Diagram Prize for Oddest Title of the Year. [5] 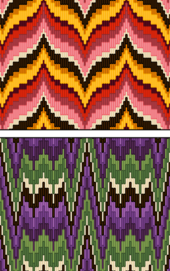 Embroidery techniques such as counted-thread embroidery [6] including cross-stitch and some canvas work methods such as Bargello make use of the natural pixels of the weave, lending themselves to geometric designs. [7] [8]

Ada Dietz (1882 – 1950) was an American weaver best known for her 1949 monograph Algebraic Expressions in Handwoven Textiles, which defines weaving patterns based on the expansion of multivariate polynomials. [9]

Margaret Greig was a mathematician who articulated the mathematics of worsted spinning. [11]

The silk scarves from DMCK Designs' 2013 collection are all based on Douglas McKenna's space-filling curve patterns. [12] The designs are either generalized Peano curves, or based on a new space-filling construction technique. [13] [14]

The Issey Miyake Fall-Winter 2010–2011 ready-to-wear collection designs from a collaboration between fashion designer Dai Fujiwara and mathematician William Thurston. The designs were inspired by Thurston's geometrization conjecture, the statement that every 3-manifold can be decomposed into pieces with one of eight different uniform geometries, a proof of which had been sketched in 2003 by Grigori Perelman as part of his proof of the Poincaré conjecture. [15]