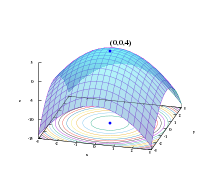 Nelder-Mead minimum search of Simionescu's function. Simplex vertices are ordered by their values, with 1 having the lowest (fx best) value.

Mathematical optimization (alternatively spelled optimisation) or mathematical programming is the selection of a best element, with regard to some criterion, from some set of available alternatives. [1] It is generally divided into two subfields: discrete optimization and continuous optimization. Optimization problems of sorts arise in all quantitative disciplines from computer science and engineering [2] to operations research and economics, and the development of solution methods has been of interest in mathematics for centuries. [3]

In the more general approach, an optimization problem consists of maximizing or minimizing a real function by systematically choosing input values from within an allowed set and computing the value of the function. The generalization of optimization theory and techniques to other formulations constitutes a large area of applied mathematics. More generally, optimization includes finding "best available" values of some objective function given a defined domain (or input), including a variety of different types of objective functions and different types of domains.

Optimization problems can be divided into two categories, depending on whether the variables are continuous or discrete:

An optimization problem can be represented in the following way:

Such a formulation is called an optimization problem or a mathematical programming problem (a term not directly related to computer programming, but still in use for example in linear programming – see History below). Many real-world and theoretical problems may be modeled in this general framework.

Since the following is valid

Problems formulated using this technique in the fields of physics may refer to the technique as energy minimization, speaking of the value of the function f as representing the energy of the system being modeled. In machine learning, it is always necessary to continuously evaluate the quality of a data model by using a cost function where a minimum implies a set of possibly optimal parameters with an optimal (lowest) error.

Typically, A is some subset of the Euclidean space ℝn, often specified by a set of constraints, equalities or inequalities that the members of A have to satisfy. The domain A of f is called the search space or the choice set, while the elements of A are called candidate solutions or feasible solutions.

In mathematics, conventional optimization problems are usually stated in terms of minimization.

that is to say, on some region around x* all of the function values are greater than or equal to the value at that element. Local maxima are defined similarly.

A large number of algorithms proposed for solving the nonconvex problems – including the majority of commercially available solvers – are not capable of making a distinction between locally optimal solutions and globally optimal solutions, and will treat the former as actual solutions to the original problem. Global optimization is the branch of applied mathematics and numerical analysis that is concerned with the development of deterministic algorithms that are capable of guaranteeing convergence in finite time to the actual optimal solution of a nonconvex problem.

Optimization problems are often expressed with special notation. Here are some examples:

Minimum and maximum value of a function

This denotes the minimum value of the objective function x2 + 1, when choosing x from the set of real numbers ℝ. The minimum value in this case is 1, occurring at x = 0.

This represents the value (or values) of the argument x in the interval (−∞,−1] that minimizes (or minimises) the objective function x2 + 1 (the actual minimum value of that function is not what the problem asks for). In this case, the answer is x = −1, since x = 0 is infeasible, that is, it does not belong to the feasible set.

represents the {x, y} pair (or pairs) that maximizes (or maximize) the value of the objective function x cos y, with the added constraint that x lie in the interval [−5,5] (again, the actual maximum value of the expression does not matter). In this case, the solutions are the pairs of the form {5, 2kπ} and {−5, (2k + 1)π}, where k ranges over all integers.

Fermat and Lagrange found calculus-based formulae for identifying optima, while Newton and Gauss proposed iterative methods for moving towards an optimum.

The term " linear programming" for certain optimization cases was due to George B. Dantzig, although much of the theory had been introduced by Leonid Kantorovich in 1939. (Programming in this context does not refer to computer programming, but comes from the use of program by the United States military to refer to proposed training and logistics schedules, which were the problems Dantzig studied at that time.) Dantzig published the Simplex algorithm in 1947, and John von Neumann developed the theory of duality in the same year.[ citation needed]

Other notable researchers in mathematical optimization include the following:

In a number of subfields, the techniques are designed primarily for optimization in dynamic contexts (that is, decision making over time):

Adding more than one objective to an optimization problem adds complexity. For example, to optimize a structural design, one would desire a design that is both light and rigid. When two objectives conflict, a trade-off must be created. There may be one lightest design, one stiffest design, and an infinite number of designs that are some compromise of weight and rigidity. The set of trade-off designs that improve upon one criterion at the expense of another is known as the Pareto set. The curve created plotting weight against stiffness of the best designs is known as the Pareto frontier.

A design is judged to be "Pareto optimal" (equivalently, "Pareto efficient" or in the Pareto set) if it is not dominated by any other design: If it is worse than another design in some respects and no better in any respect, then it is dominated and is not Pareto optimal.

The choice among "Pareto optimal" solutions to determine the "favorite solution" is delegated to the decision maker. In other words, defining the problem as multi-objective optimization signals that some information is missing: desirable objectives are given but combinations of them are not rated relative to each other. In some cases, the missing information can be derived by interactive sessions with the decision maker.

Classical optimization techniques due to their iterative approach do not perform satisfactorily when they are used to obtain multiple solutions, since it is not guaranteed that different solutions will be obtained even with different starting points in multiple runs of the algorithm.

Classification of critical points and extrema

Many optimization algorithms need to start from a feasible point. One way to obtain such a point is to relax the feasibility conditions using a slack variable; with enough slack, any starting point is feasible. Then, minimize that slack variable until the slack is null or negative.

Optima of equality-constrained problems can be found by the Lagrange multiplier method. The optima of problems with equality and/or inequality constraints can be found using the ' Karush–Kuhn–Tucker conditions'.

While the first derivative test identifies points that might be extrema, this test does not distinguish a point that is a minimum from one that is a maximum or one that is neither. When the objective function is twice differentiable, these cases can be distinguished by checking the second derivative or the matrix of second derivatives (called the Hessian matrix) in unconstrained problems, or the matrix of second derivatives of the objective function and the constraints called the bordered Hessian in constrained problems. The conditions that distinguish maxima, or minima, from other stationary points are called 'second-order conditions' (see ' Second derivative test'). If a candidate solution satisfies the first-order conditions, then the satisfaction of the second-order conditions as well is sufficient to establish at least local optimality.

Sensitivity and continuity of optima

The envelope theorem describes how the value of an optimal solution changes when an underlying parameter changes. The process of computing this change is called comparative statics.

The maximum theorem of Claude Berge (1963) describes the continuity of an optimal solution as a function of underlying parameters.

For unconstrained problems with twice-differentiable functions, some critical points can be found by finding the points where the gradient of the objective function is zero (that is, the stationary points). More generally, a zero subgradient certifies that a local minimum has been found for minimization problems with convex functions and other locally Lipschitz functions.

When the objective function is a convex function, then any local minimum will also be a global minimum. There exist efficient numerical techniques for minimizing convex functions, such as interior-point methods.

More generally, if the objective function is not a quadratic function, then many optimization methods use other methods to ensure that some subsequence of iterations converges to an optimal solution. The first and still popular method for ensuring convergence relies on line searches, which optimize a function along one dimension. A second and increasingly popular method for ensuring convergence uses trust regions. Both line searches and trust regions are used in modern methods of non-differentiable optimization. Usually, a global optimizer is much slower than advanced local optimizers (such as BFGS), so often an efficient global optimizer can be constructed by starting the local optimizer from different starting points.

To solve problems, researchers may use algorithms that terminate in a finite number of steps, or iterative methods that converge to a solution (on some specified class of problems), or heuristics that may provide approximate solutions to some problems (although their iterates need not converge).

Besides (finitely terminating) algorithms and (convergent) iterative methods, there are heuristics. A heuristic is any algorithm which is not guaranteed (mathematically) to find the solution, but which is nevertheless useful in certain practical situations. List of some well-known heuristics:

Problems in rigid body dynamics (in particular articulated rigid body dynamics) often require mathematical programming techniques, since you can view rigid body dynamics as attempting to solve an ordinary differential equation on a constraint manifold; [5] the constraints are various nonlinear geometric constraints such as "these two points must always coincide", "this surface must not penetrate any other", or "this point must always lie somewhere on this curve". Also, the problem of computing contact forces can be done by solving a linear complementarity problem, which can also be viewed as a QP (quadratic programming) problem.

This approach may be applied in cosmology and astrophysics. [6]

Economics is closely enough linked to optimization of agents that an influential definition relatedly describes economics qua science as the "study of human behavior as a relationship between ends and scarce means" with alternative uses. [7] Modern optimization theory includes traditional optimization theory but also overlaps with game theory and the study of economic equilibria. The Journal of Economic Literature codes classify mathematical programming, optimization techniques, and related topics under JEL:C61-C63.

Since the 1970s, economists have modeled dynamic decisions over time using control theory. [8] For example, dynamic search models are used to study labor-market behavior. [9] A crucial distinction is between deterministic and stochastic models. [10] Macroeconomists build dynamic stochastic general equilibrium (DSGE) models that describe the dynamics of the whole economy as the result of the interdependent optimizing decisions of workers, consumers, investors, and governments. [11] [12]

Optimization techniques are regularly used in geophysical parameter estimation problems. Given a set of geophysical measurements, e.g. seismic recordings, it is common to solve for the physical properties and geometrical shapes of the underlying rocks and fluids. The majority of problems in geophysics are nonlinear with both deterministic and stochastic methods being widely used.

Optimization techniques are used in many facets of computational systems biology such as model building, optimal experimental design, metabolic engineering, and synthetic biology. [25] Linear programming has been applied to calculate the maximal possible yields of fermentation products, [25] and to infer gene regulatory networks from multiple microarray datasets [26] as well as transcriptional regulatory networks from high-throughput data. [27] Nonlinear programming has been used to analyze energy metabolism [28] and has been applied to metabolic engineering and parameter estimation in biochemical pathways. [29]