From Wikipedia
https://en.wikipedia.org/wiki/Marble
Non-foliated, metamorphic rock, commonly used for sculpture and as a building material
This article is about the rock. For the toy, see Marble (toy). For other uses, see Marble (disambiguation). 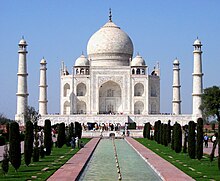 The Taj Mahal is entirely clad in marble.

Marble is a metamorphic rock composed of recrystallized carbonate minerals, most commonly calcite or dolomite. Marble is typically not foliated (layered), although there are exceptions. In geology, the term marble refers to metamorphosed limestone, but its use in stonemasonry more broadly encompasses unmetamorphosed limestone. [1] Marble is commonly used for sculpture and as a building material. 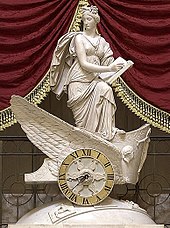 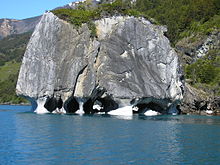 This stem is also the ancestor of the English word "marmoreal," meaning "marble-like." [7] While the English term "marble" resembles the French marbre, most other European languages (with words like "marmoreal") more closely resemble the original Ancient Greek.[ citation needed]

Marble is a rock resulting from metamorphism of sedimentary carbonate rocks, most commonly limestone or dolomite (rock). Metamorphism causes variable recrystallization of the original carbonate mineral grains. The resulting marble rock is typically composed of an interlocking mosaic of carbonate crystals. Primary sedimentary textures and structures of the original carbonate rock ( protolith) have typically been modified or destroyed.

Pure white marble is the result of metamorphism of a very pure ( silicate-poor) limestone or dolomite protolith. The characteristic swirls and veins of many colored marble varieties are usually due to various mineral impurities such as clay, silt, sand, iron oxides, or chert which were originally present as grains or layers in the limestone. Green coloration is often due to serpentine resulting from originally magnesium-rich limestone or dolomite with silica impurities. These various impurities have been mobilized and recrystallized by the intense pressure and heat of the metamorphism. 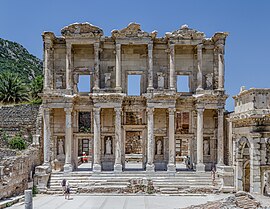 The Library of Celsus in Ephesus, Turkey. Turkey is the largest marble exporter in the world. 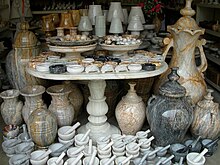 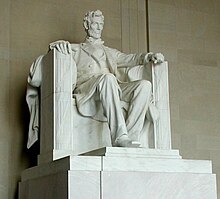 White marble has been prized for its use in sculptures [10] since classical times. This preference has to do with its softness, which made it easier to carve, relative isotropy and homogeneity, and a relative resistance to shattering. Also, the low index of refraction of calcite allows light to penetrate 12.7 to 38 millimeters into the stone before being scattered out, resulting in the characteristic waxy look which brings a lifelike luster to marble sculptures of any kind, which is why many sculptors preferred and still prefer marble for sculpting. [11]

Construction marble is a stone which is composed of calcite, dolomite or serpentine that is capable of taking a polish. [12] More generally in construction, specifically the dimension stone trade, the term marble is used for any crystalline calcitic rock (and some non-calcitic rocks) useful as building stone. For example, Tennessee marble is really a dense granular fossiliferous gray to pink to maroon Ordovician limestone, that geologists call the Holston Formation.

Ashgabat, the capital city of Turkmenistan, was recorded in the 2013 Guinness Book of Records as having the world's highest concentration of white marble buildings. [13]

In 1998, marble production was dominated by 4 countries that accounted for almost half of world production of marble and decorative stone. Italy and China were the world leaders, each representing 16% of world production, while Spain and India produced 9% and 8%, respectively. [14]

Dust produced by cutting marble could cause lung disease but more research needs to be carried out on whether dust filters and other safety products reduce this risk. [16]

Acids damage marble, because the calcium carbonate in marble reacts with them, releasing carbon dioxide (technically speaking, carbonic acid, but that decomposes quickly to CO2 and H2O) and other soluble salts : [18]

Thus, vinegar or other acidic solutions should never be used on marble. Likewise, outdoor marble statues, gravestones, or other marble structures are damaged by acid rain whether by carbonation, sulfation or the formation of "black-crust" (accumulation of calcium sulphate, nitrates and carbon particles). [18]

Crystallization refers to a sometimes controversial method of imparting a glossy more durable finish on to a marble floor (CaCO3). It involves polishing the surface with an acidic solution and a steel wool pad on a flooring machine. The chemical reaction below shows a typical process using magnesium fluorosilicate (MgSiF6) and hydrochloric acid (HCl) taking place.

The resulting calcium hexafluorosilicate (CaSiF6) is bonded to the surface of the marble. This is harder, more glossy and stain resistant compared to the original surface.

The other often used method of finishing marble is the use of polishing with oxalic acid (H2C2O4), an organic acid. The resulting reaction is as follows.

In this case the calcium oxalate (CaC2O4) formed in the reaction is washed away with the slurry leaving a surface that has not been chemically changed. [19]

As the favorite medium for Greek and Roman sculptors and architects (see classical sculpture), marble has become a cultural symbol of tradition and refined taste. Its extremely varied and colorful patterns make it a favorite decorative material, and it is often imitated in background patterns for computer displays, etc.

Places named after the stone include Marblehead, Massachusetts; Marblehead, Ohio; Marble Arch, London; the Sea of Marmara; India's Marble Rocks; and the towns of Marble, Minnesota; Marble, Colorado; Marble Falls, Texas, and Marble Hill, Manhattan, New York. The Elgin Marbles are marble sculptures from the Parthenon in Athens that are on display in the British Museum. They were brought to Britain by the Earl of Elgin.

Wikisource has the text of the 1911 Encyclopædia Britannica article " Marble".
Retrieved from " https://en.wikipedia.org/?title=Marble&oldid=1112549842"
Categories:
Hidden categories: