From Wikipedia
https://en.wikipedia.org/wiki/Magnetic_declination
Angle on the horizontal plane between magnetic north and true north 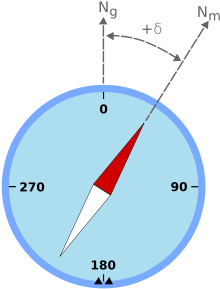 The term magnetic deviation is sometimes used loosely to mean the same as magnetic declination, but more correctly it refers to the error in a compass reading induced by nearby metallic objects, such as iron on board a ship or aircraft.

Magnetic declination should not be confused with magnetic inclination, also known as magnetic dip, which is the angle that the Earth's magnetic field lines make with the downward side of the horizontal plane.

Declination change over time and location

In most areas, the spatial variation reflects the irregularities of the flows deep in the Earth; in some areas, deposits of iron ore or magnetite in the Earth's crust may contribute strongly to the declination. Similarly, secular changes to these flows result in slow changes to the field strength and direction at the same point on the Earth.

The magnetic declination in a given area may (most likely will) change slowly over time, possibly as little as 2–2.5 degrees every hundred years or so, depending upon how far from the magnetic poles it is. For a location closer to the pole like Ivujivik, the declination may change by 1 degree every three years. This may be insignificant to most travellers, but can be important if using magnetic bearings from old charts or metes (directions) in old deeds for locating places with any precision.

As an example of how variation changes over time, see the two charts of the same area (western end of Long Island Sound), below, surveyed 124 years apart. The 1884 chart shows a variation of 8 degrees, 20 minutes West. The 2008 chart shows 13 degrees, 15 minutes West. 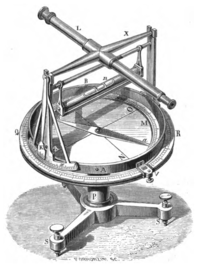 The magnetic declination at any particular place can be measured directly by reference to the celestial poles—the points in the heavens around which the stars appear to revolve, which mark the direction of true north and true south. The instrument used to perform this measurement is known as a declinometer.

The approximate position of the north celestial pole is indicated by Polaris (the North Star). In the northern hemisphere, declination can therefore be approximately determined as the difference between the magnetic bearing and a visual bearing on Polaris. Polaris currently traces a circle 0.73° in radius around the north celestial pole, so this technique is accurate to within a degree. At high latitudes a plumb-bob is helpful to sight Polaris against a reference object close to the horizon, from which its bearing can be taken. [5]

A rough estimate of the local declination (within a few degrees) can be determined from a general isogonic chart of the world or a continent, such as those illustrated above. Isogonic lines are also shown on aeronautical and nautical charts.

Larger-scale local maps may indicate current local declination, often with the aid of a schematic diagram. Unless the area depicted is very small, declination may vary measurably over the extent of the map, so the data may be referred to a specific location on the map. The current rate and direction of change may also be shown, for example in arcminutes per year. The same diagram may show the angle of grid north (the direction of the map's north–south grid lines), which may differ from true north.

On the topographic maps of the U.S. Geological Survey (USGS), for example, a diagram shows the relationship between magnetic north in the area concerned (with an arrow marked "MN") and true north (a vertical line with a five-pointed star at its top), with a label near the angle between the MN arrow and the vertical line, stating the size of the declination and of that angle, in degrees, mils, or both.

Worldwide empirical model of the deep flows described above are available for describing and predicting features of the Earth's magnetic field, including the magnetic declination for any given location at any time in a given timespan. One such model is World Magnetic Model (WMM) of the US and UK. It is built with all the information available to the map-makers at the start of the five-year period it is prepared for. It reflects a highly predictable rate of change, [a] and is usually more accurate than a map—which is likely months or years out of date.[ citation needed] For historical data, the IGRF and GUFM models may be used. Tools for using such models include:

The WMM, IGRF, and GUFM models only describe the magnetic field as emitted at the core-mantle boundary. In practice, the magnetic field is also distorted by the Earth crust, the distortion being magnetic anomaly. For more precise estimates, a larger crust-aware model such as the Enhanced Magnetic Model may be used. (See cited page for a comparison of declination contours.) [9] 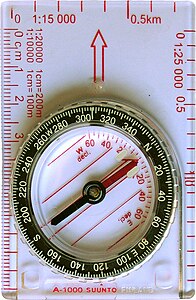 A magnetic compass points to magnetic north, not geographic north. Compasses of the style commonly used for hiking include a declination adjustment in the form of a bezel which swivels relative to the base plate. To establish a declination the bezel is rotated until the desired number of degrees plus or minus lie between the bezel's designation N (for North) and the direction indicated by the magnetic end of the needle (usually painted red). This allows the user to establish a true bearing for travel or orientation by aligning the embossed red indicator arrow on the base plate with a landmark or heading on a map. A compass thus adjusted can be said to be reading “true north” instead of magnetic north (as long as it remains within an area on the same isogonic line).

In the image to the left, the bezel's N has been aligned with the direction indicated by the magnetic end of the compass needle, reflecting a magnetic declination of 0 degrees. The arrow on the base plate indicates a bearing of 312 degrees. 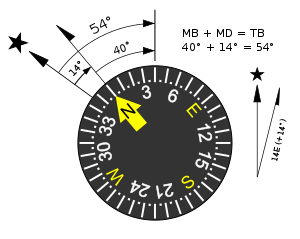 On aircraft or vessels there are three types of bearing: true, magnetic, and compass bearing. Compass error is divided into two parts, namely magnetic variation and magnetic deviation, the latter originating from magnetic properties of the vessel or aircraft. Variation and deviation are signed quantities. As discussed above, positive (easterly) variation indicates that magnetic north is east of geographic north. Likewise, positive (easterly) deviation indicates that the compass needle is east of magnetic north. [10]

Compass, magnetic and true bearings are related by:

The general equation relating compass and true bearings is

To calculate true bearing from compass bearing (and known deviation and variation):

To calculate compass bearing from true bearing (and known deviation and variation):

These rules are often combined with the mnemonic "West is best, East is least"; that is to say, add W declinations when going from True bearings to Magnetic bearings, and subtract E ones.

Another simple way to remember which way to apply the correction for continental USA is:

Magnetic deviation is the angle from a given magnetic bearing to the related bearing mark of the compass. Deviation is positive if a compass bearing mark (e.g., compass north) is right of the related magnetic bearing (e.g., magnetic north) and vice versa. For example, if the boat is aligned to magnetic north and the compass' north mark points 3° more east, deviation is +3°. Deviation varies for every compass in the same location and depends on such factors as the magnetic field of the vessel, wristwatches, etc. The value also varies depending on the orientation of the boat. Magnets and/or iron masses can correct for deviation, so that a particular compass accurately displays magnetic bearings. More commonly, however, a correction card lists errors for the compass, which can then be compensated for arithmetically. Deviation must be added to compass bearing to obtain magnetic bearing.

Aviation sectional charts (maps) and databases used for air navigation are based on true north and south because the planetary rotational poles do not change location on the landscape anywhere near as much as do the magnetic poles. That said, low-tech ways of identifying true north or south include waiting for noon with a stick in the ground to judge the shortest shadow, or waiting for a clear night in order to consult a pole star. By contrast, with a low-tech magnetic compass, one can identify magnetic north or south at any time, hence the presence of a magnetic compass in every cockpit, even today in the GPS era. When onboard electronics fail, pilots can still rely on paper charts and Edwardian-era instruments such as a magnetic compass. There is still the need to convert magnetic to true, however. Sectional charts indicate by dashed magenta lines the number of degrees variation between true and magnetic at any local vicinity as of the printing of that chart. Since the true locations of the magnetic poles meander over time, occasionally quite dramatically, charts and databases are required to be updated at least twice each year. Another reason for frequent chart updates is construction (new tall radio towers, runway renovation, etc.).

Radionavigation aids located on the ground, such as VORs, are also checked and updated to keep them aligned with magnetic north to allow pilots to use their magnetic compasses for accurate and reliable in-plane navigation.

Runways are designated by a number between 01 and 36, which is generally one tenth of the magnetic azimuth of the runway's heading: a runway numbered 09 points east (90°), runway 18 is south (180°), runway 27 points west (270°) and runway 36 points to the north (360° rather than 0°). [12] However, due to magnetic declination, changes in runway designators have to occur at times to keep their designation in line with the runway's magnetic heading. An exception is made for runways within the Northern Domestic Airspace of Canada; these are numbered relative to true north because proximity to the magnetic North Pole makes the magnetic declination large and changes in it happen at a high pace.

GPS systems used for air navigation can use magnetic north or true north. In order to make them more compatible with systems that depend on magnetic north, magnetic north is often chosen, at the pilot's preference. The GPS receiver natively reads in true north, but can elegantly calculate magnetic north based on its true position and data tables; the unit can then calculate the current location and direction of the north magnetic pole and (potentially) any local variations, if the GPS is set to use magnetic compass readings.