From Wikipedia
https://en.wikipedia.org/wiki/Macropodidae
Family of mammals (marsupials)
Not to be confused with Macropodia or Macropodinae.

Macropodidae is a family of marsupials, commonly known as kangaroos, wallabies, tree-kangaroos, wallaroos, pademelons, quokkas, and several other terms. These genera are allied to the suborder Macropodiformes, containing other macropods, and are native to the Australian continent (the mainland and Tasmania), New Guinea and nearby islands. [2] 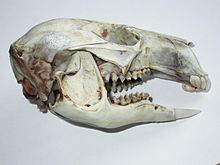 Although omnivorous kangaroos lived in the past, modern macropods are herbivorous. Some are browsers, but most are grazers and are equipped with appropriately specialised teeth for cropping and grinding up fibrous plants, in particular grasses and sedges. In general, macropods have a broad, straight row of cutting teeth at the front of the mouth, no canine teeth, and a gap before the molars. The molars are large and, unusually, do not appear all at once but a pair at a time at the back of the mouth as the animal ages, eventually becoming worn down by the tough, abrasive grasses and falling out. Like many Macropodiformes, early kangaroos had plagiaulacoids, but these converted into normal molars in more derived species. [3] Most species have four molars and, when the last pair is too worn to be of use, the animals starve to death. [4] The dental formula for macropods is 3.0–1.2.41.000.2.4.

Like the eutherian ruminants of the Northern Hemisphere (sheep, cattle, and so on), macropods have specialised digestive systems that use a high concentration of bacteria, protozoans, and fungi in the first chamber of a complex stomach to digest plant material. The details of organisation are quite different, but the end result is somewhat similar.

The particular structure-function relationship of the Macropodidae gut and the gut microbiota allows the degradation of lignocellulosic material with a relatively low emission of methane relative to other ruminants. These low emissions are partly explained by the anatomical differences between the macropodid digestive system and that of ruminants, resulting in shorter retention times of particulate digesta within the foregut. This fact might prevent the establishment of methanogenic archaea, which has been found in low levels in tammar wallabies (Notamacropus eugenii) and eastern grey kangaroo (M. giganteus). Metagenomic analysis revealed that the foregut of tammar wallabies mainly contains bacteria belonging to the phyla Bacillota, Bacteroidota, and Pseudomonadota. Among Pseudomonadota populations of the Succinivibrionaceae family are overrepresented and may contribute to low methane emissions. [5]

Macropods vary in size considerably, but most have very large hind legs and long, powerfully muscled tails. The term macropod comes from the Greek for "large foot" and is appropriate: most have very long, narrow hind feet with a distinctive arrangement of toes. The fourth toe is very large and strong, the fifth toe moderately so; the second and third are fused; and the first toe is usually missing. Their short front legs have five separate digits. Some macropods have seven carpal bones instead of the usual eight in mammals. [6] All have relatively small heads and most have large ears, except for tree-kangaroos, which must move quickly between closely spaced branches. The young are born very small and the pouch opens forward.

The unusual development of the hind legs is optimised for economical long-distance travel at fairly high speed. The greatly elongated feet provide enormous leverage for the strong legs, but the famous kangaroo hop has more: kangaroos and wallabies have a unique ability to store elastic strain energy in their tendons. In consequence, most of the energy required for each hop is provided "free" by the spring action of the tendons (rather than by muscular effort). The main limitation on a macropod's ability to leap is not the strength of the muscles in the hindquarters, it is the ability of the joints and tendons to withstand the strain of hopping. 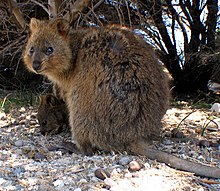 A female quokka with a joey

In addition, the hopping action is linked to breathing. As the feet leave the ground, air is expelled from the lungs by what amounts to an internal piston; bringing the feet forward ready for landing fills the lungs again, providing further energy efficiency. Studies of kangaroos and wallabies have demonstrated that, beyond the minimum energy expenditure required to hop at all, increased speed requires very little extra effort (much less than the same speed increase in, say, a horse, a dog, or a human), and also that little extra energy is required to carry extra weight – something that is of obvious importance to females carrying large pouch young.[ citation needed]

The ability of larger macropods to survive on poor-quality, low-energy feed, and to travel long distances at high speed without great energy expenditure (to reach fresh food supplies or waterholes, and to escape predators) has been crucial to their evolutionary success on a continent that, because of poor soil fertility and low, unpredictable average rainfall, offers only very limited primary plant productivity.

Gestation in macropods lasts about a month, being slightly longer in the largest species. Typically, only a single young is born, weighing less than 1 g (0.035 oz) at birth. They soon attach themselves to one of four teats inside the mother's pouch. The young leave the pouch after five to 11 months, and are weaned after a further two to six months. Macropods reach sexual maturity at one to three years of age, depending on the species. [7] 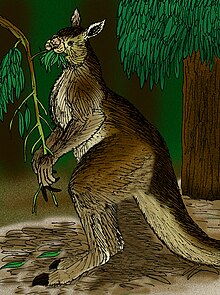 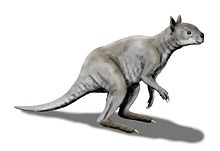 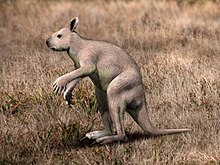 The evolutionary ancestors of marsupials split from placental mammals during the Jurassic period about 160 million years ago (Mya). [8] The earliest known fossil macropod dates back about 11.61 to 28.4 Mya, either in the Miocene or Late Oligocene, and was uncovered in South Australia. Unfortunately, the fossil could not be identified any further than the family. A Queensland fossil of a species similar to Hadronomas has been dated at around 5.33 to 11.61 Mya, falling in the Late Miocene or Early Pliocene. The earliest completely identifiable fossils are from around 5.33 Mya. [9] 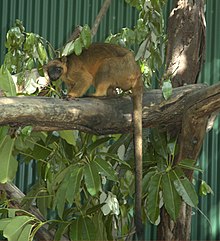 Tree-kangaroos have smaller ears for easier maneuvering between tree branches, and a much longer tail. 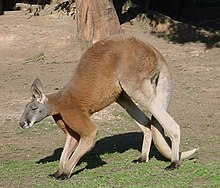 A red kangaroo showing pentapedal locomotion while grazing: the forelimbs and tail take the animal's weight while the hind legs are brought forward. 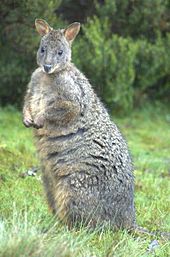 A pademelon has typical macropod legs, although they are obscured by fur in this image. 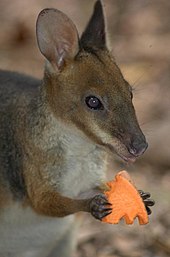 A pademelon eating a slice of sweet potato: Although usually grazing directly from the ground with their mouth, macropods may also use their front paws to assist in grazing.

A " forester kangaroo" hopping over a puddle

The two living subfamilies in the family Macropodidae are the Lagostrophinae, represented by a single species, the banded hare-wallaby, and the remainder, which make up the subfamily Macropodinae (65 species).