From Wikipedia, the free encyclopedia
Italian mathematician and cleric

Fra Luca Bartolomeo de Pacioli (sometimes Paccioli or Paciolo; c. 1447 – 19 June 1517) [3] was an Italian mathematician, Franciscan friar, collaborator with Leonardo da Vinci, and an early contributor to the field now known as accounting. He is referred to as the father of accounting and bookkeeping and he was the first person to publish a work on the double-entry system of book-keeping on the continent. [4] [a] He was also called Luca di Borgo after his birthplace, Borgo Sansepolcro, Tuscany.

Several of his works were plagiarised from Piero della Francesca, in what has been called "probably the first full-blown case of plagiarism in the history of mathematics". [5] 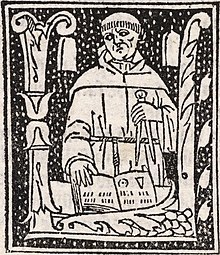 Luca Pacioli was born between 1446 and 1448 in the Tuscan town of Sansepolcro where he received an abbaco education. This was education in the vernacular (i.e., the local tongue) rather than Latin and focused on the knowledge required of merchants. His father was Bartolomeo Pacioli; however, Luca Pacioli was said to have lived with the Befolci family as a child in his birth town Sansepolcro. [7] He moved to Venice around 1464, where he continued his own education while working as a tutor to the three sons of a merchant. It was during this period that he wrote his first book, a treatise on arithmetic for the boys he was tutoring. Between 1472 and 1475, he became a Franciscan friar. [7] Thus, he could be referred to as Fra ('Friar') Luca.

In 1475, he started teaching in Perugia as a private teacher before becoming first chair in mathematics in 1477. During this time, he wrote a comprehensive textbook in the vernacular for his students. He continued to work as a private tutor of mathematics and was instructed to stop teaching at this level in Sansepolcro in 1491. In 1494, his first book, Summa de arithmetica, geometria, Proportioni et proportionalita, was published in Venice. In 1497, he accepted an invitation from Duke Ludovico Sforza to work in Milan. There he met, taught mathematics to, collaborated, and lived with Leonardo da Vinci. In 1499, Pacioli and Leonardo were forced to flee Milan when Louis XII of France seized the city and drove out their patron. Their paths appear to have finally separated around 1506. Pacioli died at about the age of 70 on 19 June 1517, most likely in Sansepolcro, where it is thought that he had spent much of his final years. [7]

The first printed illustration of a rhombicuboctahedron, by Leonardo da Vinci, published in Divina proportione 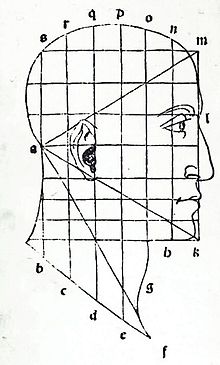 Woodcut illustrating the proportions of the human face from the second part of Divina proportione, which covers the Vitruvian system
Further information: Mathematics and art

The majority of the second volume of Summa de arithmetica, geometria. Proportioni et proportionalita was a slightly rewritten version of one of Piero della Francesca's works. The third volume of Pacioli's Divina proportione was an Italian translation of Piero della Francesca's Latin book De quinque corporibus regularibus. In neither case did Pacioli include an attribution to Piero. He was severely criticized for this and accused of plagiarism by sixteenth-century art historian and biographer Giorgio Vasari. R. Emmett Taylor (1889–1956) said that Pacioli may have had nothing to do with the translated volume Divina proportione, and that it may just have been appended to his work. However, no such defense can be presented concerning the inclusion of Piero della Francesca's material in Pacioli's Summa.

Impact on accounting and business

Pacioli dramatically affected the practice of accounting by describing the double-entry accounting method used in parts of Italy. This revolutionized how businesses oversaw their operations, enabling improved efficiency and profitability. The Summa's section on accounting was used internationally as an accounting textbook up to the mid-16th century. The essentials of double-entry accounting have for the most part remained unchanged for over 500 years. "Accounting practitioners in public accounting, industry, and not-for-profit organizations, as well as investors, lending institutions, business firms, and all other users for financial information are indebted to Luca Pacioli for his monumental role in the development of accounting." [12]

Luca Pacioli also wrote an unpublished treatise on chess, De ludo scachorum (On the Game of Chess). Long thought to have been lost, a surviving manuscript was rediscovered in 2006, in the 22,000-volume library of Count Guglielmo Coronini-Cronberg in Gorizia. A facsimile edition of the book was published in Pacioli's home town of Sansepolcro in 2008. Based on Leonardo da Vinci's long association with the author and his having illustrated Divina proportione, some scholars speculate that Leonardo either drew the chess problems that appear in the manuscript or at least designed the chess pieces used in the problems. [14] [15] [16] [17]