From Wikipedia
https://en.wikipedia.org/wiki/Low-key_lighting
Stage lighting style
This article is about a high-contrast lighting setup commonly used in film noir. For the style of photograph or painting which features predominantly dark tones, see Low key. 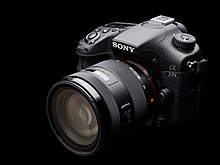 Low-key lighting is often used in product advertising. This camera is lit by a soft box positioned above, with a white reflector to the front-left

Low key light accentuates the contours of the subject by throwing areas into shade while a fill light or reflector may illuminate the shadow areas to control contrast. [2] [1] The relative strength of key-to-fill, known as the lighting ratio, can be measured using a light meter. Low key lighting has a higher lighting ratio, e.g., 8:1, than high-key lighting, which can approach 1:1.

The term "low key" is also used in cinematography and photography to refer to any scene with a high lighting ratio, especially if there is a predominance of shadowy areas. It tends to heighten the sense of alienation felt by the viewer, hence is typically used in dark dramas/ thrillers, film noir, and horror genres. [1] Low-key lighting is also associated with German Expressionism.