From Wikipedia
https://en.wikipedia.org/wiki/Loom
Device for weaving textiles
For other uses, see Loom (disambiguation).
Not to be confused with Knitting machine. 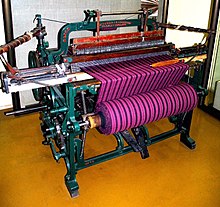 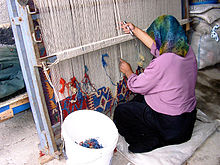 A woman in Konya, Turkey, works at a vertical loom

A loom is a device used to weave cloth and tapestry. The basic purpose of any loom is to hold the warp threads under tension to facilitate the interweaving of the weft threads. The precise shape of the loom and its mechanics may vary, but the basic function is the same.

The word "loom" derives from the Old English geloma, formed from ge- (perfective prefix) and loma, a root of unknown origin; the whole word geloma meant a utensil, tool, or machine of any kind. In 1404 "lome" was used to mean a machine to enable weaving thread into cloth. [1] [2][ failed verification] By 1838 "loom" had gained the additional meaning of a machine for interlacing thread.[ citation needed]

See also: Weaving and Textile manufacturing terminology
Weaving demonstration on an 1830 handloom in the weaving museum in Leiden

The major components of the loom are the warp beam, heddles, harnesses or shafts (as few as two, four is common, sixteen not unheard of), shuttle, reed and takeup roll. In the loom, yarn processing includes shedding, picking, battening and taking-up operations. These are the principal motions. 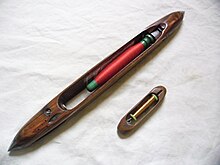 There are two secondary motions, because with each weaving operation the newly constructed fabric must be wound on a cloth beam. This process is called taking up. At the same time, the warp yarns must be let off or released from the warp beams. To become fully automatic, a loom needs a tertiary motion, the filling stop motion. This will brake the loom if the weft thread breaks. [4] An automatic loom requires 0.125 hp to 0.5 hp to operate.

The back strap loom is a simple loom that has its roots in ancient civilizations. Andean textiles, still made today with the back strap loom, originated thousands of years ago with the same back strap loom process. It consists of two sticks or bars between which the warps are stretched. One bar is attached to a fixed object and the other to the weaver, usually by means of a strap around the back. The weaver leans back and uses their body weight to tension the loom. On traditional looms, the two main sheds are operated by means of a shed roll over which one set of warps pass, and continuous string heddles which encase each of the warps in the other set. To open the shed controlled by the string heddles, the weaver relaxes tension on the warps and raises the heddles. The other shed is usually opened by simply drawing the shed roll toward the weaver.

Both simple and complex textiles can be woven on this loom. Width is limited to how far the weaver can reach from side to side to pass the shuttle. Warp faced textiles, often decorated with intricate pick-up patterns woven in complementary and supplementary warp techniques are woven by indigenous peoples today around the world. They produce such things as belts, ponchos, bags, hatbands and carrying cloths. Supplementary weft patterning and brocading is practiced in many regions. Balanced weaves are also possible on the backstrap loom. Today, commercially produced backstrap loom kits often include a rigid heddle.[ citation needed]

The warp-weighted loom is a vertical loom that may have originated in the Neolithic period. The earliest evidence of warp-weighted looms comes from sites belonging to the Starčevo culture in modern Serbia and Hungary and from late Neolithic sites in Switzerland. [7] This loom was used in Ancient Greece, and spread north and west throughout Europe thereafter. [8] Its defining characteristic is hanging weights (loom weights) which keep bundles of the warp threads taut. Frequently, extra warp thread is wound around the weights. When a weaver has reached the bottom of the available warp, the completed section can be rolled around the top beam, and additional lengths of warp threads can be unwound from the weights to continue. This frees the weaver from vertical size constraint.

A drawloom is a hand-loom for weaving figured cloth. In a drawloom, a "figure harness" is used to control each warp thread separately. [9] A drawloom requires two operators, the weaver and an assistant called a "drawboy" to manage the figure harness. The earliest confirmed drawloom fabrics come from the State of Chu and date c. 400 BC. [10] Most scholars attribute the invention of the drawloom to the ancient Chinese, although some speculate an independent invention from ancient Syria since drawloom fabrics found in Dura-Europas are thought to date before 256 AD. [10] [11] The draw loom for patterned weaving was invented in ancient China during the Han Dynasty. [12] Chinese weavers and artisans used foot-powered multi-harness looms and jacquard looms for silk weaving and embroidery; both of which were cottage industries with imperial workshops. [13] The Chinese-invented drawloom enhanced and sped up the production of silk and play a significant role in Chinese silk weaving. The loom was later introduced to Persia, India, and Europe. [12]

A handloom is a simple machine used for weaving. In a wooden vertical-shaft loom, the heddles are fixed in place in the shaft. The warp threads pass alternately through a heddle, and through a space between the heddles (the shed), so that raising the shaft raises half the threads (those passing through the heddles), and lowering the shaft lowers the same threads — the threads passing through the spaces between the heddles remain in place. This was invented in the 13th century.[ citation needed] It can have a Jacquard machine attached to it. [14] Handloom weavers commonly use three types of looms: pit looms, stand looms, and frame looms. [15]

Hand weavers could only weave a cloth as wide as their armspan. If cloth needed to be wider, two people would do the task (often this would be an adult with a child). John Kay (1704–1779) patented the flying shuttle in 1733. The weaver held a picking stick that was attached by cords to a device at both ends of the shed. With a flick of the wrist, one cord was pulled and the shuttle was propelled through the shed to the other end with considerable force, speed and efficiency. A flick in the opposite direction and the shuttle was propelled back. A single weaver had control of this motion but the flying shuttle could weave much wider fabric than an arm's length at much greater speeds than had been achieved with the hand thrown shuttle.

The flying shuttle was one of the key developments in weaving that helped fuel the Industrial Revolution. The whole picking motion no longer relied on manual skill and it was just a matter of time before it could be powered.

Several other types of hand looms exist, including the simple frame loom, pit loom, free-standing loom, and the pegged loom. Each of these can be constructed, and provide work and income in developing economies. [16]

The earliest evidence of a horizontal loom is found on a pottery dish in ancient Egypt, dated to 4400 BC. It was a frame loom, equipped with foot pedals to lift the warp threads, leaving the weaver's hands free to pass and beat the weft thread. [17]

Edmund Cartwright built and patented a power loom in 1785, and it was this that was adopted by the nascent cotton industry in England. The silk loom made by Jacques Vaucanson in 1745 operated on the same principles but was not developed further. The invention of the flying shuttle by John Kay was critical to the development of a commercially successful power loom. [18] Cartwright's loom was impractical but the ideas behind it were developed by numerous inventors in the Manchester area of England where, by 1818, there were 32 factories containing 5,732 looms. [19]

Horrocks loom was viable, but it was the Roberts Loom in 1830 that marked the turning point. [20] Incremental changes to the three motions continued to be made. The problems of sizing, stop-motions, consistent take-up, and a temple to maintain the width remained. In 1841, Kenworthy and Bullough produced the Lancashire Loom [21] which was self-acting or semi-automatic. This enables a youngster to run six looms at the same time. Thus, for simple calicos, the power loom became more economical to run than the hand loom – with complex patterning that used a dobby or Jacquard head, jobs were still put out to handloom weavers until the 1870s. Incremental changes were made such as the Dickinson Loom, culminating in the Keighley-born inventor Northrop, who was working for the Draper Corporation in Hopedale producing the fully automatic Northrop Loom. This loom recharged the shuttle when the pirn was empty. The Draper E and X models became the leading products from 1909. They were challenged by synthetic fibres such as rayon. [22] By 1942, faster, more efficient, and shuttleless Sulzer and rapier looms had been introduced. [23] Modern industrial looms can weave at 2,000 weft insertions per minute. [24] 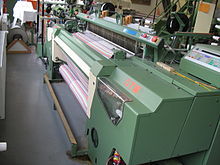 Different types of looms are most often defined by the way that the weft, or pick, is inserted into the warp. Many advances in weft insertion have been made in order to make manufactured cloth more cost effective. There are five main types of weft insertion and they are as follows:

A dobby loom is a type of floor loom that controls the whole warp threads using a dobby head. Dobby is a corruption of "draw boy" which refers to the weaver's helpers who used to control the warp thread by pulling on draw threads. A dobby loom is an alternative to a treadle loom, where multiple harnesses (shafts) were controlled by foot treadles – one for each harness.

The Jacquard loom is a mechanical loom, invented by Joseph Marie Jacquard in 1801, which simplifies the process of manufacturing textiles with complex patterns such as brocade, damask and matelasse. [25] [26] The loom is controlled by punched cards with punched holes, each row of which corresponds to one row of the design. Multiple rows of holes are punched on each card and the many cards that compose the design of the textile are strung together in order. It is based on earlier inventions by the Frenchmen Basile Bouchon (1725), Jean Baptiste Falcon (1728) and Jacques Vaucanson (1740). [27] To call it a loom is a misnomer, a Jacquard head could be attached to a power loom or a hand loom, the head controlling which warp thread was raised during shedding. Multiple shuttles could be used to control the colour of the weft during picking. The Jacquard loom is the predecessor to the computer punched card readers of the 19th and 20th centuries. [28]

A circular loom is used to create a seamless tube of fabric for products such as hosiery, sacks, clothing, fabric hose (such as fire hose) and the like. Circular looms can be small jigs used for circular knitting [29] or large high-speed machines for modern garments. [30] Modern circular looms use up to ten shuttles driven from below in a circular motion by electromagnets for the weft yarns, and cams to control the warp threads. The warps rise and fall with each shuttle passage, unlike the common practice of lifting all of them at once.

The loom is a symbol of cosmic creation and the structure upon which individual destiny is woven. This symbolism is encapsulated in the classical myth of Arachne who was changed into a spider by the goddess Athena, who was jealous of her skill at the godlike craft of weaving. [31] In Maya civilization the goddess Ixchel taught the first woman how to weave at the beginning of time. [32]

Look up loom in Wiktionary, the free dictionary.