On 29 December 2002, a Long March 2F launched Shenzhou 4 for a final uncrewed test of the Shenzhou spacecraft for the upcoming flight of the first crewed mission. Until then, all missions were uncrewed.

On 15 October 2003, a Long March 2F launched Shenzhou 5, China's maiden crewed mission and achieved its first human spaceflight. Since then, the rocket has launched eleven more missions into orbit with the latest being Shenzhou 13. [4] [5]

Differences from the Long March 2E 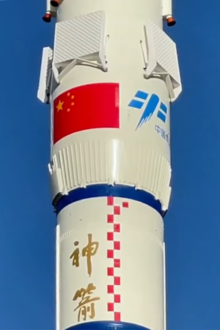 Externally, the rocket is similar to the Long March 2E from which it was derived. Most of the changes involve the addition of redundant systems to improve safety, although there are some structural modifications that allow the rocket to support the heavier fairing required by the Shenzhou capsule. The rocket is also capable of lifting heavier payloads with the addition of extra boosters to the first stage. [6]

The rocket also has an "advanced fault monitoring and diagnosis system to help the astronauts escape in time of emergency" (in other words, a launch escape system), and is the first Chinese made rocket to be assembled and rolled out to its launch site vertically. [7]

A derivative called Long March 2F/G, first launched in 2011, was designed to launch space laboratories such as Tiangong-1 and Tiangong-2. It dispenses with the launch escape system and supports a larger fairing to accommodate the bulkier payloads. [8]

During the Shenzhou 5 flight, Yang Liwei became unwell due to heavy vibrations from the rocket. Although the problem was reduced somewhat by modifications to the rocket, vibrations were reported again in Shenzhou 6 necessitating further changes. According to Jing Muchun, chief designer of the Long March 2F "We made changes to the pipelines of the rocket engine, adjusting its frequency. A new design for the pressure accumulator produced evident results. The vibration has now been reduced by more than 50%". [9]

The predecessor Long March 2E had also been known for vibration. During two launches, excessive vibration caused the collapse of the payload fairing, destroying the Optus B2 and Apstar 2 satellites. [10] After the payload fairing was redesigned, excessive vibration also damaged the AsiaSat 2 satellite during launch. The Long March 2E was withdrawn from the geostationary launch market a year later. [11]