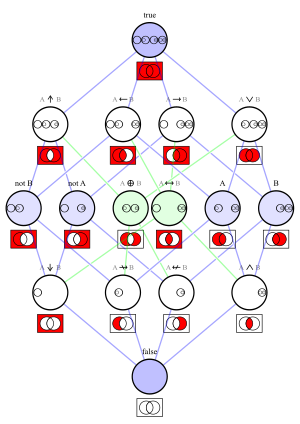 can be used to join the two atomic formulas

A logical connective is similar to, but not equivalent to, a syntax commonly used in programming languages called a conditional operator. [1][ better source needed]

Logical connectives can be used to link zero or more statements, so one can speak about n-ary logical connectives. The boolean constants True and False can be thought of as zero-ary operators. Negation is a 1-ary connective, and so on.

For example, the meaning of the statements it is raining (denoted by P) and I am indoors (denoted by Q) is transformed, when the two are combined with logical connectives:

It is also common to consider the always true formula and the always false formula to be connective:

Some authors used letters for connectives at some time of the history: u. for conjunction (German's "und" for "and") and o. for disjunction (German's "oder" for "or") in earlier works by Hilbert (1904); Np for negation, Kpq for conjunction, Dpq for alternative denial, Apq for disjunction, Xpq for joint denial, Cpq for implication, Epq for biconditional in Łukasiewicz (1929); [15] cf. Polish notation.

Such a logical connective as converse implication "←" is actually the same as material conditional with swapped arguments; thus, the symbol for converse implication is redundant. In some logical calculi (notably, in classical logic), certain essentially different compound statements are logically equivalent. A less trivial example of a redundancy is the classical equivalence between ¬P ∨ Q and P → Q. Therefore, a classical-based logical system does not need the conditional operator "→" if "¬" (not) and "∨" (or) are already in use, or may use the "→" only as a syntactic sugar for a compound having one negation and one disjunction.

One approach is to choose a minimal set, and define other connectives by some logical form, as in the example with the material conditional above. The following are the minimal functionally complete sets of operators in classical logic whose arities do not exceed 2:

Another approach is to use with equal rights connectives of a certain convenient and functionally complete, but not minimal set. This approach requires more propositional axioms, and each equivalence between logical forms must be either an axiom or provable as a theorem.

The situation, however, is more complicated in intuitionistic logic. Of its five connectives, {∧, ∨, →, ¬, ⊥}, only negation "¬" can be reduced to other connectives (see False (logic) § False, negation and contradiction for more). Neither conjunction, disjunction, nor material conditional has an equivalent form constructed from the other four logical connectives.

The meanings of natural language connectives are not precisely identical to their nearest equivalents in classical logic. In particular, disjunction can receive an exclusive interpretation in many languages. Some researchers have taken this fact as evidence that natural language semantics is nonclassical. However, others maintain classical semantics by positing pragmatic accounts of exclusivity which create the illusion of nonclassicality. In such accounts, exclusivity is typically treated as a scalar implicature. Related puzzles involving disjunction include free choice inferences, Hurford's Constraint, and the contribution of disjunction in alternative questions.

The following table shows the standard classically definable approximations for the English connectives.

, ⊤, ⊥.
Duality
To read the truth-value assignments for the operation from top to bottom on its truth table is the same as taking the complement of reading the table of the same or another connective from bottom to top. Without resorting to truth tables it may be formulated as g̃(¬a1, ..., ¬an) = ¬g(a1, ..., an). E.g., ¬.
Truth-preserving
The compound all those arguments are tautologies is a tautology itself. E.g., ∨, ∧, ⊤, →, ↔, ⊂ (see validity).
Falsehood-preserving
The compound all those argument are contradictions is a contradiction itself. E.g., ∨, ∧,

For classical and intuitionistic logic, the "=" symbol means that corresponding implications "...→..." and "...←..." for logical compounds can be both proved as theorems, and the "≤" symbol means that "...→..." for logical compounds is a consequence of corresponding "...→..." connectives for propositional variables. Some many-valued logics may have incompatible definitions of equivalence and order (entailment).

In classical logic and some varieties of many-valued logic, conjunction and disjunction are dual, and negation is self-dual, the latter is also self-dual in intuitionistic logic.

As a way of reducing the number of necessary parentheses, one may introduce precedence rules: ¬ has higher precedence than ∧, ∧ higher than ∨, and ∨ higher than →. So for example,

Here is a table that shows a commonly used precedence of logical operators. [17]

However, not all compilers use the same order; for instance, an ordering in which disjunction is lower precedence than implication or bi-implication has also been used. [18] Sometimes precedence between conjunction and disjunction is unspecified requiring to provide it explicitly in given formula with parentheses. The order of precedence determines which connective is the "main connective" when interpreting a non-atomic formula.

A truth-functional approach to logical operators is implemented as logic gates in digital circuits. Practically all digital circuits (the major exception is DRAM) are built up from NAND, NOR, NOT, and transmission gates; see more details in Truth function in computer science. Logical operators over bit vectors (corresponding to finite Boolean algebras) are bitwise operations.

But not every usage of a logical connective in computer programming has a Boolean semantic. For example, lazy evaluation is sometimes implemented for P ∧ Q and P ∨ Q, so these connectives are not commutative if either or both of the expressions P, Q have side effects. Also, a conditional, which in some sense corresponds to the material conditional connective, is essentially non-Boolean because for if (P) then Q;, the consequent Q is not executed if the antecedent P is false (although a compound as a whole is successful ≈ "true" in such case). This is closer to intuitionist and constructivist views on the material conditional— rather than to classical logic's views.