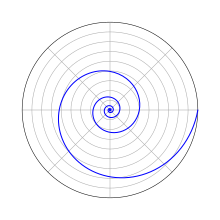 A section of the Mandelbrot set following a logarithmic spiral

A logarithmic spiral, equiangular spiral, or growth spiral is a self-similar spiral curve that often appears in nature. The first to describe a logarithmic spiral was Albrecht Dürer (1525) who called it an "eternal line" ("ewige lini"). [1] More than a century later, the curve was discussed by Descartes (1638), and later extensively investigated by Jacob Bernoulli, who called it Spira mirabilis, "the marvelous spiral".

the logarithmic spiral can be written as [2]

being the base of natural logarithms, and

The logarithmic spiral with the polar equation

can be represented in Cartesian coordinates

In the complex plane

Spira mirabilis, Latin for "miraculous spiral", is another name for the logarithmic spiral. Although this curve had already been named by other mathematicians, the specific name ("miraculous" or "marvelous" spiral) was given to this curve by Jacob Bernoulli, because he was fascinated by one of its unique mathematical properties: the size of the spiral increases but its shape is unaltered with each successive curve, a property known as self-similarity. Possibly as a result of this unique property, the spira mirabilis has evolved in nature, appearing in certain growing forms such as nautilus shells and sunflower heads. Jacob Bernoulli wanted such a spiral engraved on his headstone along with the phrase " Eadem mutata resurgo" ("Although changed, I shall arise the same."), but, by error, an Archimedean spiral was placed there instead. [3] [4] 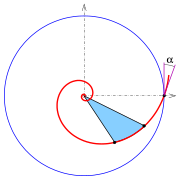 Definition of slope angle and sector

Animation showing the constant angle between an intersecting circle centred at the origin and a logarithmic spiral.

has the following properties (see Spiral): 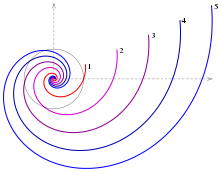 The golden spiral is a logarithmic spiral that grows outward by a factor of the golden ratio for every 90 degrees of rotation (polar slope angle about 17.03239 degrees). It can be approximated by a "Fibonacci spiral", made of a sequence of quarter circles with radii proportional to Fibonacci numbers. 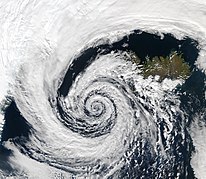 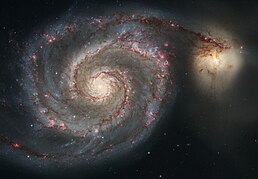 The arms of spiral galaxies often have the shape of a logarithmic spiral, here the Whirlpool Galaxy 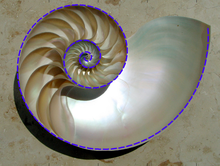 Cutaway of a nautilus shell showing the chambers arranged in an approximately logarithmic spiral. The plotted spiral (dashed blue curve) is based on growth rate parameter

, resulting in a pitch of

In several natural phenomena one may find curves that are close to being logarithmic spirals. Here follow some examples and reasons:

A kerf-canceling mechanism leverages the self similarity of the logarithmic spiral to lock in place under rotation, independent of the kerf of the cut. [15]