This is a list of the native wild mammal species recorded in Mexico. As of September 2014, there were 536 mammalian species or subspecies listed. Based on IUCN data, Mexico has 23% more noncetacean mammal species than the U.S. and Canada combined in an area only 10% as large, or a species density over 12 times that of its northern neighbors. [n 1] Mexico's high mammal biodiversity is in part a reflection of the wide array of biomes present over its latitudinal, climatic and altitudinal ranges, from lowland tropical rainforest to temperate desert to montane forest to alpine tundra. The general increase in terrestrial biodiversity moving towards the equator [1] is another important factor in the comparison. Mexico includes much of the Mesoamerican and Madrean pine-oak woodlands biodiversity hotspots. From a biogeographic standpoint, most of Mexico is linked to the rest of North America as part of the Nearctic realm. However, the lowlands of southern Mexico are linked with Central America and South America as part of the Neotropical realm. Extensive mixing of Nearctic and Neotropical mammal species commenced only three million years ago, when the formation of the Isthmus of Panama ended South America's long period of isolation and precipitated the Great American Interchange. Twenty of Mexico's extant nonflying species ( opossums, armadillos, anteaters, monkeys and caviomorph rodents) are of South American origin. Most of the megafauna that formerly inhabited the region became extinct at the end of the Pleistocene about 10,000 years ago, shortly after the arrival of the first humans. Increasing alteration and destruction of natural habitats by expanding human populations during the last several centuries is causing further attrition of the region's biodiversity, as exemplified by the " hotspot" designations (by definition, such areas have lost over 70% of their primary vegetation).

The following tags are used to highlight each species' conservation status as assessed by the International Union for Conservation of Nature; those on the left are used here, those in the second column in some other articles:

Didelphimorphia is the order of common opossums of the Western Hemisphere. Opossums probably diverged from the basic South American marsupials in the late Cretaceous or early Paleocene. They are small to medium-sized marsupials, about the size of a large house cat, with a long snout and prehensile tail.

Sirenia is an order of fully aquatic, herbivorous mammals that inhabit rivers, estuaries, coastal marine waters, swamps, and marine wetlands. All four species are endangered. They evolved about 50 million years ago, and their closest living relatives are elephants. Manatees are the only extant afrotherians in the Americas. However, a number proboscid species, some of which survived until the arrival of Paleo-Indians, once inhabited the region. Mammoths, mastodons and gomphotheres all formerly lived in Mexico. [4] [5]

Armadillos are small mammals with a bony armored shell. Two of twenty-one extant species are present in Mexico; the remainder are only found in South America, where they originated. Their much larger relatives, the pampatheres and glyptodonts, once lived in North and South America but went extinct following the appearance of humans.

The order Pilosa is extant only in the Americas and includes the anteaters, sloths, and tamanduas. Their ancestral home is South America. Numerous ground sloths, some of which reached the size of elephants, were once present in both North and South America, as well as on the Antilles, but all went extinct following the arrival of humans.

The order Primates includes the lemurs, monkeys, and apes, with the latter category including humans. It is divided into four main groupings: strepsirrhines, tarsiers, monkeys of the New World ( parvorder Platyrrhini), and monkeys and apes of the Old World. Mexico's 2 genera of nonhuman primates compares to 6 in Central America, 20 in South America, 15 in Madagascar, 23 in Africa and 19 in Asia. Mexican and Central American monkeys are recent immigrants from South America, where their ancestors arrived after rafting over from Africa roughly 25 million years ago. [6] Southeastern Mexico is the northernmost limit of the distribution of New World monkeys, which are restricted to tropical rainforest habitat. 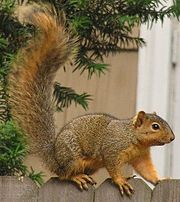 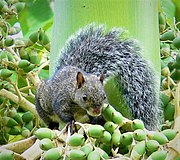 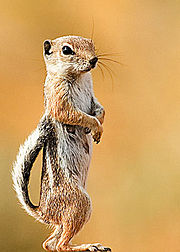 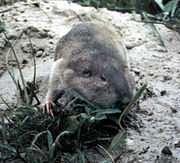 Rodents make up the largest order of mammals, with over 40% of mammalian species. They have two incisors in the upper and lower jaw which grow continually and must be kept short by gnawing. Most rodents are small, although the capybara can weigh up to 45 kg (99 lb). According to the IUCN listing, Mexico has more rodent species (236 as of April 2011) than any other country in the world (Brazil is second with 222). Of Mexico's rodents, 2% are caviomorphs, 14.5% are sciurids, 25.5% are castorimorphs and 58% are cricetids. This distribution is fairly similar to that of the remainder of North America (although sciurids are relatively twice as abundant to the north, at the expense of cricetids), but is very different from that of South America, where the corresponding figures are 36%, 3%, 1% and 60%. Of Mexico's cricetids, 17% are sigmodontine, while the figure for South America is 99.5%. [n 3] Mexico's caviomorphs are recent immigrants from South America, where their ancestors washed ashore after rafting across the Atlantic from Africa about 40–45 million years ago. [6] [7] Conversely, South America's sciurids, castorimorphs and cricetids are recent immigrants from Central America (with sigmodontines getting a head start on the others).

The lagomorphs comprise two families, Leporidae ( hares and rabbits), and Ochotonidae ( pikas). Though they can resemble rodents, and were classified as a superfamily in that order until the early 20th century, they have since been considered a separate order. They differ from rodents in a number of physical characteristics, such as having four incisors in the upper jaw rather than two. The endangered volcano rabbit of the Trans-Mexican Volcanic Belt is the world's second smallest rabbit. In North America, pikas are not found south of southern California and northern New Mexico.

Eulipotyphlans are insectivorous mammals. Shrews and solenodons closely resemble mice, hedgehogs carry spines, while moles are stout-bodied burrowers. In the Americas, moles are not present south of the northernmost tier of Mexican states, where they are rare. 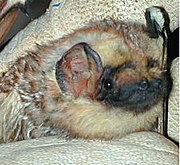 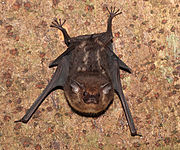 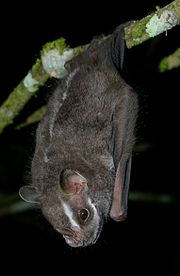 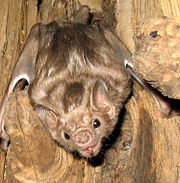 The bats' most distinguishing feature is that their forelimbs are developed as wings, making them the only mammals capable of flight. Bat species account for about 20% of all mammals.

There are over 260 species of carnivorans, the majority of which feed primarily on meat. They have a characteristic skull shape and dentition. Mexico has more native mephitids than any other country, with two thirds of extant species being present. Only Costa Rica and Panama have more procyonid species (one more) than Mexico (it is tied with Colombia in this respect). Large extinct carnivorans that lived in the area prior to the coming of humans include the saber-toothed cat Smilodon fatalis, the scimitar cat Homotherium serum, American lions, American cheetahs, dire wolves and short-faced bears.

The odd-toed ungulates are browsing and grazing mammals. They are usually large to very large, and have relatively simple stomachs and a large middle toe. Tapirids were more widespread before humans appeared, formerly being present in temperate North America as well as the tropical regions they are found in today. Native equids once lived in the region, having evolved in North America over a period of 50 million years, but died out around the time of the first arrival of humans, along with at least one ungulate of South American origin, the notoungulate Mixotoxodon. Sequencing of collagen from a fossil of one recently extinct notoungulate has indicated that this order was closer to the perissodactyls than any extant mammal order. [9]

The even-toed ungulates are ungulates whose weight is borne about equally by the third and fourth toes, rather than mostly or entirely by the third as in perissodactyls. There are about 220 noncetacean artiodactyl species, including many that are of great economic importance to humans. All of Mexico's extant ungulates are of Nearctic origin. Prior to the arrival of humans, camelids, which evolved in North America, also lived in the region, as did additional antilocaprids (e.g., Capromeryx minor).

The order Cetacea includes whales, dolphins and porpoises. They are the mammals most fully adapted to aquatic life with a spindle-shaped nearly hairless body, protected by a thick layer of blubber, and forelimbs and tail modified to provide propulsion underwater. Their closest extant relatives are the hippos, which are artiodactyls, from which cetaceans descended; cetaceans are thus also artiodactyls. Lagoons on the coast of Baja California Sur provide calving grounds for the eastern Pacific population of gray whales. The vaquita of the northern Gulf of California is the world's smallest and most endangered cetacean.