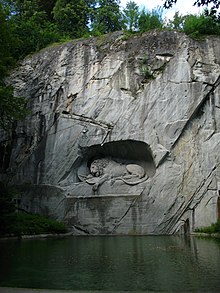 The Lion Monument, an in situ sculpture in Lucerne, Switzerland

A colossal statue is one that is more than twice life-size. [1] This is a list of colossal statues and other sculptures that were created, mostly or all carved, and remain in situ. This list includes two colossal stones that were intended to be moved. However, they were never broken free of the quarry in which they were carved, and therefore they would be considered carved in situ. Most of these were carved in ancient times.

In many cases, especially in India, these sculptures were carved out of softer rocks like sandstone or volcanic tuff. However, in some cases they were carved out of harder rocks like basalt, or even granite in the case of the unfinished obelisk in Egypt. The Egyptians may have been limited to using 4.5-kilogram (10-pound) dolerite balls to chip away at the granite. [2] Dynamite was used in the carving of Mount Rushmore, one of the few colossal sculptures that was carved out of granite.