From Wikipedia
https://en.wikipedia.org/wiki/List_of_brightest_stars
This article is about the brightness of stars as seen from Earth (apparent magnitude). For intrinsic luminosity of stars (absolute magnitude), see list of most luminous stars.
Stars sorted by apparent magnitude

This is a list of stars arranged by their apparent magnitude – their brightness as observed from Earth. It includes all stars brighter than magnitude +2.50 in visible light, measured using a V-band filter in the UBV photometric system. Stars in binary systems (or other multiples) are listed by their total or combined brightness if they appear as a single star to the naked eye, or listed separately if they do not. As with all magnitude systems in astronomy, the scale is logarithmic and inverted i.e. lower/more negative numbers are brighter.

Most stars on this list appear bright from Earth because they are nearby, not because they are intrinsically luminous. For a list which compensates for the distances, converting the apparent magnitude to the absolute magnitude, see the list of most luminous stars. 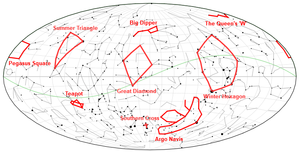 Some major asterisms, which feature many of the brightest stars in the night sky.

Any exact order of the visual brightness of stars is not perfectly defined for four reasons:

All of these stars have multiple valid names or catalogue designations. The table lists their Bayer designation and the most common proper name. Most of the proper names have been approved [6] by the Working Group on Star Names of the International Astronomical Union (IAU). Popular names which have not been approved by the IAU are omitted.

The source of magnitudes cited in this list is the linked Wikipedia articles—this basic list is a catalog of what Wikipedia itself documents. References can be found in the individual articles.