In mathematics, and more specifically in linear algebra, a linear map (also called a linear mapping, linear transformation, vector space homomorphism, or in some contexts linear function) is a mapping

between two vector spaces that preserves the operations of vector addition and scalar multiplication. The same names and the same definition are also used for the more general case of modules over a ring; see Module homomorphism.

If a linear map is a bijection then it is called a linear isomorphism. In the case where

, a linear map is called a (linear) endomorphism. Sometimes the term linear operator refers to this case, [1] but the term "linear operator" can have different meanings for different conventions: for example, it can be used to emphasize that

are real vector spaces (not necessarily with

),[ citation needed] or it can be used to emphasize that

is a function space, which is a common convention in functional analysis. [2] Sometimes the term linear function has the same meaning as linear map, while in analysis it does not.

In the language of category theory, linear maps are the morphisms of vector spaces.

be vector spaces over the same field

the following two conditions are satisfied:

By the associativity of the addition operation denoted as +, for any vectors

Thus a linear map is one which preserves linear combinations.

Denoting the zero elements of the vector spaces

respectively, it follows that

in the equation for homogeneity of degree 1:

viewed as a one-dimensional vector space over itself is called a linear functional. [6]

These statements generalize to any left-module

without modification, and to any right-module upon reversing of the scalar multiplication.

Often, a linear map is constructed by defining it on a subset of a vector space and then extending by linearity to the linear span of the domain. Suppose

are vector spaces and

is a function defined on some subset

Then a linear extension of

if it exists, is a linear map

) and takes its values from the codomain of

is a vector subspace of

is guaranteed to exist if (and only if)

has a linear extension to

then it has a linear extension to all of

can be extended to a linear map

if and only if whenever

are vectors such that

exists then the linear extension

is linearly independent then every function

(the converse is also true).

can be linearly extended from the linearly independent set of vectors

to a linear map on

is the map that sends

has a linear extension to all of

Indeed, the Hahn–Banach dominated extension theorem even guarantees that when this linear functional

is dominated by some given seminorm

) then there exists a linear extension to

that is also dominated by

are finite-dimensional vector spaces and a basis is defined for each vector space, then every linear map from

can be represented by a matrix. [11] This is useful because it allows concrete calculations. Matrices yield examples of linear maps: if

be a basis for

is uniquely determined by the coefficients

is a linear map,

be a basis for

. Then we can represent each vector

is entirely determined by the values of

. If we put these values into an

, then we can conveniently use it to compute the vector output of

for any vector in

as defined above. To define it more clearly, for some column

that corresponds to the mapping

is the matrix of

. In other words, every column

has a corresponding vector

are the elements of column

. A single linear map may be represented by many matrices. This is because the values of the elements of a matrix depend on the bases chosen.

The matrices of a linear transformation can be represented visually: 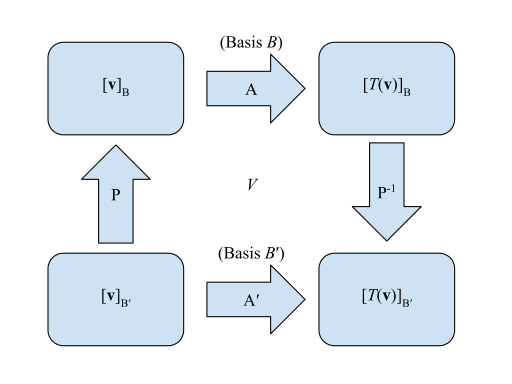 The relationship between matrices in a linear transformation

Such that starting in the bottom left corner

and looking for the bottom right corner

. The equivalent method would be the "longer" method going clockwise from the same point such that

In two- dimensional space R2 linear maps are described by 2 × 2 matrices. These are some examples:

The composition of linear maps is linear: if

are linear, then so is their composition

. It follows from this that the class of all vector spaces over a given field K, together with K-linear maps as morphisms, forms a category.

are linear, then so is their pointwise sum

, which is defined by

is an element of the ground field

of linear maps from

itself forms a vector space over

is an endomorphism of

; the set of all such endomorphisms

together with addition, composition and scalar multiplication as defined above forms an associative algebra with identity element over the field

(and in particular a ring). The multiplicative identity element of this algebra is the identity map

that is also an isomorphism is called an automorphism of

forms a group, the automorphism group of

which is denoted by

. Since the automorphisms are precisely those endomorphisms which possess inverses under composition,

is the group of units in the ring

is isomorphic to the associative algebra of all

matrices with entries in

. The automorphism group of

is isomorphic to the general linear group

invertible matrices with entries in

Kernel, image and the rank–nullity theorem

is linear, we define the kernel and the image or range of

is a subspace of

is a subspace of

. The following dimension formula is known as the rank–nullity theorem: [14]

is also called the rank of

is called the nullity of

are finite-dimensional, bases have been chosen and

is represented by the matrix

, then the rank and nullity of

are equal to the rank and nullity of the matrix

A subtler invariant of a linear transformation

is the cokernel, which is defined as

These can be interpreted thus: given a linear equation f(v) = w to solve,

: given a vector (a, b), the value of a is the obstruction to there being a solution.

An example illustrating the infinite-dimensional case is afforded by the map f: R∞ → R∞,

with b1 = 0 and bn + 1 = an for n > 0. Its image consists of all sequences with first element 0, and thus its cokernel consists of the classes of sequences with identical first element. Thus, whereas its kernel has dimension 0 (it maps only the zero sequence to the zero sequence), its co-kernel has dimension 1. Since the domain and the target space are the same, the rank and the dimension of the kernel add up to the same sum as the rank and the dimension of the co-kernel (

), but in the infinite-dimensional case it cannot be inferred that the kernel and the co-kernel of an endomorphism have the same dimension (0 ≠ 1). The reverse situation obtains for the map h: R∞ → R∞,

For a linear operator with finite-dimensional kernel and co-kernel, one may define index as:

namely the degrees of freedom minus the number of constraints.

For a transformation between finite-dimensional vector spaces, this is just the difference dim(V) − dim(W), by rank–nullity. This gives an indication of how many solutions or how many constraints one has: if mapping from a larger space to a smaller one, the map may be onto, and thus will have degrees of freedom even without constraints. Conversely, if mapping from a smaller space to a larger one, the map cannot be onto, and thus one will have constraints even without degrees of freedom.

The index of an operator is precisely the Euler characteristic of the 2-term complex 0 → V → W → 0. In operator theory, the index of Fredholm operators is an object of study, with a major result being the Atiyah–Singer index theorem. [17]

No classification of linear maps could be exhaustive. The following incomplete list enumerates some important classifications that do not require any additional structure on the vector space.

Let V and W denote vector spaces over a field F and let T: V → W be a linear map.

T is said to be injective or a monomorphism if any of the following equivalent conditions are true:

T is said to be surjective or an epimorphism if any of the following equivalent conditions are true:

T is said to be an isomorphism if it is both left- and right-invertible. This is equivalent to T being both one-to-one and onto (a bijection of sets) or also to T being both epic and monic, and so being a bimorphism.

Given a linear map which is an endomorphism whose matrix is A, in the basis B of the space it transforms vector coordinates [u] as [v] = A[u]. As vectors change with the inverse of B (vectors are contravariant) its inverse transformation is [v] = B[v'].

Substituting this in the first expression

Therefore, the matrix in the new basis is A′ = B−1AB, being B the matrix of the given basis.

An example of an unbounded, hence discontinuous, linear transformation is differentiation on the space of smooth functions equipped with the supremum norm (a function with small values can have a derivative with large values, while the derivative of 0 is 0). For a specific example, sin(nx)/n converges to 0, but its derivative cos(nx) does not, so differentiation is not continuous at 0 (and by a variation of this argument, it is not continuous anywhere).

A specific application of linear maps is for geometric transformations, such as those performed in computer graphics, where the translation, rotation and scaling of 2D or 3D objects is performed by the use of a transformation matrix. Linear mappings also are used as a mechanism for describing change: for example in calculus correspond to derivatives; or in relativity, used as a device to keep track of the local transformations of reference frames.

Another application of these transformations is in compiler optimizations of nested-loop code, and in parallelizing compiler techniques.

Wikibooks has a book on the topic of: Linear Algebra/Linear Transformations