Lincoln Center for the Performing Arts (also simply known as Lincoln Center) is a 16.3-acre (6.6-hectare) complex of buildings in the Lincoln Square neighborhood on the Upper West Side of Manhattan. [1] It has thirty indoor and outdoor facilities and is host to 5 million visitors annually. [1] It houses internationally renowned performing arts organizations including the New York Philharmonic, the Metropolitan Opera, the New York City Ballet, and the Juilliard School of Music. 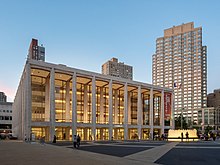 A consortium of civic leaders and others, led by and under the initiative of philanthropist John D. Rockefeller III, built Lincoln Center as part of the "Lincoln Square Renewal Project" during Robert Moses' program of New York's urban renewal in the 1950s and 1960s. [2] Respected architects were contracted to design the major buildings on the site.

Rockefeller was appointed as the Lincoln Center's inaugural president in 1956, and once he resigned, became its chairman in 1961. [3] He is credited with raising more than half of the $184.5 million in private funds needed to build the complex, including drawing from his own funds; the Rockefeller Brothers Fund also contributed to the project. [2] Numerous architects were hired to build different parts of the center (see § Architects). The center's first three buildings, David Geffen Hall (formerly Avery Fisher Hall, originally named Philharmonic Hall), David H. Koch Theater (formerly the New York State Theater), and the Metropolitan Opera House were opened in 1962, 1964, and 1966, respectively. [3]

It is unclear whether the center was named as a tribute to U.S. President Abraham Lincoln or for its location in the Lincoln Square Neighborhood. The name was bestowed on the area in 1906 by the New York City Board of Aldermen, but records give no reason for choosing that name. [4] There has long been speculation that the name came from a local landowner, because the square was previously named Lincoln Square. However, property records from the New York Municipal Archives from that time have no record of a Lincoln surname; they only list the names Johannes van Bruch, Thomas Hall, Stephen De Lancey, James De Lancey, James De Lancey Jr. and John Somerindyck. [5] One speculation is that references to President Lincoln were omitted from the records because the mayor in 1906 was George B. McClellan Jr., son of General George B. McClellan, who was general-in-chief of the Union Army early in the American Civil War and a bitter rival of Lincoln's. [6]

In 1955, the first city institution to commit to be part of the Lincoln Square Renewal Project, an effort to revitalize the city's west side with a new performing arts complex that would become the Lincoln Center for the Performing Arts, was the Fordham Law School of Fordham University. [23] In 1961, Fordham Law School was the first building to open as part of the renewal project, and in 1968, Fordham College at Lincoln Center welcomed its first students. [23]

The development of the condominium at 3 Lincoln Center, [24] completed in 1991, designed by Lee Jablin of Harman Jablin Architects, made possible the expansion of The Juilliard School and the School of American Ballet. [24] [25] [26]

The center's cultural institutions also have since made use of facilities located away from the main campus. In 2004, the center expanded through the addition of Jazz at Lincoln Center's newly built facilities, the Frederick P. Rose Hall, at the new Time Warner Center, located a few blocks to the south. [13] In March 2006, the center launched construction on a major redevelopment plan that modernized, renovated, and opened up its campus. Redevelopment was completed in 2012 with the completion of the President's Bridge over West 65th Street. [16]

When first announced in 1999, Lincoln Center's campuswide redevelopment was to cost $1.5 billion over 10 years and radically transform the campus. [27] The center management held an architectural competition, won by the British architect Norman Foster in 2005, but did not approve a full scale redesign until 2012, in part because of the need to raise $300 million in construction costs and the New York Philharmonic's fear that it might lose audiences and revenue while it was displaced. [28] [29] Among the architects that have been involved were Frank Gehry; Cooper, Robertson & Partners; Skidmore, Owings & Merrill; Beyer Blinder Belle; Fox & Fowle; Olin Partnership; and Diller & Scofidio. [30]

In March 2006, the center launched the 65th Street Project  – part of a major redevelopment plan continuing through the fall of 2012  – to create a new pedestrian promenade designed to improve accessibility and the aesthetics of that area of the campus. Additionally, Alice Tully Hall was modernized and reopened to critical and popular acclaim in 2009 and Film at Lincoln Center expanded with the new Elinor Bunin Munroe Film Center. Topped by a sloping lawn roof, the film center is part of a new pavilion that also houses a destination restaurant named Lincoln, as well as offices. Subsequent projects were added which addressed improvements to the main plazas and Columbus Avenue Grand Stairs. Under the direction of the Lincoln Center Development Project, Diller Scofidio + Renfro in association with FXFOWLE Architects and Beyer Blinder Belle Architects provided the design services. Additionally, Turner Construction Company and RCDolner, LLC [31] were the construction managers for the projects. [32] [33] Another component to redevelopment was the addition of the David Rubenstein Atrium designed by Tod Williams Billie Tsien Architects, a visitors' center and a gateway to the center that offers free performances, day-of-discount tickets, food, and free Wi-Fi.

Architects who designed buildings at the center include: 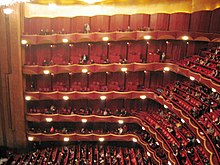 The center has 30 indoor and outdoor performance facilities including: 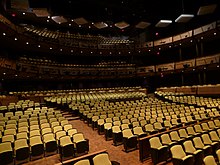 Interior of the Rose Theater

The center serves as home for twelve resident arts organizations: [49] 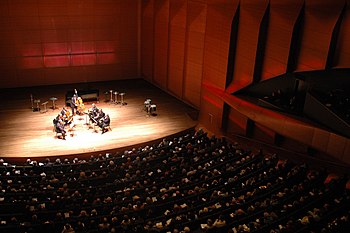 The Chamber Music Society of Lincoln Center is, along with New York Philharmonic, New York City Ballet, Lincoln Center Theater, and the Metropolitan Opera, one of the eleven constituents of the Lincoln Center for the Performing Arts. Alice Tully Hall is the venue for the CMS activities (such as performances, education programs, recording sessions, broadcast activities) since it opened in 1969. [50] [51] The co-artistic directors are David Finckel (cellist of Emerson String Quartet) and Wu Han (pianist).

In an attempt to achieve international recognition and reach, the CMS has different season projects outside the country and a nationally televised broadcast, international radio series, regular broadcasts on SiriusXM and the possibility to enjoy live streamed performances on the CMS website. [52]

Lincoln Center for the Performing Arts

Lincoln Center for the Performing Arts (LCPA) is one of the twelve resident organizations, and serves as presenter of artistic programming, leader in arts and education and community relations, and manager of the center's campus. LCPA has some 5,000 programs, initiatives, and events annually, and its programs include American Songbook, Great Performers, Lincoln Center Festival, Lincoln Center Out of Doors, Midsummer Night Swing, the Mostly Mozart Festival, Target Free Thursdays, the White Light Festival and the Emmy Award–winning Live from Lincoln Center. [49] [53]

In July 2006, the LCPA announced it would join with publishing company John Wiley & Sons to publish at least 15 books on performing arts, and would draw on the Lincoln Center Institute's educational background and archives. [54]

In 1987, Classical Jazz had their first jazz concert series and jazz division was created with Wynton Marsalis. He was the artistic director of JALC and also the music director of the Lincoln Center Jazz Orchestra in 1996. [55] This ensemble performs classic jazz works as well as premiere new pieces. The orchestra performed many new compositions from composers such as Benny Carter, Benny Golson, Geri Allen, Marcus Roberts, Melba Liston, and John Lewis. [56] There are performances from jazz musicians like Duke Ellington, Count Basie, Fletcher Henderson, Thelonious Monk, Mary Lou Williams, Dizzy Gillespie, and Charles Mingus. [56]

The LCJO (Lincoln Center Jazz Orchestra) first toured in Europe during 1995, then to Russia, China, Taiwan, Japan and Australasia. In early 2000, there was a United States tour for a program of jazz and dance. [56]

Lincoln Center Cultural Innovation Fund is the first of its kind as a grant program that seeks to make the arts accessible to all people, focusing on those who live in some of New York City's poorest neighborhoods. [57] Partnering with the Rockefeller Foundation, the new pilot grant program offers one-time grants to non-profit organizations to provide cultural activities in these communities in the diverse neighborhoods of Central Brooklyn and the South Bronx. [58] Each of the 12 grantees will receive support and financial backing for their project based on organizational budget size. These are one-year long projects, and grant amounts range from $50,000-$100,000. [58] The over-all goal of the program is to support non-profit organizations in creating cultural innovative strategies that cultivate participation in the arts as well as increase the range and availability of cultural activities to underserved communities. [59]

Lincoln Center is featured in multiple works of art and media. Examples include: