From Wikipedia, the free encyclopedia
Swelling of the root which protects against fire and other hazards 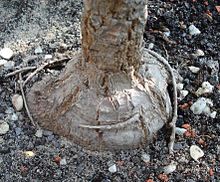 Camphor trees at the Vergelegen Estate

A lignotuber is a woody swelling of the root crown possessed by some plants as a protection against destruction of the plant stem, such as by fire. [1] Other woody plants may develop basal burls as a similar survival strategy, often as a response to coppicing or other environmental stressors. However, lignotubers are specifically part of the normal course of development of the plants that possess them, and often develop early on in growth. [2] The crown contains buds from which new stems may sprout, as well as stores of starch that can support a period of growth in the absence of photosynthesis. The term "lignotuber" was coined in 1924 by Australian botanist Leslie R. Kerr.[ citation needed]

Plants possessing lignotubers include many species in Australia: Eucalyptus marginata (Jarrah), Eucalyptus brevifolia (snappy gum) and Eucalyptus ficifolia (scarlet gum) all of which can have lignotubers ten feet (3 m) wide and three feet (1 m) deep, as well as most mallees (where it is also known as a mallee root [3]) and many Banksia species.

Plants possessing lignotubers on the western coast of the USA include California buckeye, coast redwood, California bay laurel (aka Oregon myrtle), and multiple species of manzanita and ceanothus. [2]

At least 14 species in the Mediterranean region have been identified as having lignotubers (as of 1993). Lignotubers develop from the cotyledonary bud in seedlings of several oak species including cork oak Quercus suber, but do not develop in several other oak species, and are not apparent in mature cork oak trees. [4]

The largest known lignotubers (also called "root collar burls") are those of the Coast Redwood ( Sequoia sempervirens) of central and northern California and extreme southwestern Oregon. A lignotuber washed into Big Lagoon, California, by the full gale storm of 1977 was 41 feet (12 m) in diameter and about half as tall and estimated to weigh 525 short tons (476 t). [5] The largest dicot lignotubers are those of the Chinese Camphor Tree, or Kusu ( Cinnamomum camphora) of Japan, China and the Koreas. Ones at the Vergelegen Estate in Cape Town, South Africa, which were planted in the late 1600s have muffin-shaped lignotubers up to six feet (2 m) high and about 30 feet (9 m) in diameter. [6] [7] Perhaps the largest lignotuber in Australia would be that of "Old Bottle Butt", a Red Bloodwood Tree ( Corymbia gummifera) near Wauchope, New South Wales, that has a lignotuber about 8 feet (2.4 m) in height and 17 feet (5.2 m) in circumference at breast height. [8]

Many plants with lignotubers grow in a shrubby habit, but with multiple stems arising from the lignotuber. The term lignotuberous shrub is used to describe this habit.[ citation needed]