He was born in Ghent. [1] Lieven van Lathem worked for a range of patrons including the dukes of Burgundy, Philip the Good, and Charles the Bold. A member of the painters' guilds in Ghent and Antwerp, van Lathem worked with other contemporary Flemish illuminators, including the Master of Mary of Burgundy and Nicolas Spierinc. He was influenced by the Netherlandish panel painters Jan van Eyck and Dieric Bouts. Like many artists working at fifteenth-century courts, van Lathem worked in more than one medium. He helped prepare decorations for an assembly of the Order of the Golden Fleece and for the wedding festivities celebrating the marriage of Charles the Bold to Margaret of York held in Bruges in 1468. [2] He contributed to the Hours of Mary of Burgundy. 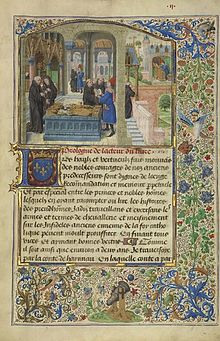 The Author Hears the Story of Gillion de Trazegnies, by calligrapher David Aubert; the painting is by Lathem

Though van Lathem is known for oil paintings as well as manuscripts, no paintings are currently attributed to him. [1] His son Jacob van Lathem became a painter and his son Lieven the Younger became a goldsmith. [1] Lieven van Lathem died in Antwerp in 1493.