listen)) is the capital and largest city of the province of Flemish Brabant in the Flemish Region of Belgium. It is located about 25 kilometres (16 miles) east of Brussels. The municipality itself comprises the historic city and the former neighbouring municipalities of Heverlee, Kessel-Lo, a part of Korbeek-Lo, Wilsele and Wijgmaal. It is the eighth largest city in Belgium, with more than 100,244 inhabitants. [2]

KU Leuven, Belgium's largest university, has its flagship campus in Leuven, which has been a university city since 1425. [3] This makes it the oldest university city in the Low Countries. The city is home of the headquarters of Anheuser-Busch InBev, the world's largest beer brewer [4] and sixth-largest fast-moving consumer goods company. [5] 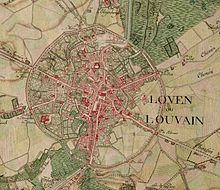 The earliest mention of Leuven (Loven) dates from 891, when a Viking army was defeated by the Frankish king Arnulf of Carinthia (see: Battle of Leuven). According to a legend, the city's red and white arms depict the blood-stained shores of the river Dyle after this battle, similarly to the flag of Austria.

Situated beside this river, and near to the stronghold of the Dukes of Brabant, Leuven became the most important centre of trade in the duchy between the 11th and 14th centuries. A token of its former importance as a centre of cloth manufacture is shown in that ordinary linen cloth was known, in late-14th-century and 15th-century texts, as lewyn (other spellings: Leuwyn, Levyne, Lewan(e), Lovanium, Louvain). [6]

In the 15th century, a new golden era began with the founding of the predecessor of what is now the largest and oldest university in the Low Countries, the University of Leuven, in 1425. [7] Prestigious buildings like the Town Hall and the Saint Peter's Church (itself designated a UNESCO World Heritage Site in 1999) were constructed. The art of painting flourished with painters such as Dirk Bouts, Albrecht Bouts and Jan Rombouts the Elder. The painter Quinten Metsys was born and trained in Leuven.

By the turn of the 16th century, Leuven had become a major European center for art and knowledge with humanists like Erasmus and Hieronymus van Busleyden working there. In 1517 the latter founded the Collegium Trilingue in which the three ancient languages: Latin, Greek and Hebrew were taught. It promoted the critical study of classical literature and the Bible. Thomas More published his Utopia at Dirk Martens printing house in Leuven in 1516. Gemma Frisius laid the foundation for modern triangulation methods and cartography. He further made important contributions to mathematics, geography and astronomy. Gerardus Mercator and John Dee were among his students. Leuven became a leading centre for the fabrication of precision astronomical instruments, such as the planetaria and the terrestrial and celestial globes built by Gaspard van der Heyden and Gualterus Arsenius. Andreas Vesalius completed his medicine studies in Leuven, before moving to Padova and Basel. Religious persecutions of Protestants, followed by greater religious and political turmoil starting in the late 1560s, greatly affected intellectual life in Leuven. Many professors and alumni from Leuven moved abroad. The newly founded University of Leiden in Holland, amongst others, would profit greatly from this brain drain. Despite this the university continued to excel in disciplines like theology with Johannes Molanus and classical studies with Justus Lipsius. 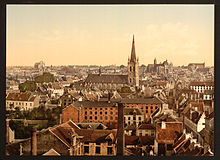 In the 18th century, the brewery Den Horn (meaning "the horn") flourished. In 1708, Sebastien Artois became the master brewer at Den Horn, and gave his name to the brewery in 1717, now part of AB InBev, whose flagship beer, Stella Artois, is brewed in Leuven and sold in many countries.

Leuven developed considerably during the 19th century. Dozens of squares were created, including the Sint-Jacobsplein, the Volksplaats (today's Ladeuzeplein) and the Statieplein (today's Martelarenplein). [8] From 1835, the streets of the city were lit with gas. [9] The Voer stream was vaulted, the channels occupying the middle of the streets were removed, a number of narrow streets were widened or simply destroyed and a considerable number of sewers were installed. The municipal theatre and the main post office were built, respectively in 1866 and between 1893 and 1895. [10] It was also at this time that the central prison was built.

Leuven has several times been besieged or occupied by foreign armies; these include the Battle of Leuven (891), the Siege of Leuven (1635) and the Battle of Leuven (1831). In the 20th century, both world wars inflicted major damage upon the city. Upon Germany's entry into World War I, the town was heavily damaged by rampaging soldiers. [11] In all, about 300 civilians died. [12] The university library was destroyed on 25 August 1914, using petrol and incendiary pastilles. [13] [14] 230,000 volumes were lost in the destruction, including Gothic and Renaissance manuscripts, a collection of 750 medieval manuscripts, and more than 1,000 incunabula (books printed before 1501). [14] [15] The destruction of the library shocked the world, with the Daily Chronicle describing it as war not only against civilians but also against "posterity to the utmost generation." [16] The burning of the city was done as a reprisal, which at the time was legal under international law, as the Germans alleged that Belgian civilians had taken part in the fighting and killed German troops. [17] [18] The library was rebuilt after the war, and much of the collection was replaced. Great Britain (on the initiative of the John Rylands Library in Manchester) and the United States were major providers of material for the replenishment of the collection. [12] The new library building was financed by the National Committee of the United States for the Restoration of the University of Louvain and built to the design of architect Whitney Warren; it was officially opened on 4 July 1928. [19] Richard Harding Davis, a war correspondent for the New York Tribune, was in Leuven and wrote a column titled "The Germans Were Like Men After an Orgy" in which he described the organized civilian murders and vandalism committed by the occupying troops. [20]

In World War II, after the start of the German offensive, Leuven formed part of the British Expeditionary Force's front line and was defended by units of the 3rd Division and Belgian troops. From 14 to 16 May 1940, the German Army Group B assaulted the city with heavy air and artillery support. The British withdrew their forces to the River Senne on the night of 16 May and the town was occupied the next day. [21] The new university library building was set on fire by shelling, on 16 May, and nearly a million books were lost. [22]

Given the presence of the KU Leuven, Europe's most innovative university according to Reuters, [24] much of the local economy is concentrated on spin-offs from academic research. In addition, the Leuven-based research centre, IMEC, is a research centre in the field of nano-electronics and digital technologies. As a result, dozens of companies in high technological fields such as biotech, robotics, additive manufacturing and IT, are located near these research institutes on the Arenberg Science Park and Haasrode Research-Park. Quite a few international companies such as Siemens, [25] Huawei, [26] Nitto Denko, JSR Corporation or Commscope have important, often research oriented branches, in Leuven. The academic hospital UZ Leuven, first in Europe regarding the number of clinical tests per capita and approval rates for clinical trials, UZ Leuven is another advanced research institute. It is one of Europe's largest academic hospitals. As a result, large numbers of private service providers are active in the medical, financial and legal fields.

Because it is the capital of the province of Flemish Brabant, many governmental institutions are located in Leuven, as well as the regional headquarters of transport corporations such as De Lijn. As one of Flanders Art-Cities, [27] with a large range of cafés, restaurants, cultural institutions and shopping neighbourhoods, Leuven also attracts a growing number of tourists.

Leuven is the worldwide headquarters of Anheuser-Busch InBev, the largest beer company in the world and is considered one of the largest fast-moving consumer goods (FMCG) companies in the world. InBev's Stella Artois brewery and main offices dominate the entire north-eastern part of the town, between the railway station and the canal to Mechelen. Finally, Leuven is the ancestral home of the KBC Group. KBC is one of the leading financial groups in Europe. It is a multi-channel bank-insurance group, with a geographic focus on Belgium and Central Europe, catering mainly to retail clients, SMEs and local midcaps. As one of the largest companies in Belgium and it has its insurance and auto lease HQ in Leuven.

Leuven has a large international student population, mainly concentrated around the city centre. The Katholieke Universiteit Leuven ( KU Leuven; University of Leuven) has two campuses in the city, with a total of more than 45,000 students as of January 2020. [28] It is the oldest Catholic university still in existence in the world, and the largest university in Belgium. There are also a number of hogescholen (universities of applied sciences), such as the UC Leuven-Limburg (UCLL).

Within the city and its immediate surroundings, most distances can be covered on foot or with a bicycle. Several streets are off-limits to vehicle traffic and, within the city centre, road speed regulations prescribe 30 km/h (19 mph) as the maximum speed limit, making it a pedestrian and bicycle-friendly city. There are also a few car parking lots.

There are numerous buses, primarily operated by the public transport company De Lijn, that connect the city with the region while providing travel options within the city centre. The so-called Ringbus follows the ring road of the city. Buses 616, 652 and 651 connect Leuven with Brussels Airport.

One of Belgium's conservatories is based in Leuven: the Lemmens Institute, which is described as "Faculty of Music, Performing Arts and Education". It is known for its music therapy education and its wordart-drama education. Kunstencentrum STUK is a cultural centre and venue in the city center for music, theatre, sound art, and dance. Leuven holds a summer rock festival, Marktrock. Leuven has some university orchestras, such as the University Symphony Orchestra [ nl] (USO), [30] the University Symphonic Band [ nl] (UGO). [31] and the Arenberg Orchestra [ nl]. [32] [33]

In September 2009, the M – Museum Leuven opened in Leuven. It is a museum for both contemporary and historical art, located near het Ladeuzeplein. It has hosted exhibitions by international artists such as Angus Fairhurst, Sol LeWitt, Roe Ethridge and Charles Burns as well as Belgian artists such as Ilse D'Hollander, Jan Vercruysse, Antoon Van Dyck and Freek Wambacq.

Leuven has a rich beer culture, being the birthplace of several beers such as Stella Artois, [7] Leuvense Tripel, Domus [7] and Keizersberg. It has several bars priding themselves in offering a wide variety of local and international beers, including a bar that claims to offer more than 3000 different beers.

The Higher Institute of Philosophy holds the archives of the German philosopher Edmund Husserl.

Leuven was voted European City of Sport for 2021, highlighted by hosting the UCI Road World Championships, which will follow several routes of the Grote Prijs Jef Scherens, a yearly cycling race in and around Leuven. The city also hosts the start of the Brabantse Pijl, a semi-classic race and the Cyclocross Leuven is a cyclo-cross race held each year in January.

The main football club of the municipality is Oud-Heverlee Leuven, successor of prior clubs Daring Club Leuven and Stade Leuven. Both the men's team and OH Leuven women play at the highest level. The city's prime basketball team is the Leuven Bears, they play their home games at the SportOase. Other known top-tier teams include IHC Leuven (ice hockey), KHC Leuven (field hockey) and VC Haasrode-Leuven (volleyball). Daring Club Leuven Atletiek is one of the oldest athletics clubs in Belgium, where 1964 Olympic gold medallist Gaston Roelants was a member. 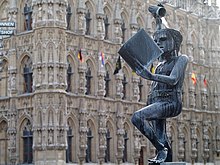 The Old University of Leuven used to have 40 constituent colleges and 4 pedagogies, some of which are still being used by KU Leuven. The most notable ones are:

Leuven is twinned with:

Aside from the aforementioned cities, Leuven has friendly relations with:

Leuven has an 'adoptive village'

See also: Bibliography of the history of Leuven

Wikivoyage has a travel guide for Leuven.
Retrieved from " https://en.wikipedia.org/?title=Leuven&oldid=1136283465"
Categories:
Hidden categories: