The lesser mouse-deer, lesser Malay chevrotain, or kanchil (Tragulus kanchil) is a species of even-toed ungulate in the family Tragulidae.

It is one of the smallest known hoofed mammals, its mature size being as little as 45 cm (18 inches) and 2 kg (4.4 lb) and related to the even smaller Java mouse-deer. It is threatened by predation by feral dogs. 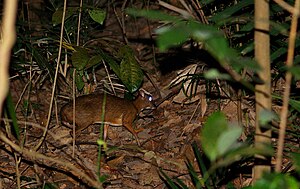 Through further research it is also discovered that the creatures who were initially believed to be nocturnal actually conduct their activities during the day. As discovered by Kusuda, the first being that though many births occur in May, November or December, the females are able to reproduce throughout the year (Kusuda et al).

In an Indonesian and Malaysian folklore, the mouse-deer Sang Kancil is a cunning trickster similar to Br'er Rabbit from the Uncle Remus tales, even sharing some story plots, like when they both trick enemies pretending to be dead or inanimate, [2] [3] or lose a race to slower opponents. [4] [5]