From Wikipedia, the free encyclopedia
(Redirected from Latin American)
Citizens of the Latin American countries
For the pan-ethnic demographic group in the United States, see Hispanic and Latino Americans.

Latin Americans ( Spanish: Latinoamericanos; Portuguese: Latino-americanos; French: Latino-américains) are the citizens of Latin American countries (or people with cultural, ancestral or national origins in Latin America). Latin American countries and their diasporas are multi-ethnic and multi-racial. Latin Americans are a pan-ethnicity consisting of people of different ethnic and national backgrounds. As a result, some Latin Americans do not take their nationality as an ethnicity, but identify themselves with a combination of their nationality, ethnicity and their ancestral origins. [18] Aside from the Indigenous Amerindian population, all Latin Americans have some Old World ancestors who arrived since 1492. Latin America has the largest diasporas of Spaniards, Portuguese, Africans, Italians, Lebanese and Japanese in the world. [19] [20] [21] The region also has large German (second largest after the United States), [22] French, Palestinian (largest outside the Arab states), [23] Chinese and Jewish diasporas.

The specific ethnic and/or racial composition varies from country to country and diaspora community to diaspora community: many have a predominance of mixed Amerindian and European descent or mestizo, population; in others, Amerindians are a majority; some are mostly inhabited by people of European ancestry; others are primarily mulatto. [18] [24] The largest single group are white Latin Americans. [18] Together with the people of part European ancestry, they combine for almost the totality of the population. [18]

Latin Americans and their descendants can be found almost everywhere in the world, particularly in densely populated urban areas. The most important migratory destinations for Latin Americans are found in the United States, Spain, France, Canada and Italy. 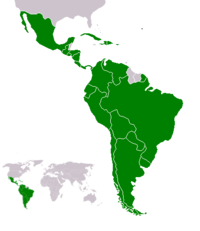 Latin America ( Spanish: América Latina or Latinoamérica; Portuguese: América Latina; French: Amérique latine) is the region of the Americas where Romance languages (i.e., those derived from Latin)—particularly Spanish and Portuguese, as well as French—are primarily spoken. [25] [26]

It includes 21 countries or territories: Mexico in North America; Guatemala, Honduras, El Salvador, Nicaragua, Costa Rica and Panama in Central America; Colombia, Venezuela, Ecuador, Peru, Bolivia, Brazil, Paraguay, Chile, Argentina and Uruguay in South America; and Cuba, Haiti, the Dominican Republic and Puerto Rico in the Caribbean—in summary, Hispanic America, plus Brazil and Haiti. Canada and the United States, despite having a sizeable Romance-speaking communities, are almost never included in the definition, primarily for being predominantly English-speaking Anglosphere countries.

Latin America, therefore, can be defined as all those parts of the Americas that were once part of the Spanish, Portuguese or French colonial empires, [27] namely Spanish America, Colonial Brazil and New France. 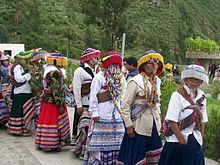 Wititi dancers from Colca Canyon, Peru. Indigenous people make up most of the population in Bolivia and Guatemala, and almost half in Peru 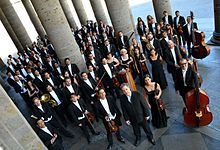 Mexican musicians from the Jalisco Philharmonic Orchestra. Mestizos and castizos comprise the majority of Mexicans 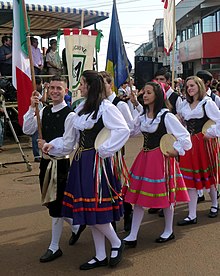 Italian Argentine youths in Oberá. Over 60% of Argentina's population has some degree of Italian ancestry. [28] [29] 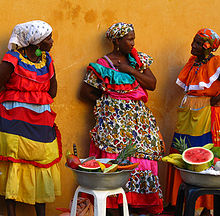 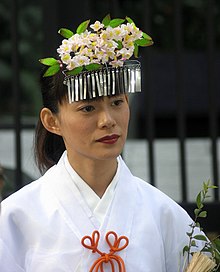 Woman from Curitiba, one of over a million Japanese Brazilians.

The population of Latin America comprises a variety of ancestries, ethnic groups and races, making the region one of the most diverse in the world. The specific composition varies from country to country: many have a predominance of European-Amerindian, or mestizo, population; in others, Amerindian are a majority; some are dominated by inhabitants of European ancestry; and some countries' populations are primarily mulatto. Black, Asian, and zambo (mixed black and Amerindian) minorities are also identified regularly. White Latin Americans are the largest single group, accounting for more than one-third of the population. [18] [30]

Racial groups according to self-identification

The Latinobarómetro surveys have asked respondents in 18 Latin American countries what race they considered themselves to belong to. The figures shown below are averages for 2007 through 2011. [53] 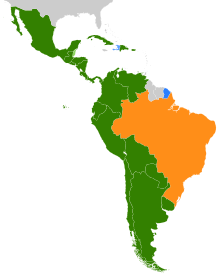 Linguistic map of Latin America. Spanish in green, Portuguese in orange, and French in blue.

Spanish and Portuguese are the predominant languages of Latin America. Spanish is the official language of most of the countries on the Latin American mainland, as well as in Puerto Rico (where it is co-official with English), Cuba and the Dominican Republic. Portuguese is spoken only in Brazil, the biggest and most populous country in the region. French is spoken in Haiti, as well as in the French overseas departments of French Guiana in South America and Guadeloupe and Martinique in the Caribbean. Dutch is the official language of some Caribbean islands and in Suriname on the continent; however, as Dutch is a Germanic language, these territories are not considered part of Latin America.

Amerindian languages are widely spoken in Peru, Guatemala, Bolivia and Paraguay, and, to a lesser degree, in Mexico, Chile and Ecuador. In Latin American countries not named above, the population of speakers of indigenous languages is small or non-existent.

In Peru, Quechua is an official language, alongside Spanish and any other indigenous language in the areas where they predominate. In Ecuador, while holding no official status, the closely related Quichua is a recognized language of the indigenous people under the country's constitution; however, it is only spoken by a few groups in the country's highlands. In Bolivia, Aymara, Quechua and Guaraní hold official status alongside Spanish. Guarani is, along with Spanish, an official language of Paraguay, and is spoken by a majority of the population (who are, for the most part, bilingual), and it is co-official with Spanish in the Argentine province of Corrientes. In Nicaragua, Spanish is the official language, but, on the country's Caribbean coast English and indigenous languages such as Miskito, Sumo, and Rama also hold official status. Colombia recognizes all indigenous languages spoken within its territory as official, though fewer than 1% of its population are native speakers of these. Nahuatl is one of the 62 native languages spoken by indigenous people in Mexico that are officially recognized by the government as "national languages" along with Spanish.

Other European languages spoken in Latin America include: English, by some groups in Argentina, Chile, Costa Rica, Nicaragua, Panama and Puerto Rico, as well as in nearby countries that may or may not be considered Latin American, such as Belize and Guyana; English is also used as a major foreign language in Latin American commerce and education. Other languages spoken in parts of Latin America include German in southern Brazil, southern Chile, Argentina, portions of northern Venezuela and Paraguay; Italian in Brazil, Argentina, Uruguay and Venezuela; Polish, Ukrainian and Russian in southern Brazil; and Welsh [54] [55] [56] [57] [58] [59] in southern Argentina. Hebrew and Yiddish are used by Jewish diasporas in Argentina and Brazil.

In several nations, especially in the Caribbean region, creole languages are spoken. The most widely spoken creole language in the Caribbean and Latin America in general is Haitian Creole, the predominant language of Haiti; it is derived primarily from French and certain West African tongues with Amerindian, English, Portuguese and Spanish influences as well. Creole languages of mainland Latin America, similarly, are derived from European languages and various African tongues.

Procession of Our Lord and the Virgin of the Miracle in Salta city.

The vast majority of Latin Americans are Christians (90%), [60] mostly Roman Catholics. [61] About 71% of the Latin American population consider themselves Catholic. [62] Membership in Protestant denominations is increasing, particularly in Brazil, Guatemala and Puerto Rico. Argentina hosts the largest communities of both Jews [63] [64] [65] and Muslims [66] [67] [68] in Latin America. Indigenous religions and rituals are practiced in countries with large Amerindian populations, especially Bolivia, Guatemala, Mexico and Peru, and Afro-Latin American religions such as Santería, Candomblé, Umbanda, Macumba and Vodou are practiced in countries with large Afro-Latin American populations, especially Cuba, Brazil, Dominican Republic and Haiti. Latin America constitutes, in absolute terms, the world's second largest Christian population, after Europe. [69]

As of 2006, Costa Rica and Chile were the only two countries with global positive migration rates. [85]