From Wikipedia
https://en.wikipedia.org/wiki/Lapidarium
For a gem artisan, see lapidary. For other uses, see Lapidarium (disambiguation). 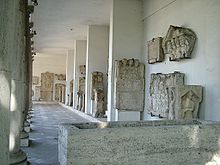 The lapidarium section in the Aquincum Museum, Budapest, Hungary

Lapidarium with epitaphs in the Schottenstift (Scottish Abbey), Vienna

A lapidarium is a place where stone (Latin: lapis) monuments and fragments of archaeological interest are exhibited.

They can include stone epigraphs; statues; architectural elements such as columns, cornices, and acroterions; bas reliefs, tombstones; and sarcophagi.

Such collections are often displayed in the outdoor courtyards of archaeology museums and history museums.

A lapidary museum could either be a lapidarium or – less often – a gem museum (e.g. the Mineral and Lapidary Museum, North Carolina).