From Wikipedia
(Redirected from Löwenmensch figurine)
https://en.wikipedia.org/wiki/Löwenmensch_figurine
Prehistoric ivory sculpture discovered in the Hohlenstein-Stadel, a cave in Germany
This article is about the prehistoric sculpture. For other uses, see Lion man.

The Löwenmensch figurine after restoration in 2013 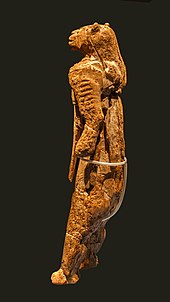 Side view showing the transverse gouges on the left arm

Determined by carbon dating of the layer in which it was found to be between 35,000 and 40,000 years old, it is one of the oldest-known examples of an artistic representation and the oldest confirmed statue ever discovered. [1] Its age associates it with the archaeological Aurignacian culture of the Upper Paleolithic. [2] An example of zoomorphic art, it was carved out of mammoth ivory using a flint stone knife. Seven parallel, transverse, carved gouges are on the left arm.

Systematic excavations at Hohlenstein-Stadel cave began in 1937 under the direction of historian Robert Wetzel. [3] The discovery of a fragmented mammoth ivory figurine was made on 25 August 1939 by geologist Otto Völzing. [4] The start of World War II just one week later meant that the fieldwork was left incomplete and analysis of the finds was not undertaken. The excavation trenches were back-filled with the same soil in which the ivory had been found. [5] For approximately thirty years, the fragments lay forgotten at the nearby Museum Ulm. It was not until archaeologist Joachim Hahn started an inventory and assembly of more than 200 fragments that a figurine with animal and human features began to emerge. [5]

Wetzel continued to spend summers digging at the site until 1961, [6] and further finds of ivory were made on the cave floor in the 1970s. In 1982, paleontologist Elisabeth Schmid combined the new fragments with Hahn's reconstruction, correcting some errors and adding pieces of the nose and mouth that emphasized the figurine's feline characteristics. [5] [a]

In 1987, a comprehensive restoration began in the workshops of the Landesmuseum Württemberg by Ute Wolf in cooperation with Schmid. During the work, which took more than six months, it was realized that the figurine was only about two-thirds complete. The back was severely damaged and the legs were missing some ivory lamellae. The ears, eye-holes, two-thirds of the mouth and nose, and the back of the head were preserved. To fill gaps in the head and body a reversible substance consisting of a mixture of beeswax, artificial wax, and chalk was used. [9]

From 2008, further excavations were carried out in the cave. All layers were sifted systematically, which led to many minute fragments being discovered. The first new adjustments were simulated virtually so that fragments could be added without having to disassemble the original recreation. [10] [b]

In 2012, a second restoration was begun in the workshops of the State Office for the Preservation of Historical Monuments in Esslingen under the leadership of Nicole Ebinger-Rist. The figurine was disassembled into its individual parts and newly discovered fragments were added along with the old ones, allowing further completion of areas of the head, back, and right side of the body, and artificial additions used during the first restoration were discarded. [12] The Löwenmensch figurine grew in height from 296 to 311 millimetres. [13] Work was completed in late 2013. [12]

Some researchers have ascribed sexual characteristics to the object. Initially, the figurine was classified as male by Hahn who suggested a plate on the abdomen could be a flaccid penis. Schmid later classified this feature as a pubic triangle; [4] however, from examination of new parts of the sculpture, she proposed that the figurine was that of a woman with the head of a Höhlenlöwin (female European cave lion). [14] [15] Male European cave lions often lacked distinctive manes, so the absence of a mane could not determine categorically that the figurine was that of a lioness, and a debate about its sex ensued among some involved in the research and the popular press. Kurt Wehrberger, of the Museum Ulm, stated that the statue had become an "icon of the feminist movement". [4]

After the 2012–2013 restoration it was realized that the triangular platelet in the genital area was processed all around, separating it from the figurine. A fracture point suggests that originally it may have been square in shape, which most commonly could be interpreted as a stylized male sex organ. [16] Debate continues, even though an objective determination of the sex of the Löwenmensch figurine may be impossible.

The Löwenmensch figurine lay in a chamber almost 30 metres (98 ft) from the entrance of the Stadel cave, accompanied by many other objects. Bone tools and worked antlers were found, along with jewellery consisting of pendants, beads, and perforated animal teeth. The chamber was probably a special place, possibly used as a storehouse, hiding-place, or maybe as an area for cultic rituals. [17]

A similar but smaller lion-headed human figurine was found in Hohle Fels. [18] Archaeologist Nicholas Conard suggested that "the occupants of Hohle Fels in the Ach Valley and Hohlenstein-Stadel in the Lone Valley must have been members of the same cultural group and shared beliefs and practices connected with therianthropic images of felids and humans" and that "the discovery of a second Löwenmensch lends support to the hypothesis that Aurignacian people practised a form of shamanism." [18]

The figurine shares certain similarities with later French cave paintings, which also show hybrid creatures with human-like lower bodies and animal heads, such as the " Sorcerer" from the Trois Frères in the Pyrenees or the " Bison-man" from the Grotte de Gabillou in the Dordogne. [19] [20]

The carving of the figurine from hard mammoth tusk would have been a complex and time-consuming task. [c] A similarly sized tusk found in the same cave has marks that "indicate that the skin and thin bone around the tooth cavity of the upper jaw were cut through to the surface of the tooth, which was then exposed for detachment with a hammer. The tip was harder and had to be removed by wedging and splitting." [22]

Wulf Hein and Kurt Wehrberger conducted an experimental replication with the kinds of stone tool available at the time. Removing the base of the tusk took ten hours. The body was carved with a steep-fronted scraper; the burins requiring regular resharpening. Several different tools were needed to separate the torso from the insides of the arms while shaping the head and shoulders, which involved difficult cutting across the grain of the ivory, often required two hands on the tool. The basic shaping took around 200 hours, and in total the recreation took more than 370 hours. [d] Jill Cook, Curator of Palaeolithic collections at the British Museum, suggests that "unless the sculpture was created slowly at odd moments over several months, someone as skilled as an artist may have been excused from other subsistence tasks to work specially on this piece." [22]

... so why would a community living on the edge of subsistence, whose primary concerns were finding food, keeping that fire going, protecting children from predators, allow someone to spend so much time away from those tasks? [23]

She replied that it was about

... a relationship to things unseen, to the vital forces of nature, that you need to perhaps propitiate, perhaps connect to, in order to ensure your successful life. [23]