Klamath County ( /ˈklæməθ/ KLAM-əth) is one of the 36 counties in the U.S. state of Oregon. As of the 2020 census, the population was 69,413. [1] The county seat is Klamath Falls. [2] The county was named for the Klamath, [3] the tribe of Native Americans living in the area at the time the first European explorers entered the region. Klamath County comprises the Klamath Falls, OR Micropolitan Statistical Area.

The Klamath or Clamitte tribe of Indians, for which Klamath County was named, are the descendants of varying cultures of indigenous peoples, who have lived in the area for more than 10,000 years.

When European-Americans began to travel through the area in 1846 along the Applegate Trail, they competed with the Klamath for game and water, which precipitated clashes between the peoples. This was exacerbated by European-American settlers, who cleared the land to farm and encroached on hunting territory. They were successful in demanding the removal of American Indians to reservations.

The Modoc people, having been removed to Oregon to share a reservation with the Klamath, traditional rivals, wanted a reservation created on Lost River, near present-day Merrill, Oregon. Captain Jack led his band back to Lost River, but the US Army, accompanied by militia and citizens of Linkville (present-day Klamath Falls) arrived and convinced Captain Jack to return. An argument broke out, shots were fired, and the Modoc War began as the Modoc fled to Captain Jack's Stronghold in northern California.

A treaty was signed with the Klamath on October 14, 1864, which led to the establishment of the Klamath Reservation. At various times over the next 40 years, different individuals of the Modoc tribe were settled within the reservation.

Because of the extensive tracts of forest, the Klamath were very well off as a people until the termination of the reservation by the U.S. government in 1954. Termination parceled the communally managed land into individual sections, which tribe members could not manage on their own and were largely forced to sell to speculators.

A few of the Klamath refused to accept the buyout money, most notably Edison Chiloquin (1924–2003). Instead of cash, he insisted on receiving the title to ancestral land along the Sprague River where he lived. On December 5, 1980, the Chiloquin Act was signed into law, giving him title to the properties he wanted. [4] 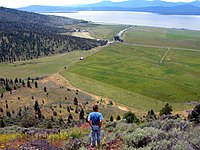 A panoramic view of Klamath County, Oregon, with Klamath Lake in the background

Like most of southwestern Oregon, Klamath County is a Republican stronghold. The county has reliably given a majority of its votes to Republican politicians for years; the last time a Democratic candidate for US president carried Klamath County was in 1964, when Lyndon Johnson won by a landslide nationwide against Barry Goldwater — but only by three percentage points in Klamath County.

Historically, Klamath County's economy was based on timber and agriculture, and although these natural resource industries now contribute only a small fraction to the region's current economic activity and employment, their legacy lives on in local politics, community identity, and landscape. Euro-American settlement in the area was spurred in the early 20th century with the coming of the railroad. In addition, the government-subsidized federal reclamation project, the Klamath Irrigation Project, dammed upper tributaries and drained much of the 128 square miles (331.5 km2) Lower Klamath and Tule lakes to convert 188,000 acres (760 km2) of former lakebed and wetlands into farmland, to be supported by irrigation.

Today the Sky Lakes Medical Center is the largest employer in the area, followed by Klamath County School District and Jeld-Wen, a manufacturer of doors and windows. The area is currently experiencing a boom in housing construction, as its proximity to California brings waves of retirees from population centers to the south. Outdoor recreation, such as hiking, hunting, and world-class trout fishing, as well as Oregon's only National Park at Crater Lake, contribute to the economy of the area. A complex of six National Wildlife Refuges— Klamath Basin National Wildlife Refuges Complex—seasonally draw some of the largest concentrations of waterfowl in North America. The area is world-renowned as a birdwatcher's paradise. Natural geothermal hot wells provide heat for many homes, businesses, and the Oregon Institute of Technology campus. The full potential of this energy resource continues to be studied.