From Wikipedia, the free encyclopedia
Energy of a moving physical body 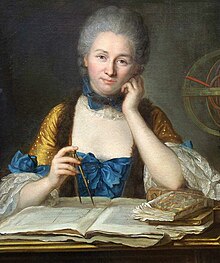 Émilie du Châtelet (1706–1749) with a pair of compasses in her right hand. She was the first to publish the relation for kinetic energy

. This means that an object with twice the speed hits four times – 2×2 – harder. (Portrait by Maurice Quentin de La Tour.)

In physics, the kinetic energy of an object is the energy that it possesses due to its motion. [1] It is defined as the work needed to accelerate a body of a given mass from rest to its stated velocity. Having gained this energy during its acceleration, the body maintains this kinetic energy unless its speed changes. The same amount of work is done by the body when decelerating from its current speed to a state of rest. Formally, a kinetic energy is any term in a system's Lagrangian which includes a derivative with respect to time. [2] [3]

In classical mechanics, the kinetic energy of a non-rotating object of mass m traveling at a speed v is

. In relativistic mechanics, this is a good approximation only when v is much less than the speed of light.

The adjective kinetic has its roots in the Greek word κίνησις kinesis, meaning "motion". The dichotomy between kinetic energy and potential energy can be traced back to Aristotle's concepts of actuality and potentiality. [4]

The principle in classical mechanics that E ∝ mv2 was first developed by Gottfried Leibniz and Johann Bernoulli, who described kinetic energy as the living force, vis viva. Willem 's Gravesande of the Netherlands provided experimental evidence of this relationship. By dropping weights from different heights into a block of clay, Willem 's Gravesande determined that their penetration depth was proportional to the square of their impact speed. Émilie du Châtelet recognized the implications of the experiment and published an explanation. [5]

The terms kinetic energy and work in their present scientific meanings date back to the mid-19th century. Early understandings of these ideas can be attributed to Gaspard-Gustave Coriolis, who in 1829 published the paper titled Du Calcul de l'Effet des Machines outlining the mathematics of kinetic energy. William Thomson, later Lord Kelvin, is given the credit for coining the term "kinetic energy" c. 1849–1851. [6] [7] Rankine, who had introduced the term "potential energy" in 1853, and the phrase "actual energy" to complement it, [8] later cites William Thomson and Peter Tait as substituting the word "kinetic" for "actual". [9]

Kinetic energy may be best understood by examples that demonstrate how it is transformed to and from other forms of energy. For example, a cyclist uses chemical energy provided by food to accelerate a bicycle to a chosen speed. On a level surface, this speed can be maintained without further work, except to overcome air resistance and friction. The chemical energy has been converted into kinetic energy, the energy of motion, but the process is not completely efficient and produces heat within the cyclist.

The kinetic energy in the moving cyclist and the bicycle can be converted to other forms. For example, the cyclist could encounter a hill just high enough to coast up, so that the bicycle comes to a complete halt at the top. The kinetic energy has now largely been converted to gravitational potential energy that can be released by freewheeling down the other side of the hill. Since the bicycle lost some of its energy to friction, it never regains all of its speed without additional pedaling. The energy is not destroyed; it has only been converted to another form by friction. Alternatively, the cyclist could connect a dynamo to one of the wheels and generate some electrical energy on the descent. The bicycle would be traveling slower at the bottom of the hill than without the generator because some of the energy has been diverted into electrical energy. Another possibility would be for the cyclist to apply the brakes, in which case the kinetic energy would be dissipated through friction as heat.

Flywheels have been developed as a method of energy storage. This illustrates that kinetic energy is also stored in rotational motion.

Several mathematical descriptions of kinetic energy exist that describe it in the appropriate physical situation. For objects and processes in common human experience, the formula ½mv² given by Newtonian (classical) mechanics is suitable. However, if the speed of the object is comparable to the speed of light, relativistic effects become significant and the relativistic formula is used. If the object is on the atomic or sub-atomic scale, quantum mechanical effects are significant, and a quantum mechanical model must be employed.

In classical mechanics, the kinetic energy of a point object (an object so small that its mass can be assumed to exist at one point), or a non-rotating rigid body depends on the mass of the body as well as its speed. The kinetic energy is equal to 1/2 the product of the mass and the square of the speed. In formula form:

is the mass and

is the speed (magnitude of the velocity) of the body. In SI units, mass is measured in kilograms, speed in metres per second, and the resulting kinetic energy is in joules.

When a person throws a ball, the person does work on it to give it speed as it leaves the hand. The moving ball can then hit something and push it, doing work on what it hits. The kinetic energy of a moving object is equal to the work required to bring it from rest to that speed, or the work the object can do while being brought to rest: net force × displacement = kinetic energy, i.e.,

The kinetic energy of an object is related to its momentum by the equation:

For the translational kinetic energy, that is the kinetic energy associated with rectilinear motion, of a rigid body with constant mass

, whose center of mass is moving in a straight line with speed

, as seen above is equal to

Without vectors and calculus

the distance traveled by the accelerated object in time t, we find with

for the velocity v of the object

With vectors and calculus

where we have assumed the relationship p = m v and the validity of Newton's Second Law. (However, also see the special relativistic derivation below.)

Applying the product rule we see that:

Therefore, (assuming constant mass so that dm = 0), we have,

Since this is a total differential (that is, it only depends on the final state, not how the particle got there), we can integrate it and call the result kinetic energy. Assuming the object was at rest at time 0, we integrate from time 0 to time t because the work done by the force to bring the object from rest to velocity v is equal to the work necessary to do the reverse:

This equation states that the kinetic energy (Ek) is equal to the integral of the dot product of the velocity (v) of a body and the infinitesimal change of the body's momentum (p). It is assumed that the body starts with no kinetic energy when it is at rest (motionless).

) which is simply the sum of the kinetic energies of its moving parts, and is thus given by:

(In this equation the moment of inertia must be taken about an axis through the center of mass and the rotation measured by ω must be around that axis; more general equations exist for systems where the object is subject to wobble due to its eccentric shape).

A macroscopic body that is stationary (i.e. a reference frame has been chosen to correspond to the body's center of momentum) may have various kinds of internal energy at the molecular or atomic level, which may be regarded as kinetic energy, due to molecular translation, rotation, and vibration, electron translation and spin, and nuclear spin. These all contribute to the body's mass, as provided by the special theory of relativity. When discussing movements of a macroscopic body, the kinetic energy referred to is usually that of the macroscopic movement only. However, all internal energies of all types contribute to a body's mass, inertia, and total energy.

In fluid dynamics, the kinetic energy per unit volume at each point in an incompressible fluid flow field is called the dynamic pressure at that point. [11]

Dividing by V, the unit of volume:

is the dynamic pressure, and ρ is the density of the incompressible fluid.

This may be simply shown: let

be the relative velocity of the center of mass frame i in the frame k. Since

the kinetic energy in the center of mass frame,

would be simply the total momentum that is by definition zero in the center of mass frame, and let the total mass:

See also: Mass in special relativity and Tests of relativistic energy and momentum

If a body's speed is a significant fraction of the speed of light, it is necessary to use relativistic mechanics to calculate its kinetic energy. In special relativity theory, the expression for linear momentum is modified.

With m being an object's rest mass, v and v its velocity and speed, and c the speed of light in vacuum, we use the expression for linear momentum

is a constant of integration for the indefinite integral.

Simplifying the expression we obtain

is found by observing that when

resulting in the formula

This formula shows that the work expended accelerating an object from rest approaches infinity as the velocity approaches the speed of light. Thus it is impossible to accelerate an object across this boundary.

At a low speed (v ≪ c), the relativistic kinetic energy is approximated well by the classical kinetic energy. This is done by binomial approximation or by taking the first two terms of the Taylor expansion for the reciprocal square root:

So, the total energy

can be partitioned into the rest mass energy plus the Newtonian kinetic energy at low speeds.

When objects move at a speed much slower than light (e.g. in everyday phenomena on Earth), the first two terms of the series predominate. The next term in the Taylor series approximation

The relativistic relation between kinetic energy and momentum is given by

This can also be expanded as a Taylor series, the first term of which is the simple expression from Newtonian mechanics: [14]

This suggests that the formulae for energy and momentum are not special and axiomatic, but concepts emerging from the equivalence of mass and energy and the principles of relativity.

Using the convention that

where the four-velocity of a particle is

If the particle has momentum

as it passes by an observer with four-velocity uobs, then the expression for total energy of the particle as observed (measured in a local inertial frame) is

and the kinetic energy can be expressed as the total energy minus the rest energy:

Consider the case of a metric that is diagonal and spatially isotropic (gtt, gss, gss, gss). Since

where vα is the ordinary velocity measured w.r.t. the coordinate system, we get

Thus for a stationary observer (v = 0)

and thus the kinetic energy takes the form

Factoring out the rest energy gives:

In the Newtonian approximation to general relativity

where Φ is the Newtonian gravitational potential. This means clocks run slower and measuring rods are shorter near massive bodies.

In quantum mechanics, observables like kinetic energy are represented as operators. For one particle of mass m, the kinetic energy operator appears as a term in the Hamiltonian and is defined in terms of the more fundamental momentum operator

. The kinetic energy operator in the non-relativistic case can be written as

Notice that this can be obtained by replacing

in the classical expression for kinetic energy in terms of momentum,

In the Schrödinger picture,

The expectation value of the electron kinetic energy,

, for a system of N electrons described by the wavefunction

is a sum of 1-electron operator expectation values:

is the mass of the electron and

is the Laplacian operator acting upon the coordinates of the ith electron and the summation runs over all electrons.

is known as the von Weizsäcker kinetic energy functional.