Kenneth Lauren Burns [1] (born July 29, 1953) is an American filmmaker, known for his style of using archival footage and photographs in documentary films.

Burns's documentaries have earned two Academy Award nominations (for 1981's Brooklyn Bridge and 1985's The Statue of Liberty) and have won several Emmy Awards, among other honors.

Burns was born on July 29, 1953, [1] in Brooklyn, New York, the son of Lyla Smith (née Tupper) Burns, [3] a biotechnician, [4] and Robert Kyle Burns, at the time a graduate student in cultural anthropology at Columbia University in Manhattan. [3] The documentary filmmaker Ric Burns is his younger brother. [5] [6]

Burns's academic family moved frequently. Among places they called home were Saint-Véran, France; Newark, Delaware; and Ann Arbor, Michigan, where his father taught at the University of Michigan. [4] Burns's mother was found to have breast cancer when he was three, and she died when he was 11, [4] a circumstance that he said helped shape his career; he credited his father-in-law, a psychologist, with a significant insight: "He told me that my whole work was an attempt to make people long gone come back alive." [4] Well-read as a child, he absorbed the family encyclopedia, preferring history to fiction.

Upon receiving an 8 mm film movie camera for his 17th birthday, he shot a documentary about an Ann Arbor factory. He graduated from Pioneer High School in Ann Arbor in 1971. [7] Turning down reduced tuition at the University of Michigan, he attended Hampshire College in Amherst, Massachusetts, where students are graded through narrative evaluations rather than letter grades and where students create self-directed academic concentrations instead of choosing a traditional major. [4]

Burns worked in a record store to pay his tuition. Living on as little as $2,500 in two years in Walpole, New Hampshire, [8] Burns studied under photographers Jerome Liebling, Elaine Mayes, and others. He earned his Bachelor of Arts degree in film studies and design [9] in 1975. [4]

In 1976, Burns, Elaine Mayes, and college classmate Roger Sherman founded a production company called Florentine Films in Walpole, New Hampshire. The company's name was borrowed from Mayes's hometown of Florence, Massachusetts. Another Hampshire College student, Buddy Squires, was invited to succeed Mayes as a founding member one year later. [10] [11] The trio were later joined by a fourth member, Lawrence "Larry" Hott. Hott did not actually matriculate at Hampshire, but worked on films there. Hott had begun his career as an attorney, having attended nearby Western New England Law School. [10]

Each member works independently, but releases content under the shared name of Florentine Films. [12] As such, their individual "subsidiary" companies include Ken Burns Media, Sherman Pictures, and Hott Productions. Burns's oldest child, Sarah, is also an employee of the company as of 2020. [13] 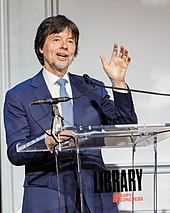 Burns speaks at the Library of Congress in 2019

Burns initially worked as a cinematographer for the BBC, Italian television, and others. In 1977, having completed some documentary short films, he began work on adapting David McCullough's book The Great Bridge, about the construction of the Brooklyn Bridge. [9] Developing a signature style of documentary filmmaking in which he "adopted the technique of cutting rapidly from one still picture to another in a fluid, linear fashion [and] then pepped up the visuals with 'first hand' narration gleaned from contemporary writings and recited by top stage and screen actors", [14] Burns made the feature documentary Brooklyn Bridge (1981), [15] which was narrated by David McCullough, and earned an Academy Award nomination for Best Documentary and ran on PBS in the United States.

Following another documentary, The Shakers: Hands to Work, Hearts to God (1984), Burns was Oscar-nominated again for The Statue of Liberty (1985). Burns frequently collaborates with author and historian Geoffrey C. Ward, notably on documentaries such as The Civil War, Jazz, Baseball, and the 10 part TV series The Vietnam War (aired September 2017).

In 2007, Burns made an agreement with PBS to produce work for the network well into the next decade. [16] According to a 2017 piece in The New Yorker, Burns and his company, Florentine Films, have selected topics for documentaries slated for release by 2030. These topics include country music, the Mayo Clinic, Muhammad Ali, Ernest Hemingway, the American Revolution, Lyndon B. Johnson, Barack Obama, Winston Churchill, the American criminal justice system, and African-American history from the Civil War to the Great Migration. [17] On April 5, 2021, Hemingway, a three-episode, six-hour documentary, a recapitulation of Hemingway's life, labors, and loves, debuted on the Public Broadcasting System, co-produced and directed by Burns and Lynn Novick. [18]

As of 2017 [update], Burns was residing in Walpole, New Hampshire, with his second wife, Julie Deborah Brown, [20] whom he married on October 18, 2003. She is the founder of the non-profit Room to Grow, which aids soon-to-be parents living in poverty. [20] They have two daughters, Olivia and Willa Burns.

Burns is a descendant of Johannes de Peyster Sr. through Gerardus Clarkson, an American Revolutionary War physician from Philadelphia, and he is a distant relative of Scottish poet Robert Burns. [21] [22] In 2014 Burns appeared in Henry Louis Gates's Finding Your Roots where he discovered that he is a descendant of a slave owner from the Deep South, in addition to having a lineage which traces back to Colonial Americans of Loyalist allegiance during the American Revolution. [23]

Burns is an avid quilt collector. About one-third of the quilts from his personal collection were displayed at The International Quilt Study Center & Museum at the University of Nebraska from January 19 to May 13, 2018. [24]

When asked if he would ever make a film regarding his mother Lyla, Burns responded: "All of my films are about her. I don't think I could do it directly, because of how intensely painful it is." [4]

In August 2009, Kennedy died, and Burns produced a short eulogy video at his funeral. In endorsing Barack Obama for the U.S. presidency in December 2007, Burns compared Obama to Abraham Lincoln. [28] He said he had planned to be a regular contributor to Countdown with Keith Olbermann on Current TV. [29] In 2016, he also gave a commencement speech for Stanford University criticizing Donald Trump. [30] [31] 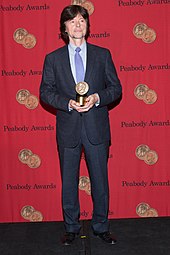 The Civil War received more than 40 major film and television awards, including two Emmy Awards, two Grammy Awards (one for Best Traditional Folk Album), the Producer of the Year Award from the Producers Guild of America, a People's Choice Award, a Peabody Award, a duPont-Columbia Award, a D. W. Griffith Award, and the $50,000 Lincoln Prize. [36] [37] [38]

In 1991, Burns received the National Humanities Medal, then called the Charles Frankel Prize in the Humanities.

In 1991, Burns received the Golden Plate Award of the American Academy of Achievement. [39]

In 2004, Burns received the S. Roger Horchow Award for Greatest Public Service by a Private Citizen, an award given out annually by Jefferson Awards. [40]

In 2008 Burns was honored by the Academy of Television Arts & Sciences with a Lifetime Achievement Award. [15]

In 2010, the National Parks Conservation Association honored him and Dayton Duncan with the Robin W. Winks Award for Enhancing Public Understanding of National Parks. The award recognizes an individual or organization that has effectively communicated the values of the National Park System to the American public. [41] As of 2010 [update], there is a Ken Burns Wing at the Jerome Liebling Center for Film, Photography and Video at Hampshire College. [42]

Burns was elected to the American Philosophical Society in 2011. [43]

In 2012, Burns received the Washington University International Humanities Medal. [44] The medal, awarded biennially and accompanied by a cash prize of $25,000, is given to honor a person whose humanistic endeavors in scholarship, journalism, literature, or the arts have made a difference in the world. Past winners include Turkish novelist Orhan Pamuk in 2006, journalist Michael Pollan in 2008, and novelist and nonfiction writer Francine Prose in 2010. [45]

In May 2015, Burns gave the commencement address at Washington University in St. Louis and received an honorary doctorate of humanities. [47]

Burns was the Grand Marshal for the 2016 Pasadena Tournament of Roses' Rose Parade on New Year's Day in Pasadena, California. [48] The National Endowment for the Humanities selected Burns to deliver the 2016 Jefferson Lecture, the U.S. federal government's highest honor for achievement in the humanities, on the topic of race in America. [49] He was the 2017 recipient of The Nichols-Chancellor's Medal at Vanderbilt University. [50]

In 2019, he received an honorary degree from Brown University. [51]

In 2022 he served as the Commencement speaker at the University of Pennsylvania and received an Honorary Doctor of Arts. [52]

Burns frequently incorporates simple musical leitmotifs or melodies. For example, The Civil War features a distinctive violin melody throughout, " Ashokan Farewell", which was performed for the film by its composer, fiddler Jay Ungar. One critic noted, "One of the most memorable things about The Civil War was its haunting, repeated violin melody, whose thin, yearning notes seemed somehow to sum up all the pathos of that great struggle." [53]

Burns often gives life to still photographs by slowly zooming out subjects of interest and panning from one subject to another. It has long been used in film production where it is known as the " rostrum camera"; notably, it was used decades prior to Burns's career in the Canadian documentary short " City of Gold". An example of the technique as deployed by Burns: in a photograph of a baseball team, he might slowly pan across the faces of the players and come to rest on the player who is the subject of the narration. This technique, possible in many professional and home software applications, is now termed the " Ken Burns effect" in Apple's iPhoto, iMovie, and Final Cut Pro X software applications. Burns stated in a 2009 interview that he initially declined to have his name associated with the software because of his stance to refuse commercial endorsements. However, Apple chief Steve Jobs negotiated to give Burns Apple equipment, which Burns donated to nonprofit organizations. [54]

As a museum retrospective noted, "His PBS specials [are] strikingly out of step with the visual pyrotechnics and frenetic pacing of most reality-based TV programming, relying instead on techniques that are literally decades old, although Burns reintegrates these constituent elements into a wholly new and highly complex textual arrangement." [9]

In a 2011 interview, Burns stated that he admires and is influenced by filmmaker Errol Morris. [55]

Conversation with Ken Burns about The Vietnam War. Video by the LBJ Library

These three short films are collected and distributed together as Seeing, Searching, Being: William Segal.

As an executive producer