listen); 9 January 1890 – 25 December 1938) was a Czech writer, playwright and critic. He has become best known for his science fiction, including his novel War with the Newts (1936) and play R.U.R. (Rossum's Universal Robots, 1920), which introduced the word robot. [1] [2] He also wrote many politically charged works dealing with the social turmoil of his time. Influenced by American pragmatic liberalism, [3] he campaigned in favor of free expression and strongly opposed the rise of both fascism and communism in Europe. [4] [5]

Though nominated for the Nobel Prize in Literature seven times, [6] Čapek never received it. However, several awards commemorate his name, [7] [8] such as the Karel Čapek Prize, awarded every other year by the Czech PEN Club for literary work that contributes to reinforcing or maintaining democratic and humanist values in society. [9] He also played a key role in establishing the Czechoslovak PEN Club as a part of International PEN. [10]

Čapek died on the brink of World War II as the result of a lifelong medical condition. [11] His legacy as a literary figure became well established after the war. [4] 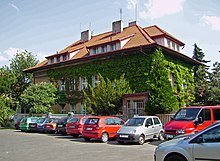 Karel Čapek was born in 1890 in the village of Malé Svatoňovice in the Bohemian mountains. However, six months after his birth, the Čapek family moved to their own house in Úpice. [12] Karel Čapek's father, Antonín Čapek, worked as a doctor at the local textile factory. [13] Antonín was a very active person; apart from his work as a doctor, he also co-funded the local museum and was a member of the town council. [14] Despite opposing his father's materialist and positivist views, Karel Čapek loved and admired his father, later calling him “a good example... of the generation of national awakeners”. [15] Karel's mother, Božena Čapková, was a homemaker. [13] Unlike her husband, she did not like life in the country, and she suffered from long-term depression. [14] Despite that, she assiduously collected and recorded local folklore, such as legends, songs and stories. [16] Karel was the youngest of three siblings. He would maintain an especially close relationship with his brother Josef, a highly successful painter, living and working with him throughout his adult life. [17] His sister, Helena, was a talented pianist who later become a writer and published several memoirs about Karel and Josef. [18]

After finishing elementary school in Úpice, Karel moved with his grandmother to Hradec Králové, where he started attending high school. Two years later the school expelled him for taking part in an illegal students' club. [13] Čapek later described the club as a "very non-murderous anarchist society". [19] After this incident he moved to Brno with his sister and attempted to finish high school there, but two years later he moved again, to Prague, where he finished high school at the Academic Grammar School in 1909. [13] [20] During his teenage years Čapek became enamored with the visual arts, especially Cubism, which influenced his later writing. [21] After graduating from high school, he studied philosophy and aesthetics in Prague at Charles University, but he also spent some time at the Friedrich Wilhelm University in Berlin and at the Sorbonne University in Paris. [13] [22] While still a university student he wrote some works on contemporary art and literature. [23] He graduated with a doctorate of philosophy in 1915. [24]

World War I and Interwar period

Exempted from military service due to the spinal problems that would haunt him his whole life, Čapek observed World War I from Prague. His political views were strongly affected by the war, and as a budding journalist he began to write on topics like nationalism, totalitarianism and consumerism. [25] Through social circles, the young author developed close relationships with many of the political leaders of the nascent Czechoslovak state, including Tomáš Garrigue Masaryk, Czechoslovak patriot and the first President of Czechoslovakia, and his son Jan Masaryk, [26] [27] who would later become minister of foreign affairs. T. G. Masaryk was a regular guest at Čapek's " Friday Men" garden parties for leading Czech intellectuals. Čapek was also a member of Masaryk's Hrad political network. [28] Their frequent conversations on various topics later served as the basis for Čapek's book Talks with T. G. Masaryk. [29] 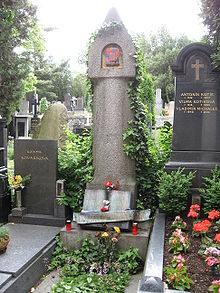 Tomb of Karel Čapek and Olga Scheinpflugová at Vyšehrad cemetery

Čapek began his writing career as a journalist. With his brother Josef, he worked as an editor for the Czech paper Národní listy (The National Newspaper) from October 1917 to April 1921. [30] Upon leaving, he and Josef joined the staff of Lidové noviny (The People's Paper) in April 1921. [31]

Čapek's early attempts at fiction were short stories and plays for the most part written with his brother Josef. [32] [33] Čapek's first international success was R.U.R., a dystopian work about a bad day at a factory populated with sentient androids. The play was translated into English in 1922, and was being performed in the UK and America by 1923. Throughout the 1920s, Čapek worked in many writing genres, producing both fiction and non-fiction, but worked primarily as a journalist. [25] In the 1930s, Čapek's work focused on the threat of brutal national socialist and fascist dictatorships; by the mid-1930s, Čapek had become "an outspoken anti-fascist". [25] He also became a member of International PEN Club. Established, and was the first president of the Czechoslovak PEN Club. [10]

In 1935 Karel Čapek married actress Olga Scheinpflugová, after a long acquaintance. [13] [34] In 1938 it became clear that the Western allies, namely France and the United Kingdom, would fail to fulfil the pre-war treaty agreements, and they refused to defend Czechoslovakia against Nazi Germany. Although offered the chance to go to exile in England, Čapek refused to leave his country – even though the Nazi Gestapo had named him "public enemy number two". [35] While repairing flood damage to his family's summer house in Stará Huť, he contracted a common cold. [30] As he had suffered all his life from spondyloarthritis and was also a heavy smoker, Karel Čapek died of pneumonia, on 25 December 1938. [33]

Surprisingly, the Gestapo was not aware of his death. Several months later, just after the German invasion of Czechoslovakia, Nazi agents came to the Čapek family house in Prague to arrest him. [11] Upon discovering that he had already been dead for some time, they arrested and interrogated his wife Olga. [36] His brother Josef was arrested in September and eventually died in the Bergen-Belsen concentration camp in April 1945. [37] Karel Čapek and his wife are buried at the Vyšehrad cemetery in Prague. The inscription on the tombstone reads: "Here would have been buried Josef Čapek, painter and poet. Grave far away." [35] 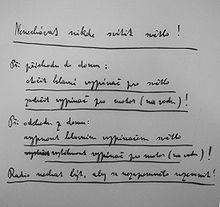 Karel Čapek wrote on a wide variety of subjects. His works are known for their precise description of reality. [38] Čapek is renowned for his work with the Czech language. [39] [40] He is known as a science fiction author, who wrote before science fiction became widely recognized as a separate genre. Many of his works also discuss ethical aspects of industrial inventions and processes already anticipated in the first half of the 20th century. These include mass production, nuclear weapons and intelligent artificial beings such as robots or androids. His most productive years were during The First Republic of Czechoslovakia (1918–1938).

From the 1930s onward, Čapek's work became increasingly anti-fascist, anti-militarist, and critical of what he saw as "irrationalism". [41]

Ivan Klíma, in his biography of Čapek, notes his influence on modern Czech literature, as well as on the development of Czech as a written language. Čapek, along with contemporaries like Jaroslav Hašek, spawned part of the early 20th-century revival in written Czech thanks to their decision to use the vernacular. Klíma writes, "It is thanks to Čapek that the written Czech language grew closer to the language people actually spoke". [17] Čapek was also a translator, and his translations of French poetry into the language inspired a new generation of Czech poets. [17]

His other books and plays include detective stories, novels, fairy tales and theatre plays, and even a book on gardening. [42] His most important works attempt to resolve problems of epistemology, to answer the question: "What is knowledge?" Examples include Tales from Two Pockets, and the first book of the trilogy of novels Hordubal, Meteor, and An Ordinary Life. He also co-wrote (with his brother Josef) the libretto for Zdeněk Folprecht's opera Lásky hra osudná in 1922. [43]

After World War II, Čapek's work was only reluctantly accepted by the communist government of Czechoslovakia, because during his life he had refused to accept communism as a viable alternative. He was the first in a series of influential non-Marxist intellectuals who wrote a newspaper essay in a series called "Why I am not a Communist". [44]

In 2009 (70 years after his death), a book was published containing extensive correspondence by Karel Čapek, in which the writer discusses the subjects of pacifism and his conscientious objection to military service with lawyer Jindřich Groag from Brno. Until then, only a portion of these letters were known. [45]

I read Karel Čapek for the first time when I was a college student long ago in the Thirties. There was no writer like him...prophetic assurance mixed with surrealistic humour and hard-edged social satire: a unique combination...he is a joy to read. [46] 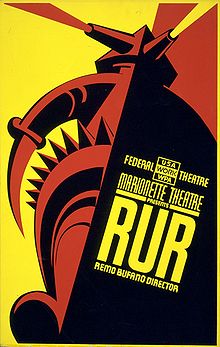 Karel Čapek introduced and made popular the frequently used international word robot, which first appeared in his play R.U.R. in 1920. While it is frequently thought that he was the originator of the word, he wrote a short letter in reference to an article in the Oxford English Dictionary etymology in which he named his brother, painter and writer Josef Čapek, as its actual inventor. [47] [48] In an article in the Czech journal Lidové noviny in 1933, he also explained that he had originally wanted to call the creatures laboři (from Latin labor, work). However, he did not like the word, seeing it as too artificial, and sought advice from his brother Josef, who suggested roboti (robots in English).

The asteroid 1931 Čapek, discovered by Luboš Kohoutek was named after him. [49]

Čapek received the Order of Tomáš Garrigue Masaryk, in memoriam, in 1991.