Julie Doiron (born June 28, 1972) is a Canadian singer-songwriter of Acadian heritage. [1] [2] She has been the bass guitarist and co-vocalist for the Canadian indie rock band Eric's Trip since its formation in 1990. She has released ten solo albums, beginning with 1996's Broken Girl, and is also the lead singer for the band Julie and the Wrong Guys.

Doiron started playing guitar (later switching to bass) in Eric's Trip at the age of 18, having joined the band at the insistence of her then-boyfriend, Eric's Trip guitarist Rick White. Shortly before the band's break-up in 1996, she released a solo album under the name Broken Girl, which followed two previous 7-inch EPs ("Dog Love, Pt. 2" & "Nora") also released under that name. All of her subsequent material has been released under her own name. She started her own label, Sappy Records, to release several of her solo efforts. [3] Although most of her solo material has been written and performed in English, she also released an album of French language material, Désormais, as well as several EPs of material sung in Spanish. 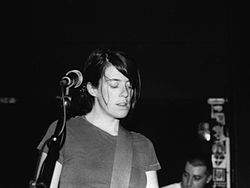 In 1999, Doiron performed at the 1999 Stardust Picnic festival at Historic Fort York, Toronto. [4] That year she recorded an album with the Ottawa band Wooden Stars, which was the first time she had worked with a band since the end of Eric's Trip. She shared a Juno Award for Julie Doiron and the Wooden Stars in March 2000.

Eric's Trip reunited in 2001, and have played shows periodically ever since. She has also appeared as a guest musician on albums by The Tragically Hip (2000s Music at Work), Gordon Downie (2001's Coke Machine Glow, 2003's Battle of the Nudes and 2010's The Grand Bounce), and Herman Düne. In 2006 she helped launch SappyFest with Paul Henderson and Jon Claytor as an extension of the reinstated Sappy Records. [5] She has also released a split record co-credited to the alternative country band Okkervil River, and collaborated with Frederick Squire and American musician Phil Elverum on the 2008 Mount Eerie album Lost Wisdom. She played with indie rock band Shotgun & Jaybird until their demise in 2007. She also played drums as part of a short-lived duo with Fred Squire. Initially called "Blue Heeler", they changed their name to "Calm Down Its Monday", and released a split 7-inch EP on K Records, with two solo Doiron songs on the flip side.

Apart from her musical career, Doiron is an avid photographer, having published a book of her photographs entitled The Longest Winter with words by Ottawa writer Ian Roy. [6] She often does her own promotional photos and cover artwork along with her ex-husband, painter Jon Claytor.

In 2009, Doiron told a reporter from The Strand, a college newspaper at the University of Toronto, that she and Chad VanGaalen were exploring the possibility of collaborating on an album. [10] She appeared on a track from VanGaalen's EP of Soft Airplane B-sides that year, but no further news pertaining to a potential album collaboration has been released.

During the tour to support the 2009 album I Can Wonder What You Did with Your Day, the mayor of Bruno, Saskatchewan proclaimed June 7, 2009, as "Julie Doiron Day". Doiron performed at the local All Citizens arts centre on that day. [11]

Over the three-year period between I Can Wonder and her 2012 album So Many Days, Doiron moved several times, residing at different times in Montreal, Toronto and Sackville. [12] While living in Toronto, she had difficulty making ends meet due to the city's high cost of living, [13] and began teaching yoga classes, and performing a weekly residency at the Saving Gigi club, to help pay the bills. [13] By the time So Many Days was released in the fall of 2012, she had moved back to Sackville. [14]

In July 2014, Doiron's song "The Life of Dreams", from I Can Wonder What You Did with Your Day, appeared in an iPhone commercial. [15]

In 2016, Doiron collaborated with musicians Jon McKiel, C.L. McLaughlin, Michael C. Duguay, James Anderson and Chris Meaney on the project Weird Lines, whose self-titled album was released on Sappy Futures in July. [16] She then collaborated with Eamon McGrath, Mike Peters and Jaye Schwarzer on the project Julie and the Wrong Guys, which released a self-titled album in 2017 on Dine Alone Records. [17] In 2017 and 2018, Doiron has also released several EPs of Spanish language renditions of her own previously recorded songs. [18]

In 2021 Doiron released the album I Thought of You. [19] Her first full-length solo recording in nine years, it includes musical contributions from Daniel Romano and Dany Placard. [19]

Albums marked with * have not been issued on vinyl LP

with Julie and the Wrong Guys