A journalist is an individual that collects/gathers information in form of text, audio or pictures, processes them to a news-worthy form and disseminates it to the public. The act or process mainly done by the journalist is called journalism.

Journalists can be broadcast, print, advertising, and public relations personnel, and, depending on the form of journalism, the term journalist may also include various categories of individuals as per the roles they play in the process. This includes reporters, correspondents, citizen journalists, editors, editorial-writers, columnists, and visual journalists, such as photojournalists (journalists who use the medium of photography).

A reporter is a type of journalist who researches, writes and reports on information in order to present using sources. This may entail conducting interviews, information-gathering and/or writing articles. Reporters may split their time between working in a newsroom, or from home, and going out to witness events or interviewing people. Reporters may be assigned a specific beat or area of coverage.

Matthew C. Nisbet, who has written on science communication, [1] has defined a "knowledge journalist" as a public intellectual who, like Walter Lippmann, David Brooks, Fareed Zakaria, Naomi Klein, Michael Pollan, Thomas Friedman, and Andrew Revkin, sees their role as researching complicated issues of fact or science which most laymen would not have the time or access to information to research themselves, then communicating an accurate and understandable version to the public as a teacher and policy advisor.

In his best-known books, Public Opinion (1922) and The Phantom Public (1925), Lippmann argued that most individuals lacked the capacity, time, and motivation to follow and analyze news of the many complex policy questions that troubled society. Nor did they often directly experience most social problems, or have direct access to expert insights. These limitations were made worse by a news media that tended to over-simplify issues and to reinforce stereotypes, partisan viewpoints, and prejudices. As a consequence, Lippmann believed that the public needed journalists like himself who could serve as expert analysts, guiding "citizens to a deeper understanding of what was really important". [2]

In 2018, the United States Department of Labor's Occupational Outlook Handbook reported that employment for the category, "reporters, correspondents and broadcast news analysts," will decline 9 percent between 2016 and 2026. [3]

Journalists sometimes expose themselves to danger, particularly when reporting in areas of armed conflict or in states that do not respect the freedom of the press. Organizations such as the Committee to Protect Journalists and Reporters Without Borders publish reports on press freedom and advocate for journalistic freedom. As of November 2011, the Committee to Protect Journalists reports that 887 journalists have been killed worldwide since 1992 by murder (71%), crossfire or combat (17%), or on dangerous assignment (11%). The "ten deadliest countries" for journalists since 1992 have been Iraq (230 deaths), Philippines (109), Russia (77), Colombia (76), Mexico (69), Algeria (61), Pakistan (59), India (49), Somalia (45), Brazil (31) and Sri Lanka (30). [5]

Apart from physical harm, journalists are harmed psychologically. This applies especially to war reporters, but their editorial offices at home often do not know how to deal appropriately with the reporters they expose to danger. Hence, a systematic and sustainable way of psychological support for traumatized journalists is strongly needed. However, only little and fragmented support programs exist so far. [8]

The relationship between a professional journalist and a source can be rather complex, and a source can sometimes have an effect on an article written by the journalist. The article 'A Compromised Fourth Estate' uses Herbert Gans' metaphor to capture their relationship. He uses a dance metaphor, "The Tango," to illustrate the co-operative nature of their interactions inasmuch as "It takes two to tango". Herbert suggests that the source often leads, but journalists commonly object to this notion for two reasons:

The dance metaphor goes on to state:

A relationship with sources that is too cozy is potentially compromising of journalists' integrity and risks becoming collusive. Journalists have typically favored a more robust, conflict model, based on a crucial assumption that if the media are to function as watchdogs of powerful economic and political interests, journalists must establish their independence of sources or risk the fourth estate being driven by the fifth estate of public relations. [9]

The worst year on record for journalists 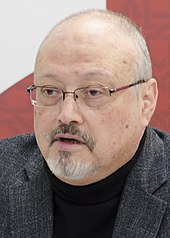 According to Reporters Without Borders' annual report, 2018 was the worst year on record for deadly violence and abuse toward journalists; there was a 15 percent increase in such killings since 2017, with 80 killed, 348 imprisoned and 60 held hostage. [10] [11]

Yaser Murtaja was shot by an Israeli army sniper. Rubén Pat was gunned down outside a beach bar in Mexico. Mexico was described by Reporters Without Borders as "one of world's deadliest countries for the media"; 90% of attacks on journalists in the country reportedly go unsolved. [12] Bulgarian Viktoria Marinova was beaten, raped and strangled. Saudi Arabian dissident Jamal Khashoggi was killed inside Saudi Arabia's consulate in Istanbul. [13]