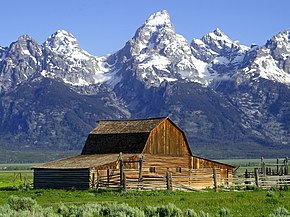 Looking west, the Teton Range rises more than 7,000 feet (2,130 m) above the valley floor with its iconic John Moulton Barn.

Jackson Hole (originally called Jackson's Hole by mountain men) is a valley between the Gros Ventre and Teton mountain ranges in the U.S. state of Wyoming, near the border with Idaho. The term "hole" was used by early trappers, or mountain men, as a term for a large mountain valley. These low-lying valleys, surrounded by mountains and containing rivers and streams, are good habitat for beavers and other fur-bearing animals. Jackson Hole is 55 miles (89 km) long by 6-to-13 miles (10-to-21 km) wide and is a graben valley with an average elevation of 6,800 ft (2,100 m), its lowest point being near the southern park boundary at 6,350 ft (1,940 m).

The town of Jackson was named in late 1893 by Margaret Simpson, who, at the time, was receiving mail at her home as there was no post office. She named the area in order for easterners to be able to forward mail west. Jackson, which became incorporated in 1914, was named after David Edward "Davy" Jackson, who trapped beaver in the area in the late 1820s with a partner in the firm of Smith, Jackson & Sublette. [1] Jackson, of Irish and Scottish descent, was one of the first European-Americans to spend an entire winter in the valley. [2]

Though the valley was used by Native Americans for hunting and ceremonial purposes, it was not known to harbor year-round human settlement prior to the 1870s. Descriptions of the valley and its features were recorded in the journals of John Colter, who had been a member of the Lewis and Clark Expedition. After returning to the Rocky Mountains, Colter entered the region in 1807 in the vicinity of Togwotee Pass and became the first European-American to see the valley. His reports of the valley, the Teton Range, and the Yellowstone region to the north were viewed by people of the day with skepticism. The first people to settle the region were Native Americans, then fur trappers, and then homesteaders. Because the soil is not ideal for raising crops, the valley was used for cattle grazing, and tourism quickly became popular with the establishment of dude ranches.

The only incorporated area in the valley is Jackson, located at its southern end. Other communities in the valley include Hoback, Kelly, Moose ( Moose Wilson Road), Moran Junction, Teton Village, and Wilson. West of Jackson, Teton Pass crosses the southern end of the Teton Range, providing access to Alta on the western side of the Tetons, as well as Victor and Driggs in Idaho. This area was known as Pierre's Hole and hosted the Rocky Mountain Rendezvous in 1832. Numerous elk use the valley for grazing during the winter, and sleigh rides are offered to tourists. The Jackson Hole Mountain Resort, Snow King, and Grand Targhee Resort ski areas, as well as the nearby Grand Teton and Yellowstone national parks, are major year-round tourist attractions. 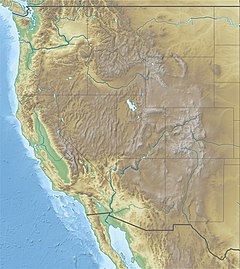 The valley is formed by the Teton Range to the west and the Gros Ventre Range to the east. Grand Teton National Park occupies the northwestern part of the valley, encompassing much of the Teton Range and Jackson Lake. The city of Jackson is at the southern end. Between them lies, on U.S. Route 26, "Glacier View Turnout" offering a view of Teton Glacier on the north of Grand Teton, [3] and the National Elk Refuge, home of the largest elk herd on earth. The Snake River threads through the entire valley from its headwater in Yellowstone in the north to the mouth of the Snake River Canyon at the southern tip of the valley. Blacktail Butte is a prominent landform rising from the valley floor. The average elevation of the valley is over 6,500 feet (2,000 m) above sea level.

High altitude and steep mountain slopes on all sides of the valley often cause calm winter nights to be very cold, as radiational cooling from snow-covered ground creates cold air near the surface, which then slides down into the valley due to the higher density of the air. In 1993, this effect during an already severe cold snap plunged the morning low temperature down to −56 °F (−49 °C) in the valley, officially recorded by the National Weather Service. The state record low temperature was also recorded in the valley at Moran at −66 °F (−54 °C) in 1933. Summers are warm to mild, due to the surrounding mountains.

Jackson Hole Airport is the largest and busiest commercial airport in Wyoming. The Jackson Hole Airport is also the only airport in the US that is located inside a National Park. [4] Strict noise abatement regulations and the terminal building's low profile allow for the airport to operate within federal guidelines inside Grand Teton National Park. However, it becomes difficult to fly in the winter months. Major airlines serve the valley with jet service, some of which is seasonal (summer and winter).

In 2016, the Jackson Hole Tourism website put up 20 live webcams of Jackson's town square in order to boost tourism. Since then, the audience of the live screening has grown rapidly, with up to 2,000 people watching at any one time. [5] [6]

Jackson Hole was rated in 2017 as the best campsite in Wyoming in a 50-state survey conducted by MSN.com. [7]

Films set and/or shot in Jackson Hole include 3 Bad Men (1926), The Big Sky (1952), The Wild North (1952), Shane (1953), Spencer's Mountain (1963), Any Which Way You Can (1980), The Mountain Men (1980), Rocky IV (1985), Dances with Wolves (1990), and Django Unchained (2012). [8] In seasons 3 & 4 of the HBO series Silicon Valley it's used as a recurring plot point for the characters of Gavin Belson and Jack Barker, though Jackson Hole itself is never seen in the show. It is also a major location in the video games The Last of Us (2013) and The Last of Us Part II (2020), in which Jackson itself is home to a large community of survivors in a post-apocalyptic world. [9] Rapper Kanye West recorded his album Ye (2018) while living in Jackson Hole; the album cover features a picture of the Teton mountains he had taken on his iPhone a few hours before the album's release. [10] Other albums were recorded here, such as Kids See Ghosts, Nas's project Nasir, and Pusha T's project Daytona. Teyana Taylor also recorded work on West's ranch.