Io Volcano Observer (IVO) is a proposed low-cost, outer-planet mission to explore Jupiter's moon Io to understand tidal heating as a fundamental planetary process. [1] The main science goals are to understand (A) how and where tidal heat is generated inside Io, (B) how tidal heat is transported to the surface, and (C) how Io is evolving. These results are expected to have direct implications for the thermal history of Europa and Ganymede as well as provide insights into other tidally heated worlds such as Titan and Enceladus. The IVO data may also improve our understanding of magma oceans and thus the early evolution of the Earth and Moon.

IVO is similar to the Io Orbiter concept suggested for the New Frontiers Program by the 2013–2022 U. S. National Research Council Planetary Science Decadal Survey. [2] The mission was proposed to NASA's Discovery Program by the University of Arizona and Johns Hopkins University's Applied Physics Laboratory in 2010, 2015, and 2019. [3] [4] [5] IVO was also proposed to NASA's Discovery & Scout Mission Capability Expansion (DSMCE) in 2007 and awarded a concept-study in 2009. [6] [7]

In 2020, IVO was selected along with three other Discovery proposals for further study, with one or two expected to be selected to fly. [8] In all cases the Principal Investigator has been Alfred McEwen. However, IVO and Trident were passed over in the Discovery 15 and 16 selection phase in favor of DAVINCI+ and VERITAS, both missions to Venus. [9]

Jupiter, Io, and Europa by Voyager 1

The proposed baseline launch would allow a MEGA (Mars-Earth Gravity Assist) trajectory, using a gravity assist at both Mars and Earth to reach Jupiter in August 2033. [1] Following a flyby of Io on its way in, the Io Volcano Observer would execute a Jupiter orbital insertion burn to go into an inclined orbit around Jupiter. During the remainder of the primary mission, IVO would encounter Io nine times over four years. During each of these encounters, the spacecraft would approach Io from over its north polar region, make its closest approach to Io near its equator at an altitude between 200 and 500 kilometers, and leave Io over its south polar region. [1] The time and location of closest approach are carefully optimized to obtain the clearest observations of Io's induced magnetic field, libration amplitude, and gravity field. Erupting volcanoes will be observed in sunlight and in darkness to best constrain the lava compositions. The distribution of heat emanating from Io will be measured from polar perspectives that were not seen by the Galileo spacecraft and cannot be observed from Earth. IVO will also sample the complex mix of ionized and neutral molecules of plasma and gas around Io. The spacecraft is being designed to survive the primary mission with ample margin which could allow various types of extended missions. 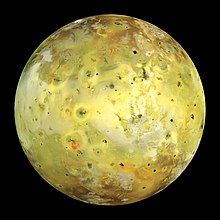 The current hyperactive geology of Io is of great scientific interest in and of itself but IVO seeks to understand fundamental processes that have implications far beyond this very unusual moon. The theme connecting the diverse science to be done at Io is "Follow the Heat."

There is a continuing debate about where the tidal heat is produced within Io with some observations suggesting that it is primarily in the shallow mantle while others suggest that the heating is broadly distributed. It is also unclear how much of the heating is from deforming solid rock versus pushing liquid magma around.

There is evidence suggesting that there is a global layer of melt (sometimes called a magma ocean) under Io's frozen crust but there are also reasons why such a layer of melt cannot persist. IVO uses four independent experiments to determine if a magma ocean exists and, if it does exist, measure its basic properties. Magma oceans are thought to have been common in the earliest history of most of the bodies in the inner Solar System so IVO may have the opportunity to investigate a key process that died about 4 billion years ago everywhere else in our solar system. It is also conceivable that some of the lessons learned about magma oceans may also be applicable to oceans of water within tidally heated icy moons of the outer solar system.

For example, the way Io loses its internal heat is very different from how the Earth and other rocky planets lose heat at this time. Io appears to lose almost all its heat via a " heat pipe" process through volcanic eruptions that cover about 1% of the surface of the body. On Earth, plate tectonics mixes large slabs of cold oceanic crust into the warm mantle. On the Moon and Mars, most of the current heat loss is by conduction through the crust. By examining how the cold 99% of Io's crust is involved in the heat pipe tectonics, IVO may have a window into how the early Earth, Moon, and Mars operated.

Follow the heat beyond Io bring IVO science to consider the effect tides have on the orbit of Io and the volcanic pollution it spreads across the Jovian system. Io, Europa and Ganymede have their tidal evolution locked to each other via the Laplace resonance, so the system is well-understood only if one combines measurements of all three moons. IVO, Europa Clipper, and JUICE would do precisely this. The tons of volcanic gasses stripped from Io every second is spread widely by Jupiter's powerful magnetic field. IVO will fly through this material providing new insight into how this material is removed and where it goes. This is the first step in understanding how the chemistry of Io has been altered from its initial state and may provide useful clues to how atmospheres on other bodies have evolved over time.

Overall, the IVO intends to use Io as a planet-sized natural laboratory to better understand processes that are important across the Solar System and even affect exoplanets.

The science objectives of this proposed mission are: [1]

IVO's highly capable science payload is all based on instruments that have been developed for other missions. [1]