Integral of the secant function Information

From Wikipedia
https://en.wikipedia.org/wiki/Integral_of_the_secant_function
Antiderivative of the secant function

In calculus, the integral of the secant function can be evaluated using a variety of methods and there are multiple ways of expressing the antiderivative, all of which can be shown to be equivalent via trigonometric identities,

This formula is useful for evaluating various trigonometric integrals. In particular, it can be used to evaluate the integral of the secant cubed, which, though seemingly special, comes up rather frequently in applications. [1]

Proof that the different antiderivatives are equivalent

The second of these follows by first multiplying top and bottom of the interior fraction by (1 + sin θ). This gives 1 − sin2 θ = cos2 θ in the denominator, and the result follows by moving the factor of 1/2 into the logarithm as a square root. Leaving out the constant of integration for now,

The third form follows by rewriting sin θ as −cos(θ + π/2) and expanding using the double-angle identities for cos 2x. It may also be obtained directly by means of the following substitutions:

The conventional solution for the Mercator projection ordinate may be written without the modulus signs since the latitude φ lies between −π/2 and π/2,

For broader coverage of this topic, see Mercator projection § History.

The integral of the secant function was one of the "outstanding open problems of the mid-seventeenth century", solved in 1668 by James Gregory. [2] He applied his result to a problem concerning nautical tables. [1] In 1599, Edward Wright evaluated the integral by numerical methods – what today we would call Riemann sums. [3] He wanted the solution for the purposes of cartography – specifically for constructing an accurate Mercator projection. [2] In the 1640s, Henry Bond, a teacher of navigation, surveying, and other mathematical topics, compared Wright's numerically computed table of values of the integral of the secant with a table of logarithms of the tangent function, and consequently conjectured that [2]

By a standard substitution (Gregory's approach)

A standard method of evaluating the secant integral presented in various references involves multiplying the numerator and denominator by sec θ + tan θ and then using the substitution u = sec θ + tan θ. [6] [7] This substitution can be obtained from the derivatives of secant and tangent added together, which have secant as a common factor. [8]

The derivative of the sum is thus equal to the sum multiplied by sec θ. This enables multiplying sec θ by sec θ + tan θ in the numerator and denominator and performing the following substitutions:

The integral is evaluated as follows:

as claimed. This was the formula discovered by James Gregory. [1]

By partial fractions and a substitution (Barrow's approach)

Although Gregory proved the conjecture in 1668 in his Exercitationes Geometricae, the proof was presented in a form that renders it nearly impossible for modern readers to comprehend; Isaac Barrow, in his Lectiones Geometricae of 1670, [9] gave the first "intelligible" proof, though even that was "couched in the geometric idiom of the day." [2] Barrow's proof of the result was the earliest use of partial fractions in integration. [2] Adapted to modern notation, Barrow's proof began as follows:

Substituting u = sin θ, du = cos θ dθ, reduces the integral to

By the tangent half-angle substitution

Hence, by the double-angle formulas,

As for the integral of the secant function,

The integral can also be derived by using a somewhat non-standard version of the tangent half-angle substitution, which is simpler in the case of this particular integral, published in 2013, [11] is as follows:

Substituting u = sin θ, du = cos θ dθ reduces the integral to

The reduced integral can be evaluated by substituting u = tanh t, du = sech2 t dt, and then using the identity 1 − tanh2 t = sech2 t.

The integral is now reduced to a simple integral, and back-substituting gives

which is one of the hyperbolic forms of the integral.

A similar strategy can be used to integrate the cosecant, hyperbolic secant, and hyperbolic cosecant functions.

It is also possible to find the other two hyperbolic forms directly, by again multiplying and dividing by a convenient term:

Secant is defined in terms of the complex exponential function as:

This allows the integral to be rewritten as:

Simplifies the equation to:

From here it's possible to solve using partial fractions:

Then we undo the substitution:

At this point it's important to know the exponential form of tangent:

Because the constant of integration can be anything, the additional constant term can be absorbed into it. Finally, if theta is real-valued, we can indicate this with absolute value brackets in order to get the equation into its most familiar form: 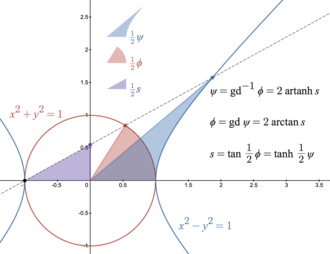 The integral of the hyperbolic secant function defines the Gudermannian function:

The integral of the secant function defines the Lambertian function, which is the inverse of the Gudermannian function:

These functions are encountered in the theory of map projections: the Mercator projection of a point on the sphere with longitude λ and latitude ϕ may be written [12] as: